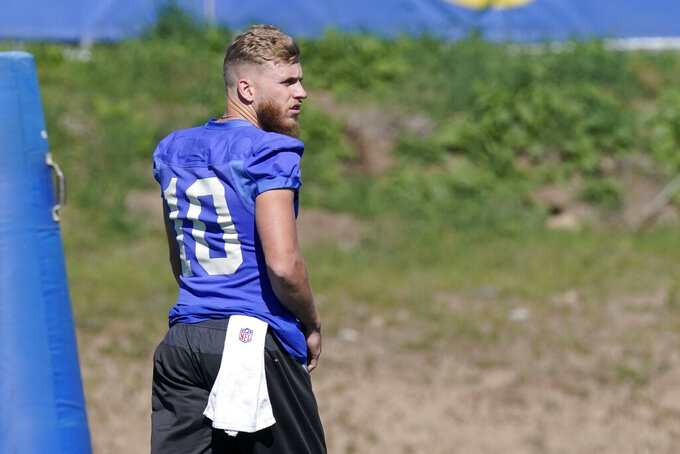 Give Aaron Rodgers a fourth AP Most Valuable Player Award.

The Green Bay quarterback who led the Packers to the best record in the NFL during the 2021 season, became the second player with at least four NFL MVPs; Peyton Manning won it five times.

Following offseason turmoil surrounding whether Rodgers wanted to play in Green Bay, then one of his worst career performances in an opening loss to New Orleans, Rodgers got rolling. So much so that he took his second straight award, receiving 39 votes from a nationwide panel of 50 media members who regularly cover the league.

The commotion continued in the regular season over Rodgers’ vaccination status -- he missed one game when testing positive for COVID-19 and needing a 10-day quarantine after earlier saying he had been “immunized.” But he pretty much shrugged it off and wound up throwing for 37 touchdowns, a league-low seven interceptions, an NFL-high 111.9 passer rating, while also dealing with a toe injury that limited his mobility.

Cooper Kupp has added the AP Offensive Player of the Year award to his triple crown of receiving for the 2021 season.

Kupp was so productive while working with a new passer, Matthew Stafford, that he had 14 games with at least 10 catches, no games with fewer than seven. Though he isn’t the fastest nor strongest wideout, he had 100 yards receiving in 11 contests.

Mike Vrabel found the answers to some unprecedented challenges in 2021, and that earned him AP Coach of the Year honors.

The Tennessee Titans were forced to use a record (for a non-strike season) of 91 players, lost their best player — running back Derrick Henry — for half the schedule, yet won the AFC South and the conference’s top seed.

Vrabel’s work through so many obstacles got him 36 votes from a nationwide panel of 50 media members who regularly cover the NFL. That easily beat Green Bay’s Matt LaFleur with eight in balloting revealed at NFL Honors. The Raiders’ Rich Bisaccia, an interim coach, was third with three votes, while Cincinnati’s Zac Taylor got two and New England’s Bill Belichick received one.

A year ago, the Titans’ defense was at or near the bottom in several statistical categories. This season, the Titans ranked second in run defense and sixth in both fewest points allowed and third-down efficiency.

In his four seasons at the helm, Vrabel has a 43-27 record. He’s the first Coach of the Year in franchise history.

Joe Burrow’s rookie season was cut short by a knee injury in his 10th game with a 2-7-1 record. The Bengals quarterback sure made up for that in 2021.

Burrow has won the AP Comeback Player of the Year award as he led Cincinnati’s worst-to-first improved in the AFC North. Burrow earned 28 votes from a nationwide panel of media who regularly cover the NFL, with Dallas QB Dak Prescott receiving 21 and Chargers safety Derwin James getting the other vote.

How good was Burrow in 2021? The 2020 first overall draft pick from LSU smashed single-season franchise records for passer rating (108.3), yards (4,611), TDs passing and 300-yard games (six). His precision passing ranked first in the league at a 70.4% completion percentage, and despite being sacked a league-high 51 times, Burrow had an 8.9 yards per attempt that also led the NFL.

Burrow, getting ready for Sunday’s Super Bowl, of course, is the second Bengal to take the award, which was announced at NFL Honors. Quarterback Jon Kitna won it in 2003.

Cincinnati wide receiver Ja’Marr Chase, as dynamic a newcomer to the NFL as anyone in recent years, has won the AP Offensive Rookie of the Year award.

In the Bengals’ worst-to-first AFC North rise, and then deep into the playoffs, Chase was a major contributor. The fifth overall pick in last April’s draft despite skipping the 2020 season at LSU due to the COVID-19 pandemic, Chase quickly silenced critics who believed Cincinnati should have taken an offensive lineman to protect quarterback Joe Burrow.

Instead, Burrow found his former LSU teammate 81 times for 1,455 yards with 13 touchdowns. Chase was a factor on every sort of route.

He is the third Bengals receiver to win the award, following Eddie Brown (1985) and Carl Pickens (1992).

Dallas linebacker Micah Parsons was so sensational in 2021 that he swept the voting for AP Defensive Rookie of the Year.

In balloting by a nationwide panel of media members who regularly cover the NFL and released Thursday night at NFL Honors, Parsons got all 50 votes. He’s the first defensive rookie to be a unanimous choice; Marcus Allen, Ben Roethlisberger and Anquan Boldin did it on offense.

Parsons, the 12th overall selection last April, skipped the 2020 season at Penn State due to the COVID-19 pandemic. But from the outset with the Cowboys, he not only was a starter but a playmaker and eventually an All-Pro.

Parsons even stepped in on the defensive line when edge rusher DeMarcus Lawrence broke his foot and Randy Gregory tested positive for COVID-19. He was just as punishing up front as he was versatile as a linebacker. He had 84 tackles and 13 sacks in becoming the first Cowboy to win the award.

T.J. Watt has made it a brother act for AP Defensive Player of the Year.

Watt, a unanimous All-Pro selection this season, follows his brother, who was the top defensive player in 2012, ’14 and ’15 with Houston.

Although he missed three games, Watt still got to the sacks mark set by Hall of Famer Michael Strahan — and Watt didn’t need Brett Favre taking a dive for the final sack. In all, Watt made 64 tackles despite battling an assortment of injuries.

Dan Quinn is staying in Dallas, accompanied by his AP Assistant Coach of the Year award.

Last month, the defensive coordinator for the Cowboys and former head coach in Atlanta told other teams interested in hiring him to guide them that he was going nowhere. He went somewhere in balloting by a nationwide panel of 50 media members who regularly cover the league — right to the top.

Quinn received 31 votes in results announced at NFL Honors. He was one of 12 assistants to get a selection, but second place was far back: Buffalo defensive coordinator Leslie Frazier with four.

A defensive coordinator for Seattle’s Super Bowl champion for the 2013 season, Quinn turned around a unit in Dallas. The Cowboys were seventh in scoring defense and second in the NFL in interception rate, with cornerback Trevon Diggs leading the league with 11 picks. Rookie linebacker Micah Parsons was a revelation under Quinn’s guidance.