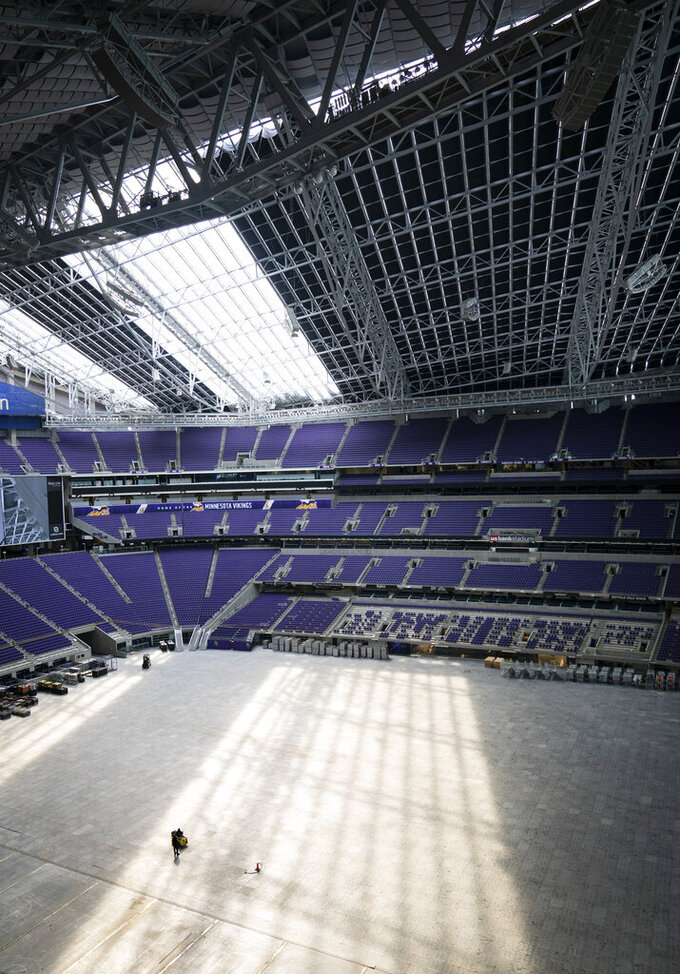 A portion of the rook is darkened with curtains as U.S. Bank Stadium in Minneapolis prepares for the NCAA college basketball Final Four, Tuesday, March 5, 2019. (Renee Jones Schneider/Star Tribune via AP)

MINNEAPOLIS (AP) — The losses last weekend by Duke, Gonzaga, Kentucky and Purdue pulled the curtains on their seasons, one painful game short of the Final Four.

Those teams that made it to Minneapolis ? The guys from Michigan State, Texas Tech, Auburn and Virginia will be greeted, literally, by giant drapes inside the building where the 2019 champion will be determined.

Yes, the bigger and fancier the site, the more complicated the conversion. From the extra speakers to the special center-hung scoreboard to the temporary blinds at U.S. Bank Stadium, turning a football-sized venue into a basketball-friendly facility has become quite the project.

That's fitting, of course, because the Final Four has become quite the event.

"People have said, 'It's a game for an arena,' but trying to go back at this point on the opportunities? Instead of giving approximately 5,000 tickets to each school, they'd be receiving far less than that, and then you've got all of the membership, the other schools that want access and the general public," said L.J. Wright, the NCAA's director of men's basketball championships. "The demand is still here, and so we want to expose and help grow the game through that exposure."

When the NCAA first began using an "in-the-round" seating configuration at Ford Field in Detroit in 2009, where the court is placed on the middle of the turf instead of in one of the corners and the entire bowl is used, the minimum-capacity requirement for a Final Four was raised to 60,000 seats.

That whittled the candidate pool to the 10 climate-controlled NFL-level venues, which had been sprinkled into the rotation throughout the 1980s and 1990s until the last NBA-sized host was used in East Rutherford, New Jersey, in 1996. There are currently only 10 covered stadiums big enough in the entire country to bid.

Nestled into a compact downtown, filled with state-of-the-art amenities and fresh from holding the Super Bowl 14 months ago, U.S. Bank Stadium fits the bill. The not-quite-3-year-old facility's defining feature, though, created an additional challenge for the host. The skyline-facing front of the building is essentially one big picture window, including five of the world's largest pivoting glass doors ranging from 75 to 95 feet high. Then there is the roof, about 60% of which is composed of a lightweight translucent plastic called ETFE .

Even on some of the coldest afternoons, like the 2-degree outside temperature at kickoff of the Super Bowl, enough sunlight can stream in to make a television viewer do a double-take and wonder for a second if the game is actually being played in Arizona or Florida.

"That's what makes this building unique. That's what makes it beautiful. That's what really makes it the gold standard in the NFL. Unfortunately, that is also what makes it very complex for us," said Patrick Talty, the general manager for stadium operator SMG. "Because of that competitive nature, needing the light to be the same for all teams in all situations, we then have to take our biggest asset away."

To keep the glare off the TV cameras and out of the eyes of the free-throw shooters, a darkening plan is mandated for each bidding venue. There is no issue for many of them, but at U.S. Bank Stadium, this sleek, steep and ship-shaped $1.1 billion home of the Minnesota Vikings, there is 460,000 square feet to cover.

The $4.6 million project, covered by the building's capital improvement fund, was so big the Minnesota Sports Facilities Authority split it between two manufacturers: theater-style curtains for the front and sailboat-like textile for the roof . Just one of the custom-made ceiling darkening panels is 10 feet wide and up to 370 feet long. The setup took five to seven days for 20 to 25 workers, with a similar timeframe for teardown.

The cost of the blinds and the altering of the building's identity have prompted some complaints from the public, but the blinds will be reused for concerts and conventions and are expected to last for the life of the stadium, MSFA chairman Michael Vekich said.

For now, the fabric will help transform the colossal structure into an environment as close to an on-campus arena as possible, if that's possible for an event that has averaged about 72,800 fans in attendance over the last 10 years. Putting 600 students from each school in $40 floor seats behind each basket was one way the NCAA has tried to increase the energy, along with subtly amplified noise for seats that are the farthest from the court so the swishes, clangs and squeaks can still be audible.

"Final Fours in the past used to be a little stagnant because you'd get people who sit on their hands who aren't as energetic," Wright said. "When you think of college basketball, you think of students on their feet and jumping. They're involved. They're a part of the event, so that's been a special thing."