A loss even uglier than usual for Taylor's reeling Bengals 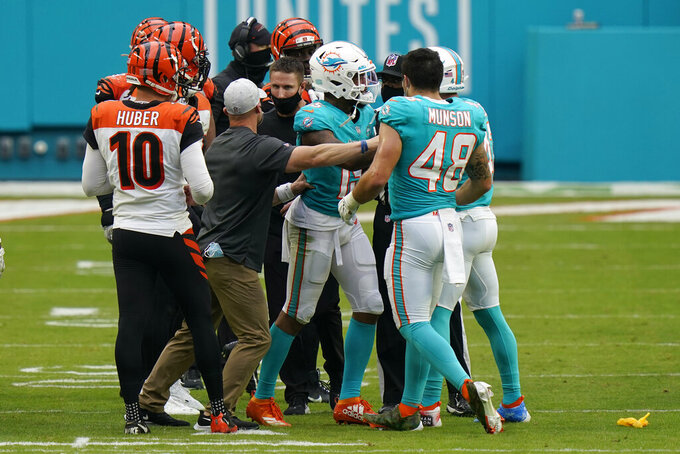 Cincinnati Bengals coaches and NFL referees separate players after a fight broke out during the second half of an NFL football game against the Miami Dolphins, Sunday, Dec. 6, 2020, in Miami Gardens, Fla. (AP Photo/Lynne Sladky)

MIAMI (AP) — After the whistle, the Cincinnati Bengals battled the Miami Dolphins to a standoff.

During play, the game was much less competitive.

The reeling Bengals put up a fight Sunday, but all that got them was a couple of ejections and a 19-7 loss that was even uglier than usual.

Cincinnati was on the verge of taking a 10-3 lead late in the first half when things began to unravel, as they tend to do for a team that is now 2-9-1.

“Our focus needs to be, we have to play better,” embattled coach Zac Taylor said. “That’s what frustrates me the most. There are going to be ugly games. ... We were not efficient enough in the third quarter.”

Cincinnati was outgained 181 yards to minus-4 in the pivotal third period. Miami rallied from a 7-6 halftime deficit to mount three consecutive scoring drives for a 12-point lead early in the fourth quarter.

The collapse was surrounded by lots of extracurricular activity. Bengals receiver Tyler Boyd and Dolphins cornerback Xavien Howard were ejected for trading punches after an incompletion late in the first half.

Three players, including Bengals safety Shawn Williams, were ejected following a bench-clearing confrontation in the fourth quarter. Even Cincinnati rookie receiver Tee Higgins found himself in that fray, which mostly involved shoving and shouting.

“I tried to go out there and separate guys,” Higgins said. “It’s hard to do. There are grown men out there; some of them are way bigger than me. But I've just got to still step in there and take over for my teammates. They’re family now; I’ll do anything for family.”

Cincinnati safety Jessie Bates tried to find a silver lining amid the unsightliness.

“It’s hard, obviously, when you’re losing," said. “The thing I like about what we’re doing is we just continue to fight.”

But the Bengals totaled just 196 yards, and 72 came on one play, when Boyd turned a short pass into a long gain for their only touchdown.

Cincinnati has lost four consecutive games, and perhaps all hope since top draft pick Joe Burrow’s season was ended by a knee injury two weeks ago. The ejections provided additional fodder for critics who say Taylor is losing control of his team.

“Our guys got put in some tough spots,” the second-year coach said. “Those are two core guys who got kicked out of the game, Shawn and T.B. We need those guys. Everyone has to maintain their composure, myself included. Shawn got hurt on a blindside block, and T.B. felt he got hit way late out of bounds. We've got to maintain our composure and be better than that.”

Other Cincinnati injuries in the fourth quarter compounded the messy finish. Brandon Allen, making his second start in place of Burrow, was sacked five times and departed with a chest injury, but said afterward he was fine. Of greater concern was left tackle Jonah Williams being carted off the field with a right knee injury.

Taylor declined to say whether he thought the officials lost control of the game, but said he spoke afterward with Miami coach Brian Flores, and they parted on good terms.

Taylor became the second NFL coach to go winless in his first 15 road games, according to Sportradar. Marty Mornhinweg went 0-16 in road games as the Detroit Lions' coach in 2001-02.