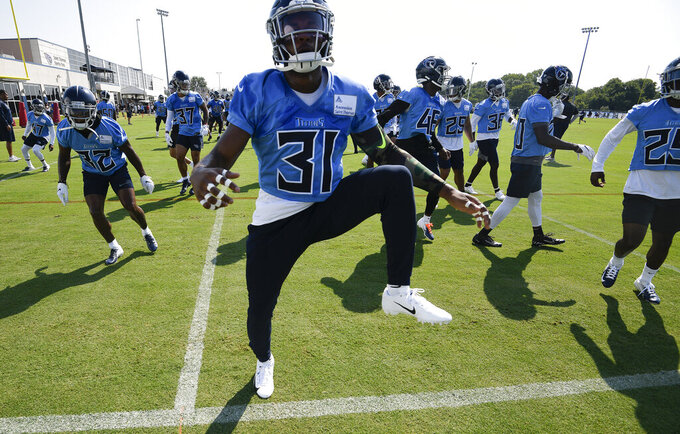 NASHVILLE, Tenn. (AP) — A new season, the very same goal remains for the members of the Tennessee secondary: Be the NFL's best.

"Of course that's the goal, that's the plan," Titans safety Kevin Byard said. "But we have to work on it ... There's a lot of potential, but that's another word for haven't done anything. We have to keep going, keep going and just work. I think if you keep working at the pace and the tempo we're going, I think it'll work out."

The Titans fell a bit shy of that lofty goal in 2018, even as they helped Tennessee post the league's sixth-stingiest defense against the pass. The secondary also came through with 10 of the team's 11 interceptions in 2018 led by Byard with four.

They believe they have a big advantage over last season. Everyone is back in the secondary with Byard who became the NFL's highest-paid safety with a contract extension at the start of training camp; cornerbacks Malcolm Butler, Logan Ryan and Adoree Jackson; and safety Kenny Vaccaro, an August injury replacement who signed his own four-year deal in March to return.

And coordinator Dean Pees is back to run his defense for a second straight season.

Ryan said that continuity should help a ton for a group that has no limits on how good they can be.

"We're just trying to get better each and every day," Ryan said. And I think the coaches are coaching us harder than they ever have right now because we have great expectations for ourselves, and we hold ourselves to a high standard on this team, the secondary does, and continue to push each other and work out all those kinks in practice."

The Titans allowed only 216.9 yards passing per game last season despite tying for 16th with 39 sacks . They tied Baltimore for eighth in fewest catches allowed (337), and only Minnesota (15) and Jacksonville (17) allowed fewer touchdown catches than Tennessee (21).

Secondary coach Kerry Coombs thinks being together for a second season will allow the Titans to do more and do it better.

Butler also believes he's past a busy 2018 that included being benched by New England during the Super Bowl in February of that year and signing a five-year deal worth more than $60 million in March. The cornerback struggled giving up the most touchdown passes (seven) and most yards receiving (618) of any cornerback in the league through the first eight games, according to Pro Football Focus.

He reverted to the form the Titans expected in the second half and finished with three interceptions and defending a team-high 13 passes. Butler says this is a bit of a fresh start for him, and he hopes to keep the momentum of how he finished last season.

Byard, who has 12 interceptions over the past two seasons, looks around the meeting room and likes what he sees.

"We have a lot of good athletes in this room ...," Byard said. "We should be real dominant this year."