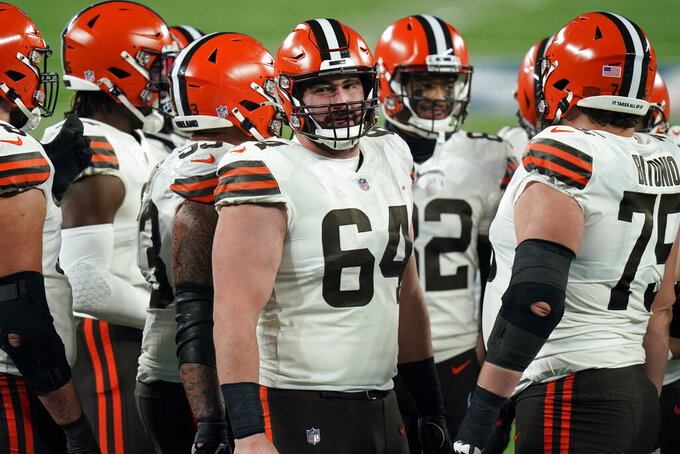 FILE - Cleveland Browns center JC Tretter (64) talks to teammates during the first half of an NFL football game against the New York Giants on Dec. 20, 2020, in East Rutherford, N.J. Tretter, the NFL Players Association president who has been pushing for daily COVID-19 testing all season, said he tested positive for the virus on Thursday, Dec. 23, 2021. (AP Photo/Seth Wenig, File)

The NFL worked around COVID-19 with pauses and postponements during a 2020 season that figured to be the worst in dealing with the virus.

Now the league — and its teams, coaches and players — are just working through coronavirus concerns in 2021, even with positive tests skyrocketing compared to late in the season a year ago.

Las Vegas and the Los Angeles Chargers are set for a playoffs-or-bust finale to the first 17-game regular season on Sunday. Masks and large meeting rooms — even virtual position-group gatherings — are as much a part of game plans as Xs and Os for those and other teams on the playoff bubble. Same for the teams already in.

“I’m worried about COVID just like the rest of the league is,” said Dallas coach Mike McCarthy, whose team clinched the NFC East in Week 16. “It’s just another variable in our league to be successful. The experience from last year is definitely beneficial. We’ll do the best we can with it.”

The Philadelphia Eagles are relieved they wrapped up a postseason berth over the weekend because 12 more players landed on the COVID-19 reserve list Monday, including defensive tackle Fletcher Cox and tight end Dallas Goedert.

The league and players' union agreed to ease return-to-play guidelines as the focus shifted from isolating infected players to encouraging vaccine booster shots as the best way to deal with the highly contagious omicron variant.

There were nearly 600 confirmed positive COVID-19 cases among players and league personnel from Dec. 12 to 25 compared to about 100 from almost the same timeframe in 2020, according to NFL figures.

But the league has only postponed three games, all in Week 15 when two games were moved to Tuesday.

One of the postponements involved Cleveland after Baker Mayfield tested positive as part of an outbreak for the Browns, and the frustrated quarterback lashed out on Twitter as the league was negotiating possible changes to testing protocols.

The game was pushed back two days, and the Browns lost to Las Vegas 16-14. They were eliminated from the playoffs before losing at Pittsburgh on Monday night.

As the numbers escalated, the 10-day quarantine was reduced to five for players who test positive but aren't showing symptoms. The federal Centers for Disease Control and Prevention adopted similar guidelines about the same time.

“We wanted to go where the science was going, and I will say that that five-day period sort of mirrors the data we have been seeing in our own NFL testing data throughout the year,” Dr. Allen Sills, the NFL's chief medical officer, told the NFL Network. “So, it really wasn’t about player availability or roster numbers. It was, ‘What is the science telling us?’”

The changes helped the unvaccinated Carson Wentz of Indianapolis avoid becoming the latest starting quarterback to miss a game. The Colts lost to the Raiders anyway, and need a Week 18 victory over two-win Jacksonville to make the playoffs.

Kirk Cousins, also unvaccinated, and Minnesota weren't so lucky. He was out against Green Bay on Sunday, and the Vikings never had much of a chance in a last-gasp effort to keep their postseason hopes alive, losing 37-10.

Baltimore needs a victory over Pittsburgh this week to reach the playoffs, and the Steelers can stay alive with a win. New Orleans lost to Miami two weeks ago after a COVID-19 outbreak decimated the roster. Still, the Saints can advance if they beat Atlanta and San Francisco loses to the Los Angeles Rams.

“I think the players and staff here handled a lot of challenging things not always perfectly, but we have managed to keep our head above water, keep grinding, and keep fighting,” said Saints coach Sean Payton, whose team had another outbreak early in the season while also displaced because of damage in New Orleans from Hurricane Ida.

“You’re just looking at the number one goal, outside of winning the division, is making it to the postseason. We have the opportunity to do that this weekend. You just want to find a way to get into the tournament.”

NFL players are traditionally off on Friday nights for Sunday games, and the most recent one fell on New Year's Eve. It's safe to say that was a topic of conversation in locker rooms.

“I don’t think many guys are partying right now,” Dallas quarterback Dak Prescott said. “Now that you’re reminding me, there may be a young guy or two that may have the inkling to do that. So we’ll have to just make sure that everybody understands where we are in this season, where we’re trying to go, what the important things are right now.”

Tampa Bay won last season's Super Bowl in its home stadium with a pandemic-limited crowd of 25,000. While there hasn't been an indication of reducing capacity for the first Super Bowl in 70,000-seat SoFi Stadium in Inglewood, California, on Feb. 13, the competing teams won't arrive until late in the week just as they did last year in Florida.

The NFL also has the traditional extra week built into the playoff schedule, between the conference championship games and Super Bowl. There wasn't a need to adjust during the playoffs last season, but the positive cases all but disappeared as the postseason progressed.

Plenty of the player absences this season, particularly in December, have been late in the week, leaving a feeling of randomness as to whether teams will be missing star players. The anxiety will grow along with the stakes.

“To say that I’m not concerned wouldn’t be accurate,” Rams coach Sean McVay said last month as his team dealt with an outbreak. “I think you want to find out a little bit more because to my understanding, just looking at the landscape of the league, this was as bad as the outbreak has gotten.

“And the hard thing is for some of these guys — and I don’t want to get into the specifics just out of respect for the individuals — but for some of them, there’s no symptoms,” said McVay, whose team has qualified for the playoffs and can win the NFC West with a win over the 49ers or an Arizona loss to Seattle. “They feel great and that’s what’s unfortunate.”

The rules have been changing to try to adapt.