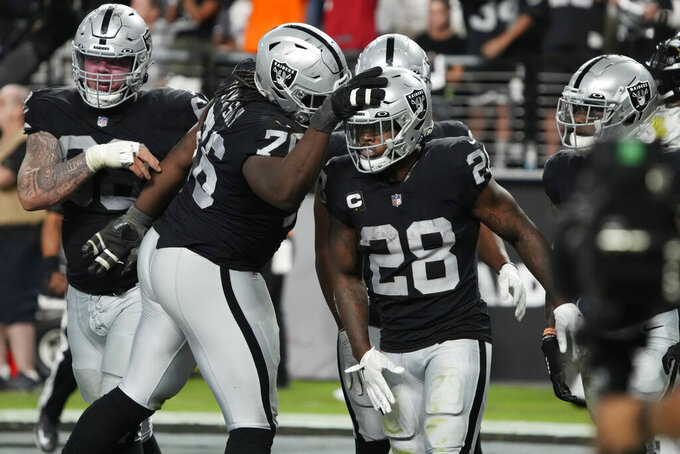 Las Vegas Raiders running back Josh Jacobs is doubtful to play this week against the Miami Dolphins because of an injured ankle.

Jacobs missed last week's game with the injury and has been unable to practice all week, leaving his availability for Sunday in serious doubt.

The Raiders will also be without left guard Richie Incognito, who will be sidelined a third straight week with a strained calf. Incognito got hurt in practice in August. Coach Jon Gruden had been hopeful he would be ready for the opener, but said Friday the team is being very careful.

Jacobs played through the injury in the opener, but the Raiders running game has struggled so far this season with injuries to the backs and the offensive line.

Las Vegas has the third-fewest rushing yards in the league through two weeks, and the running backs are averaging only 2.39 yards per carry.

Peyton Barber had 32 yards on 13 carries last week, while Kenyan Drake has 13 carries for 20 yards this season.

“We think we got to get them some better looks in the running game," Gruden said. "We misfired on some assignments. We got to play better. We got to run the ball better collectively, it’s not just the back and his statistical data. We got to block better. We got to call better plays. We got to execute better. And running the ball these first couple weeks has been obviously not good enough.”

NOTES: S Dallin Leavitt (concussion) and S Roderic Teamer (ankle) are out for the game. ... Rookie RT Alex Leatherwood (back) is set to play after leaving last week's game with an injury.