Red zone has been danger zone for Jets' offense this season 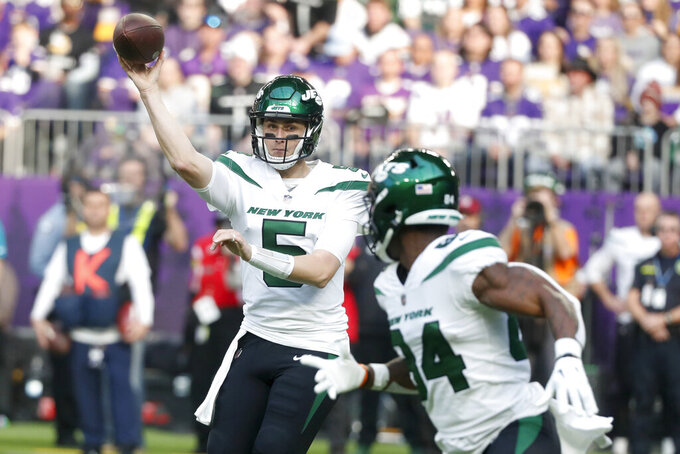 The New York Jets kept moving the football up and down the field against the Minnesota Vikings — until they got into the red zone.

Inside the 20-yard line was trouble for the Jets on Sunday, with the offense scoring a touchdown just once in six tries. It made all the difference in New York's 27-22 loss, a game that felt like a win that got away.

“Yeah, 100%,” left tackle Duane Brown said Monday. "I'll start off by saying that's a really great team we played and I don't take anything away from them. They did what they had to do to get a win.

“But for us, offensively, to be able to put up that kind of yardage, you look at those yards and look at how well we executed, you’d look at that and think we came away with a win.”

New York rolled up 486 total yards at Minnesota, the Jets' highest output of the season — 20 more yards than they had in their 31-10 rout last week of Chicago.

The difference was they got four touchdowns in that one, including going 1 for 2 in the red zone. Against the Vikings, the Jets got into the end zone just once on Mike White's quarterback keeper on fourth-and-goal from the 1 that had to be confirmed by video review.

"Yeah, obviously, it just wasn't a good day in the red zone.”

New York ran 24 plays inside the Vikings 20 and gained only 36 yards.

“We were moving the ball really well, giving ourselves a chance,” Saleh said. “We just couldn't punch it in.”

The Jets (7-5) will need to do a much better job of that Sunday at Buffalo if they intend to keep pace in their playoff drive. The Bills are tied for third-best in points per game, so taking advantage of any opportunities inside Buffalo's 20 will be crucial.

“My job as a quarterback is to put our team in the best position, and that’s scoring in the red zone,” White said after the loss in Minnesota. “So it starts with me. You've got to figure out how to put the ball in the end zone. And if we can do that, you can win games.”

Greg Zuerlein's right leg. The Jets kicker booted five goals against the Vikings, including a franchise-record 60-yarder before halftime. That came a week after he tied the previous mark of 57 yards he shared with Chandler Catanzaro. While New York doesn't want to rely on too many field goals given their red zone woes, it has a consistently reliable kicker — something for which it has been searching the last several seasons.

Third-down efficiency. That goes for both sides of the ball. The Jets went just 3 of 16 in those situations against the Vikings, compounding the problems they had inside the 20. But the defense didn't do a good enough job getting off the field, allowing Minnesota to convert nine of their 18 third-down opportunities.

WR Garrett Wilson. The first-round pick has had a terrific season, with his 790 yards receiving just 54 shy of Keyshawn Johnson's franchise record for a rookie. But Wilson has elevated his game the last two weeks with White at quarterback. He has 13 catches and 257 yards receiving, including 119 after the catch, with six receptions gaining 15 or more yards during that two-game span.

TE Tyler Conklin. In his first season with the Jets after signing as a free agent, he got off to a good start by catching 18 passes for 140 yards in the first three games. But Conklin has just one game since with more than four catches, and he caught only two of his seven targets Sunday — including having a couple of passes go off his hands — for 9 yards.

RB Michael Carter missed the game at Minnesota with a lower ankle sprain. He'll be monitored throughout the week. Rookie Zonovan Knight filled in admirably as the starter Sunday, rushing for 90 yards on 15 carries and adding five catches for 28 yards.

350 — White threw for 369 yards, making him the fifth player with at least 350 yards passing in at least two of his first five career starts. He joined Cam Newton (three games), Jeff Blake (two), Kirk Cousins (two) and Jim Miller (two) as the only players to do so.

The Jets are still the No. 7 seed in the AFC playoff race and are looking to sweep the series against the AFC East-rival Bills for the first time since the 2016 season. Brown, who called it a “huge, huge game," was asked what a victory in Buffalo would say about this team.

“I feel we have people’s respect," Brown said. "I think people understand we’re legit and we’re a team to be reckoned with.”