Ricardo Allen wants to coach offense when his career ends 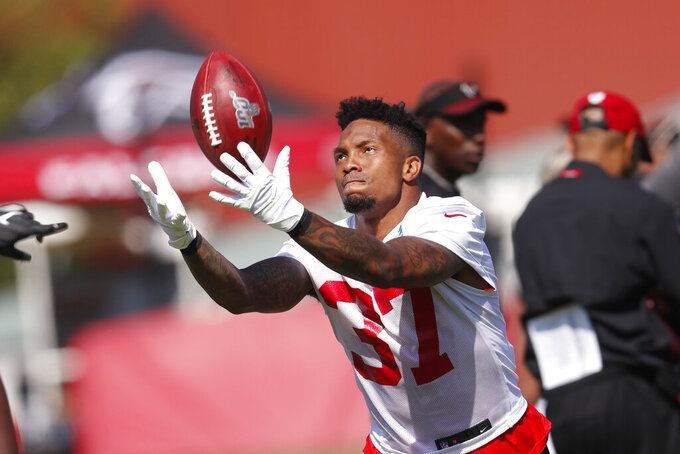 When his career ends, Allen wants to transition into coaching, but he has no interest in teaching defense. The career defensive back wants to become an offensive coordinator.

Allen made the most of his down time last year while spending the majority of the season on injured reserve with a torn Achilles. Considering himself a lifelong student of football, Allen broke down defenses across the NFL for about a month after surgery, but grew weary of the repetition and decided to delve into what makes an offense tick.

"I went back to the old school, back to Bill Walsh and the beginning of the West Coast (offense)," Allen said. "I went back to (former Falcons offensive coordinator Kyle) Shanahan when he was here and all the stuff he was running in practice.

Allen went so far recently during offseason training activities as to ask Falcons coach Dan Quinn if he could skip defensive meetings and instead sit in with the offense. Quinn, also the team's defensive coordinator, agreed, but with one stipulation.

"That part is not unusual for a guy to go to any length for any advantage (he) can get, but it was a first time for me of 'Hey, do you mind if I sit in the quarterbacks meetings?' " Quinn said. "I was like, 'You can, but you're not in there to ask questions.' "

Allen kept quiet during the sessions, but he had plenty of questions afterward and asked for one-on-time time with quarterback Matt Ryan.

"Later on in life, I'll probably try to transition over to probably being an offensive coordinator or be something," Allen said. "At least I can help. Hopefully I can play good enough, work good enough that I can make enough (money) with my body that I can choose who I want to learn under or I can choose to go to teams and just study and help the team grow."

Allen says he feels fully healthy after the Week 3 injury that resulted in his getting carted off the field against New Orleans. He has returned to a unit that ranked 25th in scoring and 27th against the pass.

Allen, a fifth-year starter, believes those numbers will improve in part because he's already seeing the benefits of his offensive study and putting his teammates in proper position before the snap.

"If you can figure out what offensive coordinators are doing and stuff like that, you ain't got to compete with the best players on the field," Allen said. "Like if you know the coach is going to come out in certain situations or certain parts of the field or a certain down and distance and they like to run certain type of plays, I don't go have to chase (star Falcons receiver) Julio (Jones) because I know I can't beat Julio man to man.

"But if I can give myself a chance because I have an understanding of what the offensive coordinator is teaching him, they can't just switch their plays on the field (after the snap). You don't get to just switch it up. You're a football player. You're accountable to your team. You've got to do what the coach is saying, so I'm going to try and beat you at that."