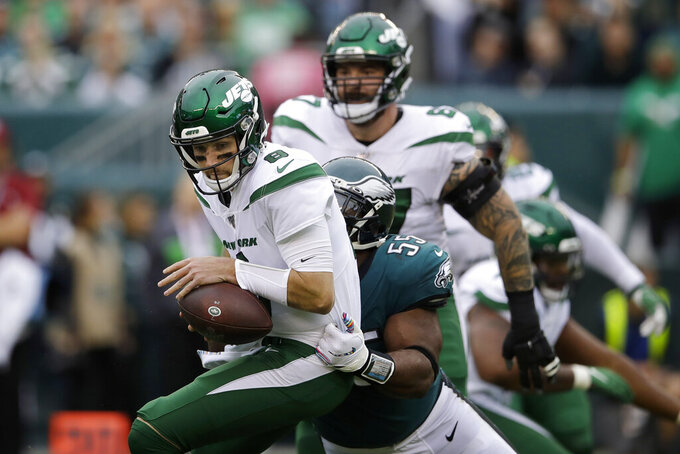 NEW YORK (AP) — The struggling and short-handed Jets returned to work Monday, still without a win but with their locker room remaining united.

At least, for now.

"This isn't the time to point fingers," defensive lineman Leonard Williams insisted during a conference call.

Maybe not, but with so many issues swirling around the team, it's certainly conceivable that the meeting rooms could soon become tension-filled sessions of blame passing. That's why several veteran leaders stood up in front of their teammates and implored them to stick together.

"They said they've been on teams that were definitely a lot worse than this," Williams said. "We have a lot of talent. We're 0-4 right now, but the season isn't over and we still have a lot to fight for."

Center Ryan Kalil, who came out of retirement in August to join the Jets, was one of those who spoke up. Williams said his words, in particular, stuck with him.

"We just have to stay levelheaded," Williams said of Kalil's message. "Not get too high when we win and not get too down when we lose and not be on a roller-coaster or anything like that. He's been in this league a long time, so hearing it from a guy like that meant a lot."

Williams wouldn't go into detail as to whether it was a players-only meeting or who else spoke, but it's clear the Jets are concerned about how things are going.

New York is off to its worst start in 16 years — matching the 2003 team under Herman Edwards that also opened 0-4 and came in between playoff seasons for the team. The Jets take on Dallas at home on Sunday and are staring at their first 0-5 start since 1996.

The return of Sam Darnold from his bout with mononucleosis remains on hold, with the quarterback scheduled to have tests Tuesday to determine if he'll be medically cleared to play.

If so, coach Adam Gase said Darnold will start. If not, it will be Luke Falk under center again.

The Jets were optimistic last week that Darnold would get the OK and gave him all the starting snaps in practice Wednesday and Thursday. But test results last Thursday night showed the swelling of his spleen had not yet dissipated enough, so Falk took the snaps with the starters Friday ahead of his second straight start.

Falk struggled along with the rest of the offense in the 31-6 loss to Philadelphia. He went 15 of 26 for 120 yards with two interceptions, and was sacked nine times.

"We took our turns, whether it was the quarterback not getting the ball out on time, we busted a route, the O-line not using protection the right way," Gase said. "There were a couple calls where no one was open. When I say that, it's what they ran on defense wasn't ideal for what they called. It wasn't pretty. It was a bad performance on the offensive side."

The defense. Gregg Williams' group has been a bit overshadowed by the ineptitude of the offense, but the Jets have been respectable — especially considering how little help the defense has gotten from the other side of the ball.

New York ranks 13th in overall defense and seventh against the run. That comes after mostly solid performances against Tom Brady and the Patriots two weeks ago and Carson Wentz and the Eagles on Sunday.

That's also despite not having inside linebacker C.J. Mosley since he injured his groin in the third quarter of the opener. The pass rush needs help, though, with only six sacks through four games. The return of outside linebacker Brandon Copeland from a four-game suspension could be a boost.

But ask anyone around the Jets what needs to get better — and fast — and the overwhelming answer is an easy one:

Demaryius Thomas. It wasn't an eye-popping performance, by any means, and the veteran wide receiver had an embarrassing whiff on a would-be long reception. But, Thomas made it back to the field after missing most of the last two games after injuring his hamstring early in Week 2 against Cleveland. He finished with four catches for a team-leading 47 yards, a sign the 31-year-old Thomas might be able to make an impact.

Ty Montgomery. The running back/wide receiver was expected to be a versatile complement to Le'Veon Bell in Gase's offense, but he has been barely used. Montgomery has only nine carries for 31 yards and three catches for 15 yards in an offense that desperately needs help. It has been a puzzling start for Montgomery, who was signed to a one-year deal in March.

Defensive end Henry Anderson has a shoulder injury that Gase said could be "week to week" and will depend a lot upon whether Anderson can play through the pain and discomfort.

Gase was uncertain whether Mosley would return to practice Wednesday. "We're just not sure how close we are," Gase said.

233 — That's how many yards of total offense the Jets have in their last two games — combined. With Falk starting, they had 105 against New England two weeks ago and 128 at Philadelphia.

Tuesday will be important for the Jets, with the latest round of tests helping determine Darnold's availability for the game against Dallas.

"It's probably more than just Sam getting out there," Gase said. "We've got a lot of other things to clean up. Sam's able to hide things sometimes for us, where if we make a mistake, he covers it up.

"I think we just need to do a better job as a group making sure we're all 11 on the same page."