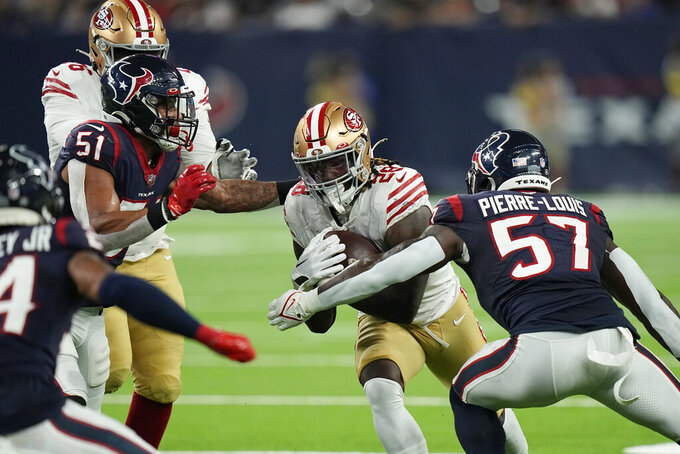 SANTA CLARA, Calif. (AP) — The San Francisco 49ers released running back Trey Sermon a year after trading up to draft him in the third round.

The move Wednesday to cut Sermon came when the Niners needed a roster spot after claiming offensive lineman Blake Hance off waivers from Cleveland.

Hance played all 17 games last season, including eight starts at tackle for the Browns. He struggled there but fared better this preseason after moving to guard and adds depth at a weak interior line for the 49ers.

San Francisco also signed tight end Tyler Kroft and defensive lineman Jordan Willis to one-year deals a day after cutting both of them to get down to the 53-man roster limit. To make room on the roster, the Niners placed safety Jimmie Ward (hamstring) and linebacker Curtis Robinson (ankle) on short-term injured reserve.

San Francisco had kept five running backs on the initial 53-man roster and Sermon became the odd man out when a spot was needed as he was behind starter Elijah Mitchell, Jeff Wilson Jr., third-round rookie Tyrion Davis-Price and undrafted rookie Jordan Mason.

The Niners traded two fourth-round picks for the 88th pick in 2021 to draft Sermon. He played nine games as a rookie and had 41 carries for 167 yards and a touchdown.

This is the latest example under coach Kyle Shanahan of a running back San Francisco invested in failing to produce as much as less heralded additions.

San Francisco used a fourth-round pick on Joe Williams in 2017 and cut him before he played a game and paid Jerick McKinnon $16.6 million for 16 games over three injury-plagued years. He rushed for 319 yards.

Meanwhile, the Niners have gotten a league-high 4,998 yards in the last five years from players who entered the league undrafted, with Matt Breida getting 1,902 yards and Wilson adding 1,265.

Mitchell became the starter last year after being drafted in the sixth round, leading the team with 963 yards on the ground.

Gutierrez doesn't count against the 16-man limit because he is part of the international pathway program, leaving four spots still open.