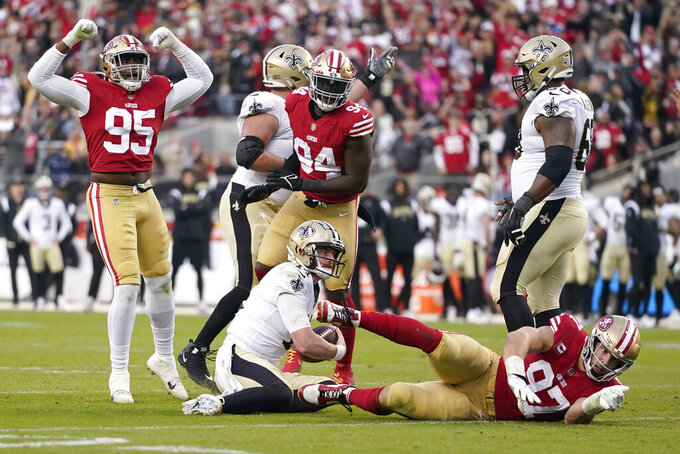 SANTA CLARA, Calif. (AP) — When San Francisco turned an opening-drive takeaway into a field goal, the 49ers' confident defense believed that would be enough scoring for a win.

"When you see the offense go out there and score points on the first drive, that’s immediately what we think of is, ’OK, they’re not going to score any more points,'” linebacker Dre Greenlaw said.

That bold proclamation proved prophetic when the Niners pitched their first shutout in three years, ending the NFL's fourth-longest scoring streak ever with a 13-0 victory over the New Orleans Saints on Sunday.

The performance that included two takeaways, two goal-line stands and the good fortune of a missed field goal is the latest evidence that this year's unit could be on par or better than the defense that carried San Francisco to a Super Bowl appearance in the 2019 season.

The Niners (7-4) have gone four straight games without allowing a point in the second half and lead the league in points allowed (15.7 per game), yards per play allowed (4.69 per play) and yards per game allowed (281.7).

“We’re on our way, for sure,” defensive end Nick Bosa said of exceeding the 2019 team. "We made it far that year and every single year, we want to get better. I think we have the guys who can do it definitely. Everybody who’s still here is a lot better since that year, so we definitely could be better.”

The defense was at its best when backed up to the goal line, forcing a fumble by Alvin Kamara at the goal line on one drive and getting a fourth-down sack from Bosa to end another drive.

“That’s just a testament to our fight," cornerback Charvarius Ward said. "We just need one blade of grass. No matter where they are on the 1-, 2- or 3-yard line. We just have to fight. We’re going to continue to fight, not let them get in the end zone no matter how close they get to it.”

Defense. The Niners are the eighth team since the merger to hold four straight opponents scoreless in the second half, according to the Elias Sports Bureau. Coordinator DeMeco Ryans' unit is strong on all three levels and is even doing a better job creating takeaways of late with five in the last three weeks.

Goal-to-go offense. The 49ers again struggled to finish drives, settling for a field goal on the opening possession after driving to the 5 and getting stopped on fourth-and-goal from the 1 in the second quarter. San Francisco ranks 30th in the league, scoring TDs on 56.5% of goal-to-go drives.

WR Jauan Jennings. While the other playmakers on San Francisco's offense get the attention, Jennings is always a reliable target in key spots. Jennings had four catches on third down Sunday as well as a touchdown on first down. Over the past two seasons, Jennings has turned 21 of his 32 targets on third down into first downs or touchdowns.

"Jauan’s clutch for us and he kept us out on the field a couple times and got us those points,” coach Kyle Shanahan said.

LG Aaron Banks. The 49ers O-line struggled against New Orleans' front with Banks being the biggest culprit. He allowed seven pressures in the game, according to Pro Football Focus, after giving up just 14 in the first 10 contests.

RB Elijah Mitchell sprained his MCL for the second time this season and will be out about six to eight weeks. He is eligible to go on IR for a second time and be activated if the Niners are still playing when he's recovered. ... RB Christian McCaffrey has knee irritation and will be managed during the week. ... RG Spencer Burford has a sprained ankle and Shanahan hopes he will be back later this week. ... DT Arik Armstead (foot, ankle) is expected to return to practice Wednesday.