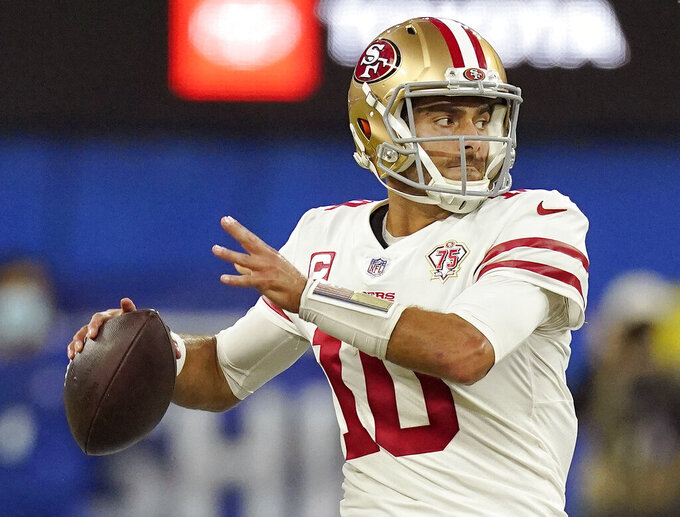 FILE - San Francisco 49ers' Jimmy Garoppolo throws during the second half of the NFC Championship NFL football game against the Los Angeles Rams, Jan. 30, 2022, in Inglewood, Calif. Garoppolo is staying in San Francisco after agreeing to a reduced contract to be the backup to Trey Lance on the 49ers. A person familiar with the deal said on condition of anonymity Monday, Aug. 29, 2022, that the sides are finalizing a deal to reduce Garoppolo's $24.2 million base salary for 2022. (AP Photo/Mark J. Terrill, File)

Shanahan then broached the topic with Garoppolo but never believed it would could to fruition.

“The chances were, to me, it seemed slim to none, just the possibility of that happening,” Shanahan said Tuesday. “I remember the first week of training camp me saying to Jimmy, ‘Hey, if you don’t like any of these opportunities, if you don’t go to the place you want, you can’t get the contract that you want, we would love to have you here as a backup. I want you to know that we feel that way but I also think there’s no way you’re not going to get something as this goes throughout training camp.'”

But when the preseason ended with no starting opportunities available elsewhere, that's just what happened. So Garoppolo agreed to stay in San Francisco on a reduced contract that makes the starter who helped the Niners reach two NFC title games in the past three seasons a backup behind the untested Trey Lance.

“We were always clear to Jimmy that salary cap-wise and a backup role and supporting Trey, if that worked for him, that was a no-brainer for us,” Shanahan said.

Instead of the nonguaranteed $24.2 million base salary Garoppolo was owed this season, he will get a $6.5 million fully guaranteed base salary, $500,000 in roster bonuses and the chance to make nearly $9 million more in playing time bonuses. The deal also includes a no-trade clause and prevents San Francisco from using the franchise tag on Garoppolo next offseason.

While that was a significant pay cut to what Garoppolo was owed on his original deal, it was likely more than he could have gotten as a backup on the open market and gave the Niners a proven backup in case Lance gets hurt or struggles in his first season as a starter.

“They were going to exhaust every opportunity,” Lynch said about Garoppolo’s representatives. “They waited it out. We waited it out. But he had been in communication and it came to fruition yesterday morning and was finished slightly after we got off the practice field.”

Garoppolo will now rejoin day-to-day activities with the 49ers after not attending any meetings since the end of last season and only throwing on his own on a side field during training camp.

Shanahan said that after five years in the system, Garoppolo should have no problem being ready when the season opens Sept. 11 in Chicago.

But he said nothing has changed in his belief that Lance is ready to be the starter after playing only sparingly as a rookie behind Garoppolo. The Niners set this plan in motion last offseason when they traded three first-round picks to draft Lance third overall.

“We feel very strongly giving the keys to Trey,” Shanahan said. “We felt that at the end of last year. We were really excited what we thought that could do for our team as a whole. And we’re excited about everything he’s done and all these opportunities he's gotten throughout this offseason. I can’t wait to get him started on our team in Week 1."

This will mark the first time since 1992 that a QB who started in a conference title game one year is a healthy backup on the same team the next season. Erik Kramer, who took over for an injured Rodney Peete in 1991, did that for Detroit when Peete regained his starting role in 1992.

The Niners ended up cutting Nate Sudfeld, who had a $2 million guaranteed salary, and kept seventh-round pick Brock Purdy as the third quarterback on the roster.

The Niners are expected to bring back Kroft and Willis later this week after placing safety Jimmie Ward (hamstring) and linebacker Curtis Robinson (ankle) on short-term IR.