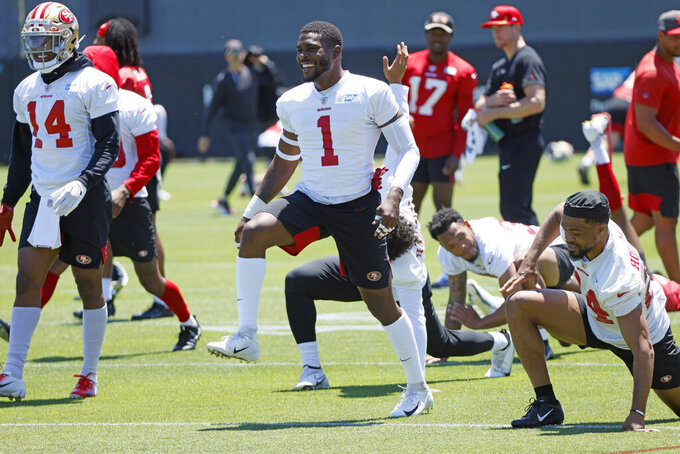 FILE - San Francisco 49ers defensive back Jimmy Ward (1) and teammates stretch during the NFL football team's practice Wednesday, June 1, 2022, in Santa Clara, Calif. 49ers safety Jimmie Ward pulled his hamstring and might not be ready to return for the season opener on Sept. 11 in Chicago. Coach Kyle Shanahan said that Ward got hurt in practice on Sunday, Aug. 15, 2022, and will likely be out at least a few weeks.(Santiago Mejia/San Francisco Chronicle via AP, File)

SANTA CLARA, Calif. (AP) — San Francisco 49ers safety Jimmie Ward pulled his hamstring and might not be ready to return for the season opener on Sept. 11 in Chicago.

Coach Kyle Shanahan said Ward got injured in practice Sunday and will likely be out at least a few weeks.

“It was a pretty bad hamstring injury,” Shanahan said before practice Monday. “We’ll see over the next couple of weeks how it plays out.”

The absence of Ward would be significant for the Niners after he has emerged in recent seasons as the anchor in the secondary at free safety.

Talanoa Hufanga is projected to step in as starter for the first time this season at the other safety spot, leaving veteran George Odum and Tarvarius Moore as the top internal options to replace Ward. Moore has 13 career starts but missed all last season with a ruptured Achilles.

Shanahan said the Niners could look into adding outside help, especially with versatile defensive back Dontae Johnson also sidelined by a rib injury.

Ward is the third 49ers player in recent days to go down with a hamstring injury in practice, joining cornerback Emmanuel Moseley and running back Elijah Mitchell. Offensive lineman Daniel Brunskill also injured his hamstring in the exhibition game against Green Bay and cornerback Charvarius Ward is out with a groin injury suffered in practice.

Those injuries are all considered less serious than Jimmie Ward's but the pattern is a concern for Shanahan.

“It’s been bothersome to me,” he said. “They've all come after days off. This has been a real challenge this camp. How it’s spaced out with these games and our day-off rules to really get into a groove for guys. ... Our biggest challenge is getting these off days and coming back from them.”

Jimmie Ward is coming off perhaps his best season in eight seasons in the NFL. He had a career-high two interceptions, including one returned for a TD, six passes defensed and 77 tackles. He also was one of the more dependable safeties in deep coverage in the league.

NOTES: Shanahan said there are no updates on the status of QB Jimmy Garoppolo, who won't travel with the team for joint practices in Minnesota this week as the Niners search for a trade partner. ... The 49ers released CB Darqueze Dennard, who began camp as the top slot cornerback but has been passed recently by rookie Samuel Womack. ... San Francisco also waived FB Josh Hokit, WR KeeSean Johnson and DL Tomasi Laulile. ... RT Mike McGlinchey will miss this week with a knee injury but Shanahan said it wasn't related to the torn quadriceps injury that knocked him out last season.