Adaptable Saints take on Falcons with a new starting QB 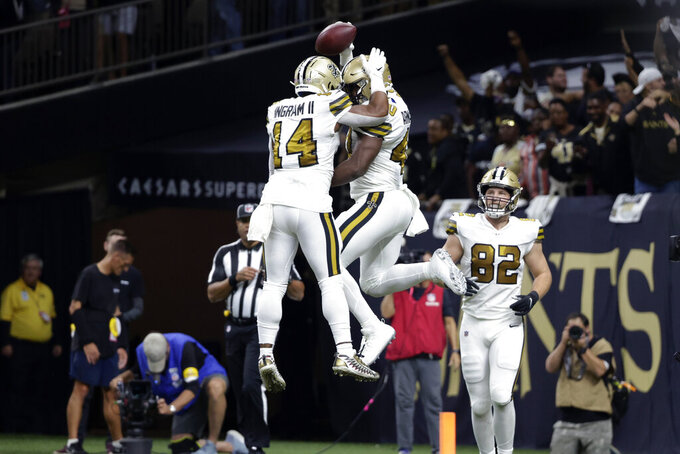 New Orleans Saints running back Alex Armah (40) celebrates his touchdown with running back Mark Ingram (14) in the first half of an NFL football game against the Tampa Bay Buccaneers in New Orleans, Sunday, Oct. 31, 2021. (AP Photo/Derick Hingle)

NEW ORLEANS (AP) — This past week was defined by bad news for the New Orleans Saints, who learned they'll have to manage for the rest of this season without starting quarterback Jameis Winston and top receiver Michael Thomas.

Yet New Orleans (5-2) heads into a Week 9 clash with Atlanta (3-4) on Sunday in the Superdome trying to move into a tie atop the NFC South. And based on recent history, the Saints have few reasons to doubt their chances of winning their fourth straight game.

The Saints have been trying to juggle the roster all season with a slew of injuries to prominent players, as well as a six-game suspension to top defensive tackle David Onyemata.

Peat is now on injured reserve and also could miss the rest of the season. He's been replaced by James Hurst, who sees the Saints players remaining well set up to contend for a fifth-straight NFC South title.

“It says a lot about the culture here and about the guys that are brought in from different teams or drafted,” said Hurst, now in his second season with New Orleans.

“The management and coaches here know what they are looking for,” Hurst added. “When you have a group of guys like that, it becomes a little easier to replace a guy here week-to-week.”

Now they must move forward without Winston at the most important position on the offense, but have two experienced options in Trevor Siemian, who relieved Winston in last weekend's triumph over Tampa Bay, and Taysom Hill, who has returned from a Week 5 concussion this week and went 3-1 last season while Drew Brees was injured.

Falcons first-year coach Arthur Smith figures the Saints will remain difficult to beat without Winston because of how adaptable they've been in recent years.

During the previous two seasons, the Saints went 8-1 without Brees and also showed they can win without the video game-type passing offense that defined most of the past decade-and-a-half that Sean Payton has coached in New Orleans.

“They’ve been the standard in this division for the last four years,” Smith said. "They've got, to me, one of the more successful coaches in football in the last 20 years.

“They’ve done it a bunch of different ways,” Smith added. “They continue to win, and we've got a heck of a challenge.”

While running back Alvin Kamara is the Saints' top offensive player with 480 yards and two TDs rushing to go with 256 yards and four TDs receiving, New Orleans could feature Mark Ingram a little more in his second week back with the team since his trade from Houston.

Ingram needs 63 yards to break the franchise's career rushing mark of 6,096 yards held by Deuce McAllister (who'll be in the radio broadcast booth). Ingram carried six times for 27 yards last week with an 11-yard first-down run on a scoring drive. He also had two catches for 25 yards.

Kamara, who has been close with Ingram since their first season as Saints teammates in 2017, is eager to see his friend make history.

“It’s super cool," Kamara said. “It’s something to tell your kids about.”

The World Series champion Atlanta Braves were below .500 until the first week of August. Quarterback Matt Ryan says it’s a good model for the 3-4 Falcons.

“I think there’s great parallels in sports,” Ryan said, noting that the Braves “started to play their best baseball toward the end. Started to come together as a team and rely and count on each other.”

He hopes the Falcons can follow a similar path.

“It’s little things that kind of change, the mindset, the culture, the attitude, and I do think you need to learn from others and how other teams have come together,” he said. “So, I certainly think guys use that as motivation or inspiration for, you know, us to be able to maybe pull ourselves together and get to a spot where we can be in the mix late in the year.”

It’s no surprise rookie Kyle Pitts has helped make Atlanta’s tight ends a productive group. The No. 4 overall pick in the NFL draft leads the team with 33 receptions for 484 yards.

Pitts, Hayden Hurst (142 yards) and Lee Smith (53) have the most combined receiving yards of any tight end group in the league with 679.

Pitts is looking to rebound from being held to two catches for 13 yards in last week’s loss to Carolina after topping 100 each of his two previous games.

With a 20-8 record against Atlanta, Payton has earned Ryan's respect.

“I’ve always had a respect for Sean and what he does and how he puts his players in position to be successful,” Ryan said. “They had a lot of continuity for a long time with Drew (Brees) there, but he’s done a great job of evolving and doing different things with different guys that he has had.”