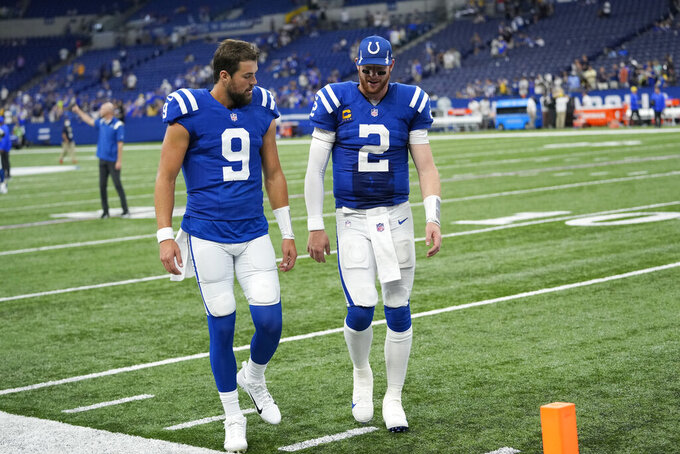 OPENING LINE: Titans by 5 1/2, according to FanDuel SportsBook

TURNOVER DIFFERENTIAL: Colts even; Titans minus-3.

COLTS PLAYER TO WATCH: QB Jacob Eason will make his first NFL start if Carson Wentz’s sprained ankles force him to sit out. Eason, a fourth-round pick in 2020, made his pro debut last week and was picked off on his second pass by 2020 All-Pro cornerback Jalen Ramsey.

TITANS PLAYER TO WATCH: DL Denico Autry. The lineman played three seasons with the Colts before signing with Tennessee this offseason. Autry has 1 1/2 sacks already in helping bulk up Tennessee's pass rush.

KEY MATCHUP: Derrick Henry vs. Colts run defense. Henry not only is coming off a game when he ran for 182 yards and three touchdowns, the reigning AP NFL Offensive Player of the Year also ran for 178 yards and three TDs in his last game against the Colts. Henry had 140 yards rushing by halftime of that game. The Colts are giving up 120.5 yards rushing a game.

SERIES NOTES: The Colts have dominated this series, but the Titans have won two of the last three. ... Colts coach Frank Reich is 4-2 with a different starting quarterback in each of his three previous seasons. ... Titans coach Mike Vrabel is 2-4 in this series. ... The road team has won each of the last five games. ... Both teams made the playoffs after splitting the season series in 2020.

STATS AND STUFF: Indy hasn’t started 0-3 since 2011. ... The Colts have committed five penalties for 41 yards, both league lows. ... Indy LB Darius Leonard needs 18 tackles to pass Rob Morris (445) for ninth on the franchise’s career list and 23 solo tackles for No. 300 in his career. ... Colts RB Nyheim Hines has caught at least one pass in 50 consecutive games, the third-longest streak among NFL running backs. ... WR Zach Pascal is tied for second in the league with three TD receptions. ... QB Ryan Tannehill had his 10th winning drive last week with the Titans, and no quarterback has had more since 2019. ... Henry had 237 yards from scrimmage last week and three TD runs. That's the most in the NFL this season. He has had at least 100 yards rushing in his last five division games. ... Julio Jones had 128 yards receiving for the 59th 100-plus game of his career. He's tied with Marvin Harrison for third in NFL history in 100-yard receiving games, trailing only Jerry Rice (76) and Randy Moss (64). ... The Titans had 33 first downs at Seattle, tied for the second-highest amount in franchise history and most since Nov. 10, 1991.

FANTASY TIP: Titans WR A.J. Brown. The Pro Bowler had a game to forget in Seattle that coach Mike Vrabel called “uncharacteristic” of the third-year receiver who caught only three of the nine passes thrown to him for 43 yards. The Colts should be tempted to double up Julio Jones coming off his big game, giving Brown more room to work.