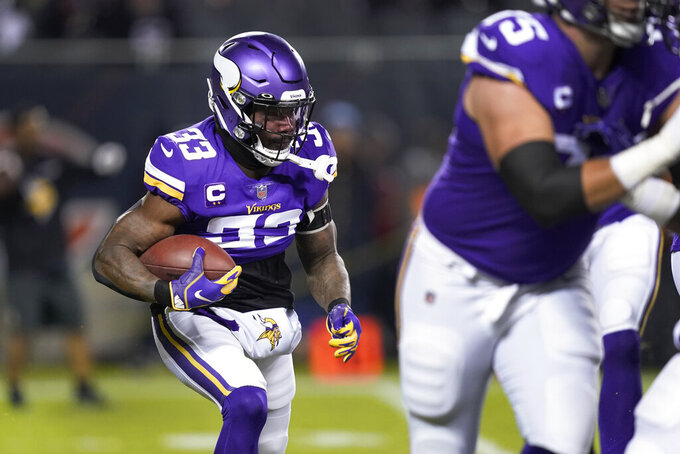 Minnesota Vikings running back Dalvin Cook carries the ball during the first half of an NFL football game against the Chicago Bears Monday, Dec. 20, 2021, in Chicago. (AP Photo/David Banks)

Josh Johnson joined the Ravens 10 days ago, and the well-traveled quarterback started his first game in 1,092 days with first place in the AFC North on the line Sunday at Cincinnati.

The Chargers didn’t have outside linebacker Joey Bosa, running back Austin Ekeler, receiver Mike Williams and center Corey Linsley when they faced the Texans. The Vikings were missing running back Dalvin Cook for their matchup against the Rams.

Several other teams also were missing key players on the reserve/COVID-19 list.

As the NFL’s regular season winds down, expect more teams to play important games without some of their starters because players continue to test positive despite the league’s revised protocols requiring less testing.

Baltimore, already missing 2019 NFL MVP Lamar Jackson and 10 other players due to injuries, lost backup quarterback Tyler Huntley and four others to the COVID-19 list, forcing Johnson to start against the Bengals.

The Ravens had no chance, even though Johnson was 28 of 40 for 304 yards with two touchdowns and one interception. They lost 41-21 to the Bengals and fell to 8-7, decreasing their playoff odds.

“It’s just challenging circumstances all the way around,” Ravens coach John Harbaugh said. “I thought our guys fought hard and did the best they could under the circumstances. That’s what you ask for. ... You want to be full strength. You always strive to be full strength with what you have, but that isn’t how the world works. That’s not the world we live in all the time. So, I’m sure that they’re full strength, and that’s good for them. But we’re not, and that’s just temporary. So, we’ll keep fighting and see what we can do next week.”

Somehow, the Texans rolled to a 41-29 win, damaging Los Angeles’ playoff hopes. The inconsistent Chargers (8-7) are tied with Baltimore and Las Vegas (8-7).

Without Cook, the Vikings struggled inside the red zone in a 30-23 loss to the Rams. The loss dropped Minnesota (7-8) out of a playoff spot, and the Vikings will need help, plus wins, to get in.

Other teams overcame their COVID-19 losses to earn victories Sunday.

The Chiefs had no trouble routing Pittsburgh 35-10 despite playing without Travis Kelce, kicker Harrison Butker and punter Tommy Townsend.

The Bills beat the Patriots on the road to move into first place in the AFC East without receivers Cole Beasley and Gabriel Davis, starting right guard Jon Feliciano and two assistant coaches.

The Jets had 20 players on the COVID-19 list and played without coach Robert Saleh, but they defeated Jacksonville in a game for draft positioning.

Eagles coach Nick Sirianni tested positive Wednesday morning, hours after a win over Washington on Tuesday night. But he cleared protocols Saturday and was on the sideline for Philadelphia’s 34-10 win over New York that vaulted the Eagles (8-7) into the No. 7 seed in the NFC.

As COVID-19 cases rise due to the omicron variant, the virus will be a major factor the final two weeks and into the postseason. The league updated protocols to allow players and coaches to return more quickly, but plenty of guys are still missing games.

Teams may want to consider taking extra precautions beyond the league’s mandates to put themselves in the best position to have the most players available because COVID-19 is an opponent that isn’t going away.