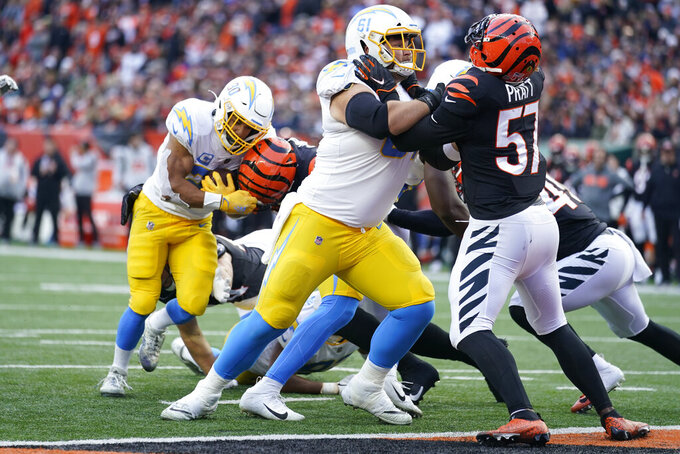 Los Angeles Chargers' Austin Ekeler (30) runs in for a touchdown during the second half of an NFL football game against the Cincinnati Bengals, Sunday, Dec. 5, 2021, in Cincinnati. (AP Photo/Michael Conroy)

CINCINNATI (AP) — Justin Herbert and the Los Angeles Chargers know how to bounce back after a tough stretch.

They've been doing it all season long.

Herbert passed for three touchdowns and Tevaughn Campbell returned a Joe Mixon fumble 61 yards for a score, helping the Chargers hold off Joe Burrow and the Cincinnati Bengals for a 41-22 victory on Sunday.

Herbert was 26 of 35 for 317 yards as Los Angeles (7-5) rebounded after losing 28-13 at Denver last weekend. Mike Williams had five receptions for 110 yards, and Keenan Allen caught two of Herbert’s TD passes.

The Chargers got off to a 4-1 start this season, and then dropped four of six. So when Cincinnati turned a 24-0 deficit into a tight game, Herbert and company kept their composure — then put the Bengals away.

“There is no flinch," Herbert said. "You know, it’s the NFL. Teams are good. They’re gonna come back and they’re gonna do everything they can to get back in the game. I thought the defense did a great job of coming up with that stop, that turnover and turning it into a touchdown.”

Allen helped key Los Angeles’ fast start, scoring twice in the first quarter on a 4-yard reception and a 7-yarder. Herbert’s 44-yard TD to Jaylen Guyton made it 24-0 early in the second quarter.

The Bengals (7-5) stormed back from there, trying to rally for their third straight win. Mixon’s 7-yard TD run made it 24-22 with 7:10 left in the third. But Mixon was stuffed on the 2-point conversion try and Campbell’s fumble return in the fourth helped close it out for Los Angeles.

“Today was a little bit uneven at times, but our guys played extremely hard,” Los Angeles coach Brandon Staley said. “We were outstanding against the run, against a really, really good back. I thought we defended in the passing game. I really thought we rushed the quarterback at a high level. It was all hands on deck in the pass rush.”

The Bengals committed four of the game’s seven turnovers. Playing with a dislocated little finger on his throwing hand for much of the day, Burrow threw two interceptions and lost a fumble.

The Bengals still had time, but Burrow was intercepted in the end zone by Chris Harris Jr. with 8:07 left. Cincinnati got the ball back again, but Burrow threw short to Tee Higgins on fourth-and-5.

Even after defensive end Joey Bosa went out with a head injury, the Chargers’ usually terrible run defense bottled up Mixon, who rushed for 54 yards after recording back-to-back 100-yard games.

Tee Higgins had nine receptions for 138 yards, including a 29-yard touchdown for Cincinnati’s first score of the game.

“That was a sloppy game all-around,” Bengals coach Zac Taylor said. “To get in a hole the way we did and the things that I did were unacceptable. We didn’t deserve to win.”

Burrow dislocated his pinky finger when he was sacked and fumbled on the Bengals’ first offensive series. He said it popped back into place on its own and didn't affect this passing.

Trainers tried tape and gloves to stabilize the injury, but nothing worked. He finally just played with nothing protecting it.

“I can’t imagine it getting any worse," he said. "If it doesn’t get worse, I’ll play next week.”

Chargers: Bosa departed for concussion protocol in the first quarter. Staley said Bosa did not have a concussion but was held out the rest of the game anyway. ... DL Justin Jones suffered a knee injury in the third and didn't return.

Bengals: LB Markus Bailey and LB Logan Wilson left in the first half with shoulder injuries. ... CB Chidobe Awuzie left with a right-foot injury in the third quarter and didn't return.