Another 2nd-half collapse by Dolphins in loss to Chargers 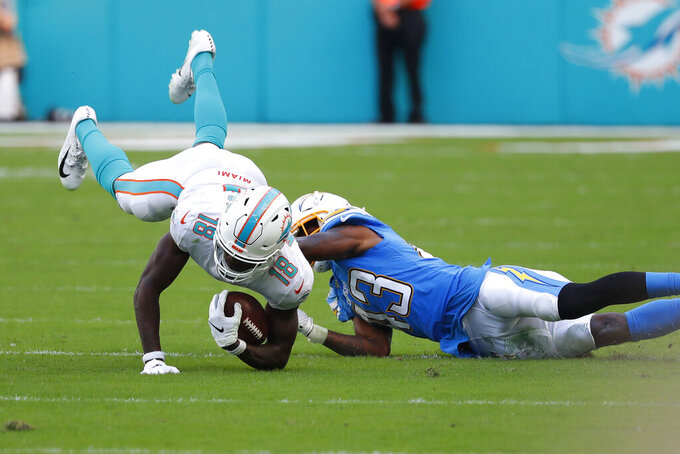 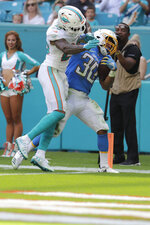 MIAMI GARDENS, Fla. (AP) — The Miami Dolphins are off to an awful start in part because they fade at the finish.

Miami has been outscored 81-0 in the second half this season, and the pattern persisted Sunday, when the Dolphins fell to 0-4 by losing to the Los Angeles Chargers, 30-10.

The Chargers led 17-10 at halftime and scored on their first three possessions of the second half, including a 10½-minute drive from which Miami never recovered.

"Same sad story," Dolphins running back Kenyan Drake said. "We've got to make the necessary adjustments in the second half like the opposite team does, and put ourselves in the best position to be competitive. We know it's a four-quarter game."

Three of Miami's losses have come at home, where sweltering September weather is supposed to give them a big advantage. Instead, it's the team accustomed to the humidity that's wilting.

"We're having a lot of trouble in a lot of areas in the second half," rookie coach Brian Flores said. "I don't think is a conditioning issue. I think it's an execution issue, a coaching issue. We have to coach better to put these guys in better positions. We'll do that."

Players differed on how much coaching might play a role. Cornerback Xavien Howard said not at all.

"We're just not getting the job done," he said. "We've got to come out with more energy in the second half. We've been in the last two games at halftime."

"It seems like we're coming out in the second half flat," safety Reshad Jones agreed. "I'm not sure why."

"Can anybody give me a definition of what coming out flat means?" he said. "All I know is the plays are there to be made. Some of us are not making plays. We have to be better collectively as a group, as an organization."

Not that the Dolphins have dazzled anyone in the first half. Overall they've been outscored 163-26, which is the NFL's worst four-game point differential since at least 1940.

They're on pace both to score the fewest points in a 16-game season, and to allow the most.

"There has been some progress over the first four games," Flores said. "These guys work hard. They fight hard. The effort is there. But there are opportunities that we should take."

Against Los Angeles, the Dolphins missed two field goals and still trailed by only a touchdown at halftime while totaling 197 yards.

But in the second half they gained just 36 yards. The Chargers' pressure up front took a toll as Josh Rosen threw for 21 yards with an interception and three sacks.

"I definitely made a couple of significant errors in the second half," Rosen said. "They started to heat up the pressure a little bit. We're figuring it out, and hopefully we'll give you a better second half next time."