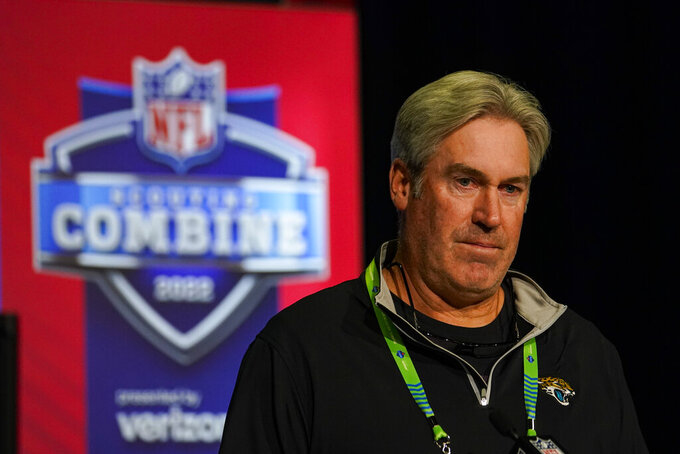 A person familiar with negotiations confirmed the moves. The person spoke to The Associated Press on condition of anonymity because NFL teams can’t announce free-agent signings until the new league year begins Wednesday.

Baalke took a big swing on Day 1, and even if he seemingly overpaid for some of the pending newcomers, he gave the team and its fans another feel-good moment nearly a year after drafting quarterback Trevor Lawrence.

All six additions will fill holes in Jacksonville, which has lost 35 of its past 41 games and is in rebuilding mode again under Baalke and new head coach Doug Pederson.

Kirk will replace DJ Chark as the team’s No. 1 receiver and should immediately become Lawrence’s top target. Kirk caught 236 passes for 2,902 yards and 17 touchdowns in four years with the Cardinals.

He is getting a four-year, $72 million contract in Jacksonville that could be worth up to $84 million, the person said. The deal includes a $20 million signing bonus.

Scherff, an All-Pro selection in 2020, will step in at right guard in place of free agent AJ Cann and allow Ben Bartch to switch sides and fill Andrew Norwell’s spot.

Jacksonville allowed 32 sacks in Lawrence’s rookie year. Keeping him upright and surrounding him with more playmakers were among the goals for Baalke and Pederson heading into free agency and the draft. When healthy, Scherff has proven to be one of the league’s premier guards.

Engram is getting a one-year, $9 million deal, the person said. He's expected to replace James O'Shaughnessy and be the team's top tight end, ahead of Dan Arnold and Chris Manhertz. Engram caught 262 passes for 2,828 yards and 16 TDs in five injury-filled seasons in New York.

The Jaguars added another pass-catcher for Lawrence on Monday night when Jones agreed to sign. He is getting a three-year, $24 million deal that could reach $30 million, according to NFL Network. Jones has 171 receptions for 1,884 yards and 11 TDs in five seasons with Buffalo and the Raiders.

Oluokun, who led the Falcons with 192 tackles last season, is getting a three-year, $45 million contract that includes $28 million guaranteed, the person said.

Fatukasi, who started 15 games for the Jets last season and has 115 tackles over the past three years, is getting a three-year, $30 million deal that includes $20 million guaranteed, the person said.

Jacksonville began the day with roughly $41 in salary cap space, and some wondered how aggressive Baalke and Pederson would be.

Baalke and former coach Urban Meyer took a value approach to free agency last year, and Baalke ultimately got blamed for it and was criticized for a less-than-sterling reputation. His last five NFL seasons ended with a coaching change: Meyer (2021), Doug Marrone (2020), Chip Kelly (2016), Jim Tomsula (2015) and Jim Harbaugh (2014).

The 57-year-old Baalke remained in place after Jaguars owner Shad Khan fired Meyer in mid-December, a move that irked fans enough for them to organize a “clown out” protest for the season finale against Indianapolis. A few hundred fans showed up dressed in colorful wigs, oversized bowties and red noses. Khan remained committed to Baalke after the “clown out," a decision that's paying off at the start of free agency.