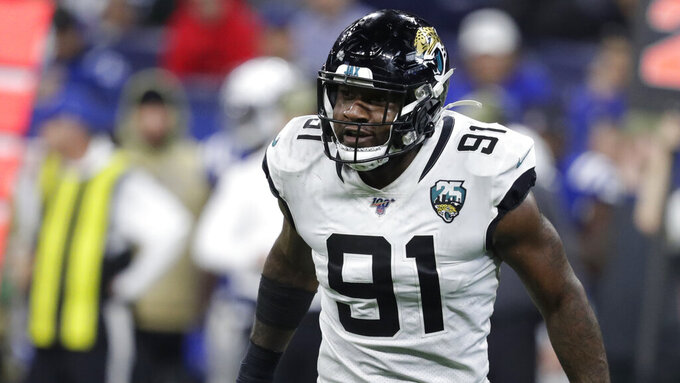 A person familiar with the trade says the Jaguars have agreed to send Ngakoue to the Minnesota Vikings for a second-round draft pick in 2021 and a conditional fifth-rounder in 2022. The person spoke to The Associated Press on condition of anonymity Sunday because the deal has not been formally executed with the league.

The person said Ngakoue agreed to rework his 2020 salary to get out of Jacksonville. Ngakoue still has to sign his one-year franchise tender with the Jaguars to make the deal happen. He had been the league's only franchise-tagged player unsigned, opting to turn down an offer that would have guaranteed him $17.8 million this season.

He will now make roughly $13 million in 2020, the person said. ESPN first reported the trade.

Ngakoue made it clear on several occasions this year that he no longer wanted to play in Jacksonville, even sparring with the team owner's son on Twitter. And Ngakoue left millions on the table to make it happen.

He will give the Vikings a young, proven pass-rusher opposite Danielle Hunter, one whose work ethic and intensity have always been among the most respected in Jacksonville's locker room. Ngakoue also should ease the loss of four-time Pro Bowler Everson Griffen, who signed a one-year deal with Dallas earlier this month.

Ngakoue could have signed with the Jags last summer and earned about $40 million guaranteed between 2019 and 2020. Instead, he will make roughly $15 million over those two seasons.

The 25-year-old Ngakoue didn’t believe Jacksonville's front office showed him enough respect considering what he did since joining the organization as a third-round draft pick in 2016.

He has 37 1/2 sacks and 14 forced fumbles in four seasons. The speedy strip-sack specialist made the Pro Bowl in 2017 and was an alternate the past two seasons. He clearly outplayed his $3.84 million rookie contract. He made $2.025 million in 2019 — far less than other top playmakers at his position.

Ngakoue insisted the day after the season ended that he’s “not going to play for pennies.” He had been seeking around $22 million a year to remain in Jacksonville, but the Jaguars never considered him a complete or elite defensive end worthy of that much annually.

Jacksonville also selected Ngakoue’s replacement, Josh Allen from Kentucky, with the seventh overall pick in the 2019 draft and added pass-rusher K'Lavon Chaisson this year. Allen had 44 tackles, 10 1/2 sacks and two forced fumbles as a rookie and made the Pro Bowl as an alternate.

Ngakoue is the second starter in the past year — arguably the team’s best two defenders — to essentially force his way out of Jacksonville. Pro Bowl cornerback Jalen Ramsey seemingly faked a back injury to get traded to the Los Angeles Rams last October.

He also is the latest piece of Jacksonville's 2017 defense, the one that helped the team make the AFC championship game, to hit the road. Ngakoue, Calais Campbell, A.J. Bouye, Marcell Dareus, Ramsey, Malik Jackson, Tashaun Gipson, Barry Church and Dante Fowler — a list that includes seven former Pro Bowlers — have been traded or cut in the past two years.