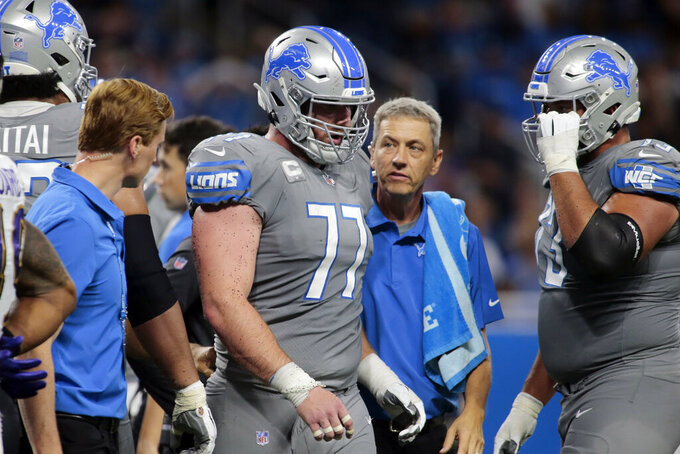 FILE - In this Sunday, Sept. 26, 2021, file photo, Detroit Lions center Frank Ragnow (77) walks to the sidelines after being injured in the second half of an NFL football game against the Baltimore Ravens in Detroit. Ragnow has a season-ending toe injury that requires surgery, a person familiar with the situation told The Associated Press on Tuesday, Oct. 12, 2021. The person spoke on condition of anonymity because the team had not provided an update on Ragnow's condition. (AP Photo/Tony Ding, File)

The winless, and banged-up Detroit Lions have taken another hit.

Lions standout center Frank Ragnow has a season-ending toe injury that requires surgery, a person familiar with the situation told The Associated Press on Tuesday. The person spoke on condition of anonymity because the team had not provided an update on Ragnow's condition.

Ragnow was hurt earlier this month at Chicago after he snapped the ball off quarterback Jared Goff, who was approaching the line to communicate with linemen, and into the hands of Bears defensive lineman Bilal Nichols.

Ragnow went on injured reserve last week and center Evan Brown made the first start of his three-year, four-team NFL career in Sunday's loss at Minnesota.

Ragnow's injury is one of many ailments that have taken some of the team's top players off the active roster.

The team placed receiver Quintez Cephus on the injured list Tuesday and added receiver Javon McKinley to the practice squad to replace tight end Jared Pinkney. Cephus, who broke his collarbone after making a catch against the Vikings, leads the team with 13.6 yards per catch and is its only wide receiver averaging 40 yards receiving per game.

Decker is eligible to return and coach Dan Campbell said the veteran will probably rejoin the starting offense at left tackle with rookie Penei Sewell shifting back to the right side.

In May, the Lions signed Ragnow to a $54 million, four-year extension that keeps him under contract for a total of $70 million through the 2026 season. He earned second-team All-Pro and Pro Bowl recognition last year.

Detroit drafted him No. 20 overall out of Arkansas in 2018. Ragnow has started all 49 games he’s appeared in over three seasons. He played with a fractured throat in a loss to Green Bay last December. He was inactive for the next two games and returned for the final game of the 2020 season.