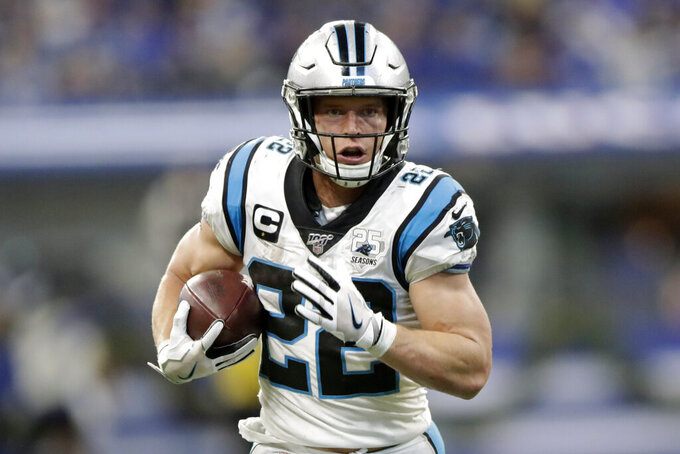 CHARLOTTE, N.C. (AP) — The Carolina Panthers have rewarded Christian McCaffrey for his production and versatility, making him the highest-paid running back in the NFL.

The team agreed to a four-year, $64 million contract extension with McCaffrey on Monday, a person familiar with the contract negotiations told The Associated Press.

The person spoke to the AP on condition of anonymity because the Panthers have not announced the extension. Details on how much of the contract is fully guaranteed were unavailable.

The $16-million-a-year deal eclipses Ezekiel Elliott's contract with the Dallas Cowboys that is worth $15 million per season.

The extension keeps McCaffrey, 23, tied to the Panthers through the 2025 season. The coming season would be the final year of his rookie contract, and Carolina had the option to pick up a fifth year in 2021.

It appeared to a matter of when, not if, the extension was coming after Panthers coach Matt Rhule made it clear last week that he viewed McCaffrey as a vital part of the franchise moving forward.

McCaffrey ran for 1,387 yards and posted 1,005 yards receiving last season for the Panthers, joining Marshall Faulk and Roger Craig as the only running backs in NFL history to reach 1,000 yards in both categories in the same season.

Panthers general manager Marty Hurney hinted last week that a contract extension was coming, saying the team was having “internal discussions." Hurney said then that “everyone knows what we think of Christian as a player.”

There has been some question about whether the team has overused McCaffrey the past couple of seasons, with him playing more than 90% of the team's snaps — by far the most in the league by a running back.

But Rhule expects that new offensive coordinator Joe Brady, who helped lead LSU to a national championship last year, will be an important part of the offense.

“I hired Joe because I know that he’s going to utilize guys to their strengths,” Rhule said last week.

Of McCaffrey, Rhule said: "He’s a tailback-slash-wideout, he can do it all, returner, too. So I’m anxious to get him out there and anxious to build this thing around him. I think he’s going to be a special player for us.”

With McCaffrey locked up, the Panthers are expected to turn their attention to defense in the NFL draft next week.