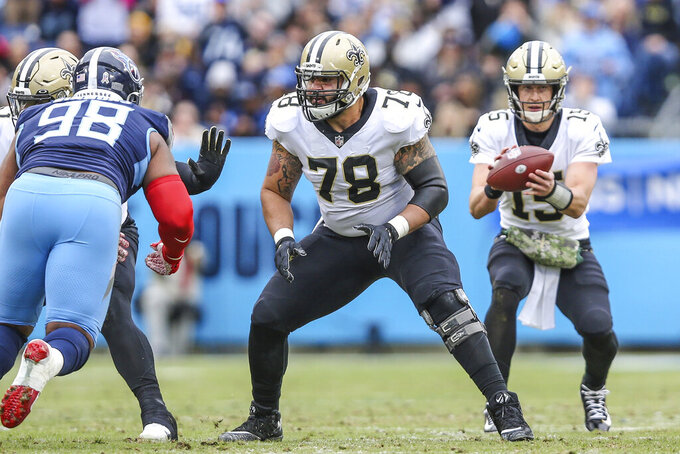 FILE - New Orleans Saints center Erik McCoy (78) sets to block during the team's NFL football game against the Tennessee Titans in Nashville, Tenn., Nov. 14, 2021. McCoy has agreed to a five-year contract extension reportedly worth about $63.8 million. McCoy’s representatives at APEX Sports Group announced the agreement in a social media post on Thursday, Sept. 8, 2022. The deal comes as McCoy enters the final season of his rookie contract. (AP Photo/Gary McCullough, File)

METAIRIE, La. (AP) — New Orleans Saints center Erik McCoy has agreed to a contract extension and a person familiar with the terms said it spans five years and is worth up to about $63.8 million.

McCoy's representatives at APEX Sports Group announced that McCoy had reached a “long-term” extension in a social media post on Thursday. A person familiar with contract terms provided them to The Associated Press on condition of anonymity because those have not been announced.

The person said $40.3 million of the deal is guaranteed.

The agreement comes as the 6-foot-4, 303-pound McCoy enters the final season of his rookie contract.

The Saints used their top 2019 draft choice on McCoy when they selected him in the second round out of Texas A&M and immediately made him a starter at center.

McCoy remained at that spot even after the Saints used a 2020 first-round draft choice to select former Michigan center Cesar Ruiz, who was converted to right guard.

The 25-year-old center started 16 games in each of his first two pro seasons and 12 games last season, when he was sidelined four games by an early season calf injury and one game because of a COVID-19 diagnosis.