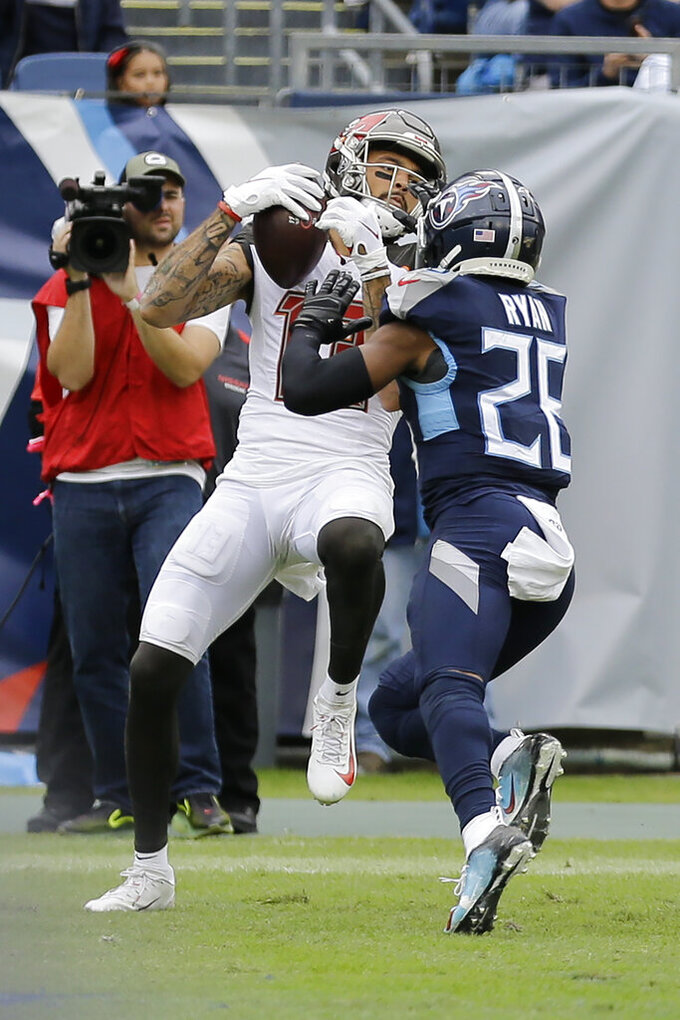 The Bucs (2-5) were denied a potential go-ahead touchdown in the closing minutes of Sunday's 27-23 loss at Tennessee, when Titans punter Brett Kern lost control of the ball as he was being tackled short of a first down on a fake field goal play and safety Andrew Adams scooped up what appeared to be a fumble and sprinted for the end zone.

Instead of regaining the lead, Tampa Bay took possession on downs at the Bucs 28 because Kern was ruled down by contact when the whistle blew.

Arians aired his displeasure about the whistle after the game but offered a much stronger rebuke on Monday.

"Again, not to beat a dead horse, but an inadvertent whistle. If we have those last three minutes and some change with a three-point lead and win the game, I think everybody is writing different stories and talking different things. So, it was more than just a play. Everybody except one guy saw the ball out and he blew a quick whistle," the 67-year-old coach said.

Arians also bemoaned another inadvertent whistle that he said cost his defense a fumble recovery during a loss at New Orleans on Oct. 6.

He also noted the Bucs, who've lost three straight, still had time to regain the lead after stopping the fake field goal play with 3:41 remaining.

"We get the ball — and we still should've taken the ball and scored a touchdown and won the game — but instead, we should've won the game already or had a chance to win it," Arians said.

The coach received words of support on social media from his wife, Christine, who tweeted: "NFL officiating needs fundamental fix. It does not need poorly trained part time officials who suffer no consequences for not doing their jobs. Instead we get new collective bargaining agreement. Shame on you Roger Goodell."

Arians said Monday he's not sure if the team's front seven, fortified by the return of linebacker Jason Pierre-Paul from a fractured neck suffered in an offseason car accident, can play much better. The Bucs lead the league in rushing defense.

"They're playing outstanding," the coach said. Linebacker Shaquil Barrett has a career-best 10 sacks through seven games, while Pierre-Paul made a splash with one in his season debut against the Titans.

A young secondary continues to make costly mistakes, prompting Arians to call them out as a unit after allowing three more touchdown passes vs. Tennessee.

"We did everything we can on the front end, on the front seven. Our back end was good at times and then we don't play the right technique a couple of times. Those were things that have been a problem, and we're going to get them corrected," Arians said.

Wide receiver Mike Evans rebounded from a subpar performance against Carolina in London to have 11 catches for 198 yards and two TDs against the Titans. His only regret is Jameis Winston couldn't find a way to get him the ball in the fourth quarter with the game on the line.

Winston. Although Arians noted it wasn't all his doing, the fifth-year quarterback had four more turnovers Sunday, hiking his total to 10 in the past two games. The Bucs had the ball three times after falling behind 27-23 with just under seven minutes to go.

Two of those drives ended with turnovers (sack fumble, interception) and the other stalled when Peyton Barber was stopped for a 1-yard loss on fourth-and-1 from the Tennessee 32.

Tight end O.J. Howard sat out against the Titans with a sore hamstring.

Zero. This is the 18th time the Bucs are 2-5 or worse through seven games. They've never rebounded from such a slow start to make the playoffs.

In addition to the quick whistle, Arians cited turnovers and poor red-zone offense and defense as factors in the team's third straight loss. To have a chance to end the skid at Seattle (6-2), they'll need to be better in all areas.