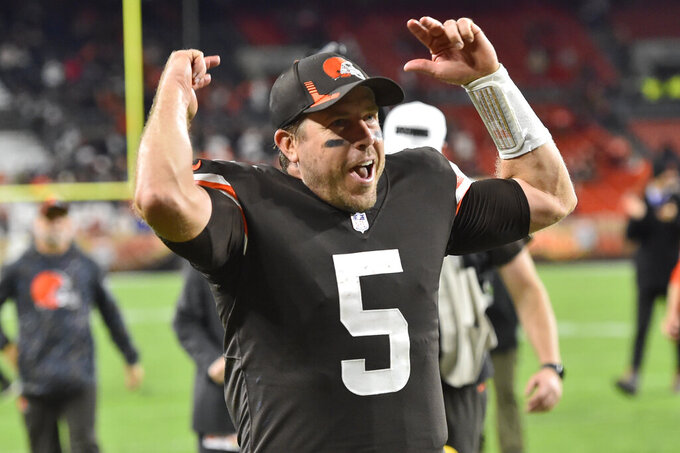 CLEVELAND (AP) — Baker Mayfield's season is on pause for the moment — and may be for a while. That doesn't mean the Browns have to slow down as well.

Mayfield missed Thursday night's game with a shoulder injury that worsened last week when he fractured a bone during a fall after being tripped by Arizona's J.J. Watt. He's hoping rest will reduce swelling so he can play on Oct. 31 against Pittsburgh, but right now nothing is certain with Mayfield.

But with Mayfield out, along with running backs Nick Chubb and Kareem Hunt, the Browns (4-3) got just what they needed from veteran quarterback Case Keenum and fisherman-turned-running back D'Ernest Johnson (146 yards) in a 17-14 win over the Denver Broncos.

Keenum didn't knock off all the rust in his first start since 2019 with Washington, but the 33-year-old showed he knows his way around the field while leading the Browns to a win they desperately needed to keep pace in the AFC North.

Keenum threw a touchdown pass late in the third quarter after making a key conversion with a scramble on fourth down. And most importantly, he didn't have any turnovers.

“Case played well,” said Stefanski, who spent 2017 with Keenum in Minnesota and was instrumental in the Browns signing him as a free agent. “He made good decisions. He spread the ball around. He took care of the football.”

Stefanski wanted Keenum to “spread the rock around,” and he connected with 10 different receivers.

He doesn't have Mayfield's big arm, and Keenum won't evade defenders with spins or his speed. But he managed the game effectively while giving Stefanski and his teammates even more confidence he can do it again.

The Browns signed Keenum to a three-year, $18 million contract before last season for just this kind of performance. They needed protection in the event Mayfield got hurt or struggled as well as someone to help develop the young QB.

“Case has been there before,” said wide receiver Jarvis Landry, who gave the Browns an emotional lift after missing four games with a knee injury. “He’s a guy that has been to the NFC Championship game. He’s been there.

"So the way that he’s prepared throughout this whole entire time for the past two years has been something that you don’t blink when he gets in there. You know that he still has the ability to lead us to a win.”

Unsung but not unappreciated, Cleveland's offensive line kept the league's best running game humming. The Browns rolled up 182 yards rushing as the line, which was missing starting right tackle Jack Conklin, created just enough room for the shifty Johnson to pick his way through tacklers.

Another backup, Blake Hance, who played left tackle the past two weeks, shifted to the right side, and one of the league's top units didn't miss a beat.

Cleveland's defense stepped up after giving up 84 points the past two weeks, but still had some issues and isn't forcing enough turnovers.

After limiting the Broncos to just 76 yards in the first half, the Browns gave up two long touchdown drives in the second half when they couldn't get to quarterback Teddy Bridgewater and missed tackles.

Johnson has a fish story, and it's about him. After he wasn't drafted in 2018, Johnson briefly worked on a fishing boat in Key West, Florida, while dreaming of a shot in the NFL.

In his first career start, Johnson opened the scoring with a 4-yard TD and then polished off the Broncos in the final minutes by picking up 52 yards on Cleveland's game-sealing drive.

Cornerback Denzel Ward can't seem to stay healthy. He limped off in the fourth quarter with a left hamstring injury after making a tackle. Ward has missed four games in each of the past two seasons with injuries.

Stefanski is “hopeful” Chubb (calf) and Conklin (knee) will play against the Steelers after both sat out the past two weeks. ... WR Odell Beckham Jr. is playing with a sprained shoulder and Stefanski said the star “fought very, very hard to make it to that game." ... There was no update on WR Donovan Peoples-Jones, who injured his groin in pregame warmups and didn't play.

52 — Myles Garrett's career sacks in 58 games. The star defensive end got 1 1/2 sacks against the Broncos, who were doing some extra clutching and grabbing to keep him off Bridgewater.

"If you go by the book, it's holding. The refs are kind of giving me the Shaq treatment right now so hopefully, I can get around that,” Garrett said, referring to former NBA superstar Shaquille O'Neal, who was so dominant it made officiating difficult.

Trick or treat? The Browns get a mini-bye to heal up before hosting the Steelers on Oct. 31. The Halloween matchup is Cleveland's first inside a division that's even deeper this season with Cincinnati's resurgence.