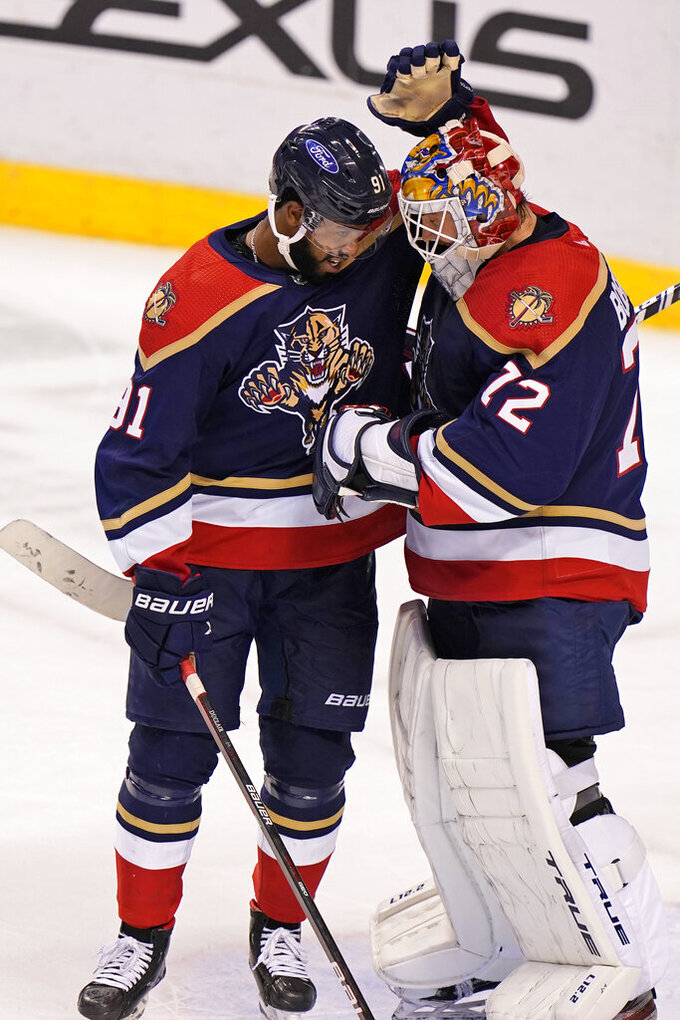 SUNRISE, Fla. (AP) — Aleksander Barkov had two goals and an assist, and the Florida Panthers beat the Chicago Blackhawks 4-2 on Saturday night.

Carter Verhaeghe added a goal and an assist as the Panthers earned their third straight win. Frank Vatrano also scored, and Anthony Duclair had two assists in his first game since Feb. 27.

Brandon Hagel and Adam Boqvist scored for the Blackhawks, which lost to the Panthers for the third time this season. Kevin Lankinen had 31 saves.

Florida grabbed control with three goals in a scoring burst in the second period.

Barkov tied it at 1 when he beat Lankinen at 7:46. Verhaeghe put the Panthers ahead to stay 11 minutes in the period, and Valtrano made it 3-1 at 12:29. It was the 10th goal of the season for each of the scorers during the decisive sequence.

Duclair, who missed six games with a lower-body injury, was thrilled to be back on the top line with Barkov.

“He’s one of the best centermen in the league; probably one of the best two-way forwards I’ve ever played with,” said Duclair, who has 10 assists on the season. “We found some chemistry early on in the season and it keeps going now.”

Barkov scored again midway through the third. The captain has 11 points over his last nine games.

Hagel scored into an open net with Bobrovsky out of position just 28 seconds into the second off a return pass from Dominik Kubalik during a 2-on-1 break. It was Hagel’s second goal.

“We have to regroup, focus up, get back to the drawing board and be ready in a couple of days,” Hagel said of the Blackhawks’ third loss in the last four games. “We can’t really dread on this.”

After being outplayed in the early going, Chicago got on track midway through the first with significant zone time and nine shots over the last 10 minutes of that period.

Florida coach Joel Quenneville couldn’t have been more pleased with the effort of his top line.

“They all played a part in all the goals that they scored,” Quenneville said. “Nice to see they get reunited and have a big night. I thought (Duclair’s) speed was very dangerous.”

Sergei Bobrovsky made 30 stops for the Panthers.

Chicago outshot Florida during a solid first period and then early on in the second period before Florida took charge.

“A couple of their big, important players really started to make a difference around the puck,” Chicago coach Jeremy Colliton said. “We got beat off the wall a couple of times and when that happens you’re going to pay a price.”

Hall of Fame defenseman Ray Bourque, whose career spanned 22 seasons and 1,612 games, was among those congratulating Keith Yandle on recently playing in his 1,000th game during a pregame video tribute.

Yandle achieved the milestone on March 7 against the Carolina Hurricanes, where he was also recognized on the scoreboard. During pregame warmups, all the Panthers wore jerseys with Yandle’s name and 1000 on the back.

The Boston native was presented with a 1,000-game Silver Stick by Barkov to conclude the festivities. One surprise gift from the organization was a custom-made golf cart.

The game was witnessed by 4,721 fans, including Miami Dolphins coach Brian Flores and his family.

Florida wraps up its two-game series with Chicago on Monday night.