Bears could be without 3 coordinators when they host Vikings 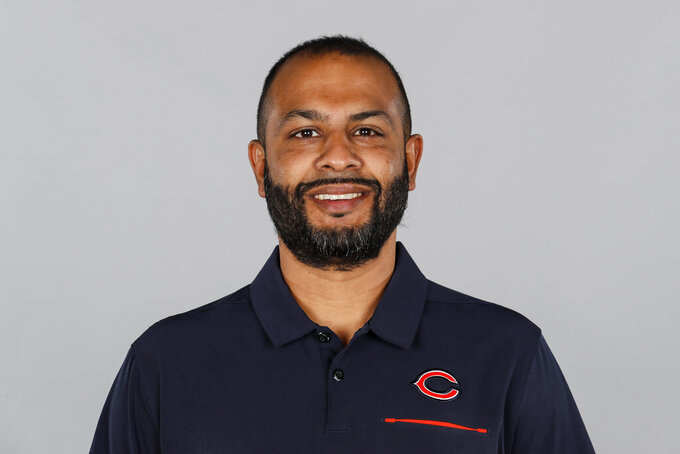 This is a 2021 photo of Sean Desai of the Chicago Bears NFL football team. This image reflects the Chicago Bears active roster as of Friday, April 16, 2021 when this image was taken. The Chicago Bears could be without all three of their coordinators, including Desai, when they host the Minnesota Vikings on Monday, Dec. 20, 2021. (AP Photo)

CHICAGO (AP) — The Chicago Bears' health woes haven't been limited to the players. Three of the team's coordinators have been stricken, too.

Bill Lazor felt as if he had a bad head cold. Under normal circumstances, the Bears' offensive coordinator would simply take some medicine and go about his job. But after testing positive for COVID-19 this week, he is working remotely.

The Bears could be without all three when they host the Minnesota Vikings on Monday night.

“I’ve felt better, felt worse,” said Lazor, who has been vaccinated and received a booster. “I feel like I have a bad head cold and a bad cough. ... I’ve obviously been a lot sicker, so hopefully this passes and I know the NFL is coming out with new rules about return. So hopefully things clear up here fast.”

Tabor and Desai have also experienced some symptoms. Both appeared to be in better shape and were hopeful they would be cleared to rejoin the team in time for the game.

Tabor said he thought he had a slight chest cold when he tested positive on Monday. He said Friday he was “feeling great.”

“Just kind of isolate and quarantine myself, keep my family safe and keep those around me safe,” he said.

The Bears, like other teams around the league and in the NBA and NHL, have been hit hard during the recent virus surge.

The NFL updated its protocols this week, requiring masks regardless of vaccination status and remote or outdoor meetings as part of the changes. The league also moved three games because of outbreaks, shifting Las Vegas at Cleveland from Saturday to Monday, and Seattle at the Los Angeles Rams and Washington at Philadelphia from Sunday to Tuesday.

The Bears had 13 players on the reserve/COVID-19 list as of Friday afternoon after backup quarterback Andy Dalton and cornerback Duke Shelley were added, and offensive lineman Elijah Wilkinson was activated. Receiver Allen Robinson, nose tackle Eddie Goldman and cornerback Artie Burns were among those still out.

The Bears also had several more players dealing with non-COVID illnesses, including tight end Cole Kmet. The second-year pro said he was feeling “a lot better” after dealing with cold symptoms. He was relieved to test negative for COVID-19.

The recent outbreak is another twist in a rough season for the Bears (4-9). They've lost seven of the past eight games and have had difficulties in all areas.

Injuries have exposed a lack of depth throughout the roster. There are questions about the futures of coach Matt Nagy and general manager Ryan Pace. And when they meet Minnesota, they could be missing all three coordinators.

It wouldn't be the first time they've been without a prominent part of the coaching staff. Nagy missed the loss to San Francisco on Halloween because of COVID, and Tabor ran the team in his place.

If Tabor is unavailable on Monday, special teams assistant Brian Ginn would fill in for him. If Desai can't be at Soldier Field, Mike Pettine might call the defense. The longtime NFL defensive coordinator and former Cleveland Browns coach is in his first season as a senior defensive assistant with the Bears.

Tabor and Lazor seemed to have cases of cabin fever being away from the team. So did Desai, to a lesser extent.

“Quite frankly, especially the front end of the week — Mondays and Tuesdays — it’s the same," he said. "I’m just stuck in my office, game planning and watching tape all day anyway, so the majority of it is the same. It’s just the practice part that you miss being out on the field.”

It's not totally new territory for the Bears. They conducted meetings via Zoom last year. But Lazor said being away from the facility altogether is difficult.

“Some of the work is a lot easier to do when you’re in the building together,” Lazor said. "So it’s a little bit frustrating in the organization of practice and getting cards ready and the scout team ready. And if an adjustment gets made, to test it out so that everyone gets it on the staff. You can go down the hallway and do it a lot easier than you can when you’re not in the building. I’d say it’s frustrating, but there’s not much I can do about it.”