Bears have plenty to fix as disappointing season winds down 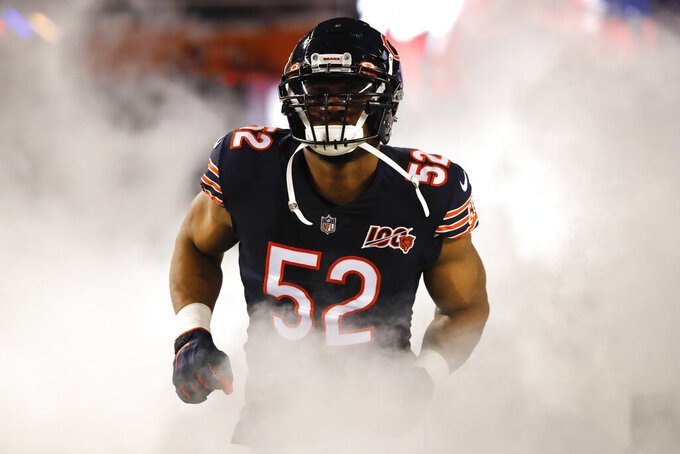 “I don't think that anybody is wrong saying that,” Nagy said Monday, a day after a 26-3 prime-time loss to Patrick Mahomes and the AFC West champion Kansas City Chiefs. “The frustration part for me is I know we're a disciplined team, but when you have some of the things that happened yesterday in the game it's very easy to say that we're undisciplined. And that's the part that when I talk about reflection moving forward here, and when I step back and look at everything big-picture wise, that's my job. I need to make sure that that part gets fixed.”

The Bears (7-8) have plenty to fix, particularly on an offense that ranks near the bottom of the NFL. A top-10 defense has shown more vulnerability than it did a year ago, when Chicago won the NFC North at 12-4.

And too often, simple breakdowns have haunted the Bears.

On Sunday, Mitchell Trubisky overthrew Allen Robinson on what could have been a 46-yard touchdown with Kansas City leading 10-0 in the second quarter.

Kevin Pierre-Louis got flagged for running into the punter. That kept a drive going that ended with a touchdown near the end of the first half.

And with a first-and-goal in the third quarter, the Bears came away empty-handed when Trubisky's fourth-down pass to Robinson in the left side of the end zone got broken up by Charvarius Ward.

Now, instead of gearing up for a playoff run, the Bears hope to avoid finishing with a losing record for the fifth time in six years when they close the season at Minnesota.

There wasn't much that worked against the Chiefs. And the result was their most lopsided loss in Nagy's two seasons.

The Bears obviously need to fix an offense that ranks near the bottom of the NFL. That starts with getting more out of Trubisky after an inconsistent third season. But the problems extend to the line, run game, tight end spot and a lack of playmakers other than Robinson.

Kicker Eddy Piñeiro. He appears to be finishing an inconsistent year on a stronger note after enduring a midseason slump. He is 7 for 7 on field goals the past five games, including a 46-yarder against the Chiefs, after missing 4 of 7 the previous four weeks. Piñeiro made 9 of 10 in the first six games.

“I like what he has done all year long," Nagy said. "I think moving forward here, going into it, I think we know who he is and what we have.”

Outside linebacker Leonard Floyd. He was basically a nonfactor against Kansas City, and with just three sacks this season, the Bears have a decision to make.

Though they picked up their fifth-year option for next season, they will have to decide if they want to stick with him. Floyd hasn't necessarily played poorly since the Bears drafted him with the No. 9 pick in 2016. The question is whether he has played well enough, particularly with Mack consistently drawing double teams.

3 — The Bears' point total, matching a season low they set in the opener against Green Bay at Soldier Field.

The Bears will try to sweep the playoff-bound Vikings after beating them 16-6 at Soldier Field on Sept. 29. Trubisky got knocked out of that game with a shoulder injury on the opening possession and Chase Daniel replaced him.