Bears look to bounce back against Smith, winless Texans 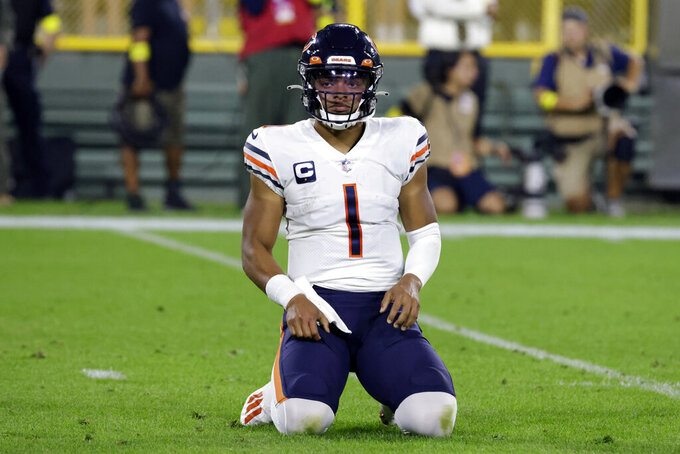 LAKE FOREST, Ill. (AP) — The Chicago Bears were riding high after a surprising victory over San Francisco in a rain-soaked season opener at Soldier Field, only to get taken down by Aaron Rodgers and the rival Green Bay Packers yet again.

They will try to bounce back when Lovie Smith — their former coach — and the winless Houston Texans visit Sunday.

Both teams have experienced their share of frustration. The Bears (1-1) have some big issues in their passing game, and the Texans (0-1-1) are simply searching for ways to win after failing to finish the first two weeks.

Houston settled for a 20-20 tie in the opener against Indianapolis after blowing a 17-point lead in the fourth quarter. The Texans also led entering the fourth last week against Denver, only to lose 16-9.

As frustrating as those two games have been, the Texans see encouraging signs coming off a 4-13 season.

“Absolutely,” receiver Brandin Cooks said. "Like I said, I think early on we do a great job of moving the ball and having those details correctly, so I’m definitely encouraging that aspect. It’s time to kind of take that next step to be able to turn these L’s into W’s really.”

The Bears got their run game going in a 27-10 loss at Green Bay. But when it comes to passing, they're not getting much.

Justin Fields, in his second season, is 15 of 28 for 191 yards. He has the fewest attempts in the NFL among qualifiers. Only Dallas' Dak Prescott has fewer completions and yards, and he missed last week's game following thumb surgery.

Though Fields would obviously like to open up the passing game more, he said his job is to execute the game plan.

“If our offensive coordinator thinks the plays he’s giving me are going to help us win games, that’s all I care about," he said.

Smith had nothing but good things to say about his time in Chicago.

“Absolutely. I get a chance to have my dream job here based on starting there,” he said. "A lot of great times, we still have a home there, friends. My wife is from Chicago. All positive, appreciative of everything that happened there during my time there.”

The Bears have just one winning record and two playoff appearances since they let him go. They're also on their fourth coach since, with Matt Eberflus in his first season.

“It’s Week 2, so don’t need to worry about it too much,” he said. “The team believes in me. Players believe in me, so whenever my opportunity will be there, I’ll take advantage of it.”

Mooney has just two receptions for 4 yards and has been targeted five times. It's not what he or the Bears envisioned after he had 1,055 yards last season — his second.

Though the Texans have had trouble finishing, one player who hasn’t had a problem doing so is rookie running back Dameon Pierce. Both Smith and Cooks raved this week about the fourth-round pick’s ability to finish.

“We as a football team need to finish. I haven’t said that an awful lot to Dameon,” Smith said. “He finishes plays ... that toughness, extra effort, all those things you talk about, that’s exactly what we see from him every time he gets the ball.”

Added Cooks: “From the moment he stepped into the building, that’s what he’s all about. Even in practice finishing runs, even when he’s not touched, even when it’s hard out there. It’s a mindset.”

Pierce had 15 carries for 69 yards and was solid in pass protection a week after managing just 33 yards on 11 carries in his NFL debut. His yards rushing last week were the most by a Houston rookie since 2017.

The Bears ran for 180 yards and averaged 6.7 yards per attempt against Green Bay. David Montgomery played a big part in that with 122 yards on 15 rushes, after managing just 26 yards on 17 carries in a rain-soaked season-opening win against San Francisco. Khalil Herbert added 38 yards on four attempts.

The Texans are without center Justin Britt after he was placed on the reserve/non-football injury list this week. Britt started 11 games last season in his first year in Houston and started in the opener before leaving the team for what Smith called personal reasons.

Smith wouldn’t provide any details on why Britt was out this week. Scott Quessenberry, who started against the Broncos, will fill in at center.