Bengals' 2 big plays in 22 seconds not enough against Rams 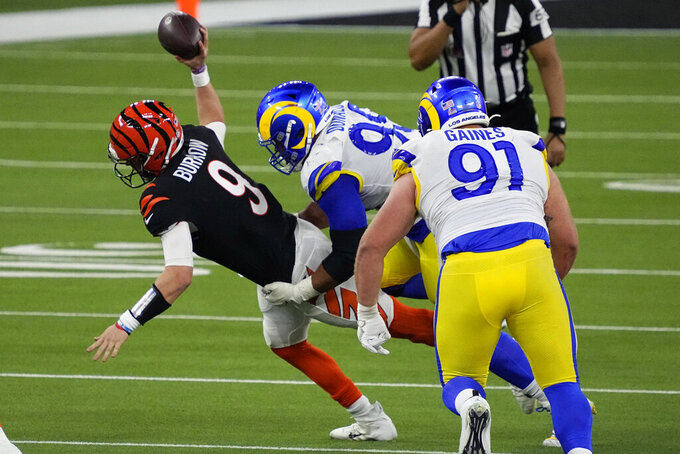 INGLEWOOD, Calif. (AP) — The Cincinnati Bengals got their two biggest plays before everybody got back into their seats after the Super Bowl 56 halftime show.

Joe Burrow found Tee Higgins for a 75-yard touchdown on the Bengals' first play of the third quarter.

All in the span of 22 seconds.

Then little else Sunday, and now the Bengals go back to Cincinnati from their first Super Bowl since the 1988 season still looking for their first championship after a 23-20 loss to Los Angeles.

“It hurts,” Burrow said. “We put a lot of work into going out there and executing and performing well, and it didn't turn out the way we wanted so it's disappointing.”

Burrow had his biggest play and lone touchdown pass on that first offensive play of the third. He moved to his right and then a few steps upfield before throwing deep to Higgins. The receiver grabbed Rams cornerback Jalen Ramsey's face mask and pushed off for enough room to make the catch.

Ten seconds later, Awuzie grabbed the ball that bounced off Skowroneck. But the Bengals had to settle for a second field goal.

After that, Burrow had plenty of chances along with Offensive Rookie of the Year Ja'Marr Chase to pad what was a 20-13 lead. But the Bengals punted four times with two three-and-outs, and Cincinnati gave up five sacks in the third quarter alone.

“Collectively, we shot ourselves in the foot,” Bengals tight end C.J. Uzomah said. “We just didn't execute as well as we should've.”

Cincinnati's best chance to keep building fizzled after Awuzie's interception. The Bengals started at the Rams 31 yet Aaron Donald sacked Burrow twice on the drive, the second on third-and-3 at the 11. That forced the Bengals to settle for the field goal.

Awuzie still thinks the Bengals had the momentum all the way until the Rams' final drive.

“It's one of those things where you can have momentum, but if you don't put your foot on their throat some things aren't going to go your way,” Awuzie said.

Even then, the Bengals had 1:25 left and two timeouts remaining with a chance to at least force overtime with McPherson, who tied Adam Vinatieri's NFL postseason record with his 14th field goal in these playoffs. Burrow got the Bengals to midfield with a 17-yard pass to Chase, then a 9-yarder to Tyler Boyd.

“I thought we were going to go down and at least get a field goal to tie the game and send it into overtime,” Burrow said.

Then Burrow, the quarterback who came in 7-0 in playoff games in college and the NFL combined, threw the ball away trying to find Chase deep on second-and-1. A run by Samaje Perine got nothing, then Burrow tried to escape Donald with a pass to Perine that fell harmlessly to the turf at SoFi stadium to start the Rams' celebration.

Burrow said he was trying to do anything to complete the pass. The quarterback used to smoking a cigar after title games was disappointed in his own performance overall.

“I thought I could've played better, give us a better chance to win,” Burrow said. "But I mean you live and you learn.”