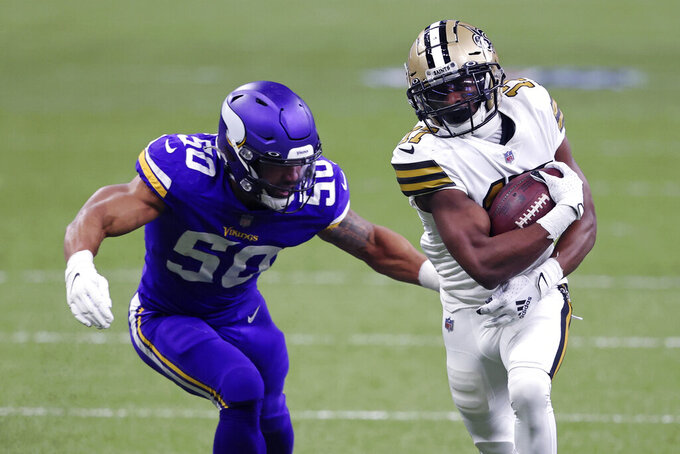 BUFFALO, N.Y. (AP) — The Buffalo Bills reached an agreement to sign free agent receiver Emmanuel Sanders in a move on Wednesday that restores experienced depth to their potent passing attack.

The agreement is pending Sanders passing a physical, and was announced shortly after the NFL's signing period opened.

Sanders, who turned 34 on Wednesday, is an 11-year veteran preparing to join his fourth team in three years after spending last season in New Orleans. He’s an established possession receiver, and will be given the chance to replace John Brown, who was cut last week to free up salary cap space.

Sanders went on social media to hint at his pending arrival in Buffalo on Tuesday. He used three muscle-flexing emojis in retweeting a post noting he and Beasley were college teammates at SMU. And he wrote, “Bills mafia... let’s goooooooo!” in retweeting a report he had agreed to sign with Buffalo.

Sanders had 61 catches for 726 yards and five touchdowns in his one season with the Saints last year.

After spending his first four NFL seasons in Pittsburgh, Sanders signed with Denver in 2014, where he enjoyed his best production. Sanders topped 75 catches and 1,000 yards receiving in each of his first three seasons in Denver, and was a member of the Broncos’ Super Bowl championship team in the 2015 season.

Buffalo reached an agreement to re-sign cornerback Levi Wallace to a one-year contract after the team didn't tender the restricted free agent an offer before the signing period opened. He had two interceptions in 12 games last season, including a game-sealing fourth-quarter pick of Ben Roethlisberger in a 26-15 win over Pittsburgh on Dec. 13.

Overall, he has four interceptions in 35 starts filling the starting role opposite Tre'Davious White over three seasons in Buffalo.

The Bills also freed up about $2.5 million in much-needed cap space by trading veteran tight end Lee Smith to the Atlanta Falcons for a seventh-round pick in the 2022 draft.

Buffalo’s limited room under the cap led to the team not tendering an offer to punter Corey Bojorquez, who is now eligible to hit the market. The Bills already filled Bojorquez’s spot by agreeing to sign former Dolphins punter Matt Haack to a three-year contract on Tuesday.