Bills cut Haack, clear the way for 'Punt God' to take over 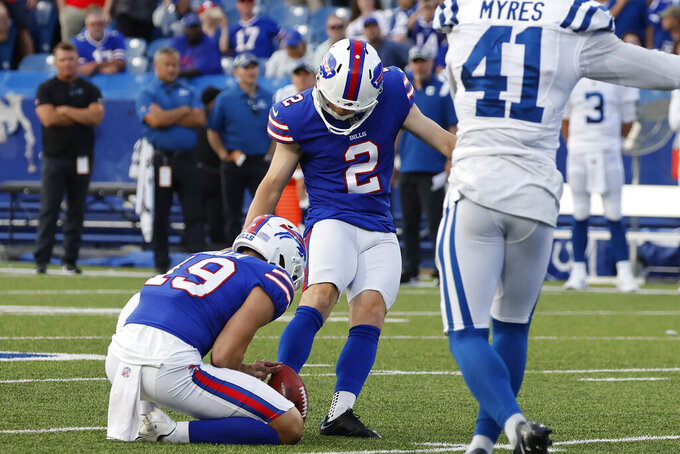 ORCHARD PARK, N.Y. (AP) — “Punt God” nickname aside, Bills rookie Matt Araiza understands he’s got plenty to still improve upon even after Buffalo cleared the way for the punter to make the season-opening roster.

“I wouldn’t call it a relief, because you have to go out and earn your job every week,” Araiza said on Monday. “It’s a step in the right direction, and I’m grateful for it, for sure.”

Araiza’s spot on the roster is all but assured after the Bills released returning veteran Matt Haack in a series of roster cuts upon returning to practice following a 42-15 preseason win over Denver on Saturday.

Buffalo also cut veteran receiver Tavon Austin, who has failed to meet expectations since being selected by the Rams in the first round of the 2013 draft. The Bills also acquired a fifth-round pick in next year’s draft in a trade that sent fourth-year offensive lineman Cody Ford to the Arizona Cardinals.

The decision to cut Haack was the most notable move in settling a position that was up for grabs since Buffalo used a sixth-round pick to draft the 21-year-old Araiza with the booming left leg out of San Diego State.

The move came after Araiza attempted just one punt in two preseason games. His punt was impressive enough: a flip-the-field 82-yarder that dribbled into the end zone during a 27-24 win over Indianapolis in Buffalo’s preseason opener on Aug. 13.

“Just felt like it was time to move on with one punter in camp,” coach Sean McDermott said, noting it offered Haack an opportunity to catch on with another team before the regular season opens.

“What we’ve seen to this point with Matt Araiza, he’s off to a good start,” McDermott added. “It doesn’t mean he’s where he needs to be. He’s not arrived. And speaking with Matt this morning, he echoed those sentiments in terms of he’s earned nothing.”

Though the strength of Araiza’s leg was not in question, a bigger issue for the Bills was to see how the player adjusted to place-holding duties for kicker Tyler Bass. Araiza was new to holding after he handled both the punting and placekicking jobs in college.

Araiza proved to be a fast learner, handling most of the duties in two preseason games, including being the holder as Bass hit a game-winning 46-yard field goal against the Colts as time expired.

“I’ve gotten a lot better,” Araiza said, referring to holding. “The hold takes placed so fast, you don’t really have time to think about it too much. And I’m doing a lot of things naturally by instinct now that I used to not be able to.”

Haack was entering his second season in Buffalo and had two years remaining on his contract. The fifth-year player was inconsistent last season while struggling in Buffalo’s windy elements, averaging a career-low 42.9 yards per attempt and landing just 18 of 52 punts inside an opponent's 20.

The 21-year-old Araiza hasn’t had to deal with cold weather much during his three years at San Diego State, where the Ray Guy award winner established himself as one of college football’s premier punters.

Fourth downs turned into must-watch moments, with Araiza setting the major college football record with a punting average of 51.19 yards.

Austin was the odd man out among a very deep group of receivers, led by Stefon Diggs, Gabe Davis and Isaiah McKenzie. Austin did not play in Buffalo’s preseason opener against the Colts, and he finished with just two catches for 18 yards against Denver on Saturday.

The 32-year-old signed with Buffalo in June after spending last season in Jacksonville, where he had 24 catches for 213 yards and a touchdown. The Jaguars were his fourth team in four years, with the other stops being Green Bay, San Francisco and Dallas.

Ford was expendable after the Bills retooled their offensive line this offseason, and with Ryan Bates projected to take over at right guard, where Ford started seven games last year. A second-round pick out of Oklahoma in 2019, Ford struggled to find his niche with the team over the past two seasons after starting 15 games at right tackle during his rookie year.

NOTES: McDermott said starting S Jordan Poyer is improving but not yet cleared for practice. Poyer has been out since hyperextending his left elbow in practice on Aug. 2. ... TE Dawson Knox is expected to rejoin the team for practice Tuesday after being with his family following the death of his younger brother, Florida International defensive end Luke Knox, last week.