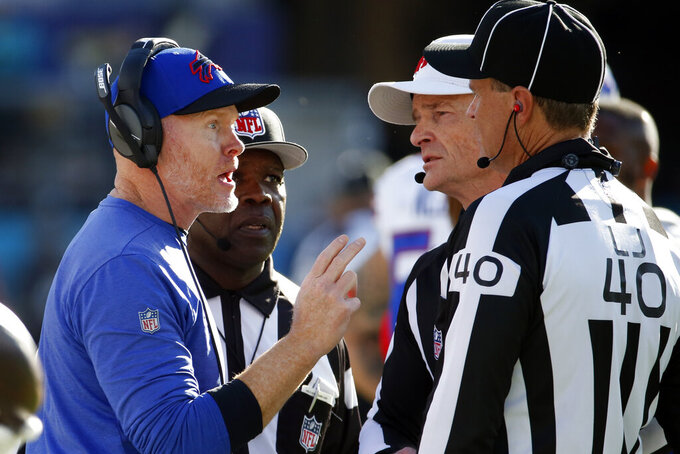 JACKSONVILLE, Fla. (AP) — The Buffalo Bills had 12 penalties, including five personal fouls, and three turnovers – and still had chances to win.

Buffalo nonetheless delivered a stinker at Jacksonville on Sunday, a 9-6 shocker that should help refocus a team that had been the odds-on favorite to win the Super Bowl.

This outcome for the Bills (5-3) was humiliating, humbling and hopefully a wake-up call.

“You can’t beat yourself. Let’s start there,” coach Sean McDermott said. “Whether it’s penalties, turnovers, fundamentals. Yeah, way too (many) penalties, self-inflicted. Got to keep our poise."

Buffalo’s main concern was on the offensive side, where it gave up four sacks and even more hurries. Quarterback Josh Allen was harassed early and often. He completed 31 of 47 passes for 264 yards, with two interceptions and a fumble.

Allen hadn’t committed a second-half turnover all season until Sunday. Then he coughed up three against the Jaguars (2-6) and would have had a fourth if officials hadn’t ruled his forward progress had been stopped.

“Played like (crap), excuse my language, but that starts with me,” Allen said. “I’ve got to be better for this team. But, again, those guys on defense get paid, too. They had a good game plan.”

Allen also led the way on the ground, another issue for Buffalo against one of the league’s worst defenses. He scrambled five times for 50 yards. Devin Singletary and Zack Moss combined to run nine times for 22 yards. Moss left the game late with a concussion.

“That’s a huge issue right now for us,” McDermott said. “Got to be able to run the football when it’s handed off. … That’s not good enough.”

With no running game to worry about, the Jaguars could focus on getting to Allen. And they did that routinely down the stretch.

The game’s most decisive moments came on Buffalo’s final two drives: Allen fumbled on a third-and-2 play at the Jaguars 37 with a little more than 5 minutes remaining. Allen fumbled after getting pressured by Dawuane Smoot. Jacksonville’s linebacker Josh Allen – the league’s other Josh Allen – recovered.

Buffalo got the ball back in the waning minutes and advanced to the Jaguars 39. But Smoot sacked Allen on third down. It was Jacksonville’s fourth sack of the day.

Allen’s sack made NFL history. It was the first time a player sacked a quarterback with the same name since the league started counting sacks in 1982.

McDermott was peppered with questions about slow starts, silly penalties and potential changes along the offensive line. He also defended declining an offensive holding call against Jacksonville after a third-and-5 play from the Buffalo 37.

Matt Wright made a 55-yard field goal on the next play. McDermott could have accepted the penalty, which would have taken the Jaguars out of field-goal range.

“We weren’t playing great at that point,” he said. “And felt like he hadn’t had a lot of field goals. I’m not sure if he had any at that distance at this point in the season. But that’s one I want back, yeah, obviously with the result the way it was.”

The entire game will be one Buffalo might look back on the rest of the season. The Bills were 14 1/2-point favorites, according to FanDuel Sportsbook, and they looked unprepared — and maybe even unmotivated — from the start.

“I was just looking on their sideline and one thing I know is I was like, ‘They don’t have the same energy as us,’” Jaguars cornerback Shaquill Griffin said. “If you feel like one team deserved this win, it’s us, but you’ve got to believe that.

“That’s one thing I kept preaching at everybody else. Look on the sidelines, watching them walking around, it’s like they don’t care. They don’t deserve this. Let’s show them why.”

Added Buffalo's Allen: “It’s hard to win football games no matter who you play. We’re all grown men. We all get paid to play this game. They came out. They wanted it more.”