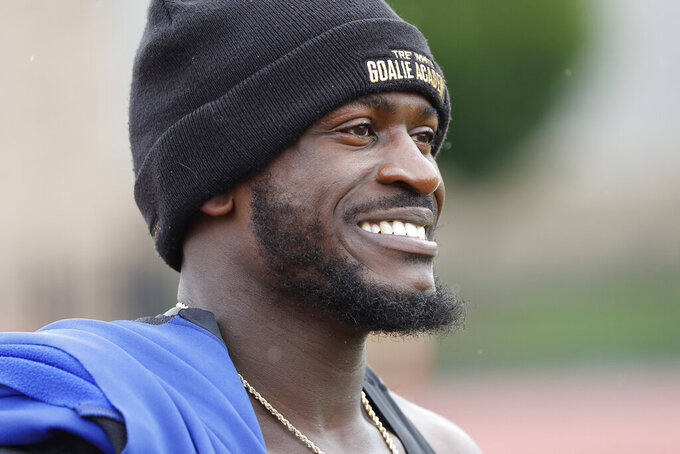 FILE - Buffalo Bills cornerback Tre'Davious White looks on during practice at the NFL football team's training camp in Pittsford, N.Y., Sunday, July 24, 2022. White was cleared to return to practice on Wednesday, Oct. 12, 2022, for the first time since blowing out his left knee 11 months ago. (AP Photo/ Jeffrey T. Barnes, File)

ORCHARD PARK, N.Y. (AP) — Bills cornerback Tre’Davious White was cleared to practice on Wednesday for the first time since injuring his left knee 11 months ago in opening a three-week window for the starter’s long-awaited return.

In announcing White’s return to practice, coach Sean McDermott already ruled out the sixth-year player from Buffalo's game at the Kansas Chiefs on Sunday in a showdown of two 4-1 teams.

White opened the season on the physically unable to perform list. Under NFL rules, the Bills have three weeks to activate White to their roster, or place him on season-ending IR.

The timing of White’s return comes with Buffalo entering its bye week following the game at Kansas City. The Bills then play Green Bay on Oct. 30.

McDermott stressed the team will ease White back into practice by saying, “let’s crawl before we walk.”

White was hurt during a 31-6 win at New Orleans on Nov. 25, and had surgery for a torn ACL a few weeks later.

White still walked with a slight limp while spending training camp working out individually on the sideline.

He’s has been a starter since the Bills selected him in the first round of the 2017 draft, and was selected to the All-Pro team in 2019.

The Bills secondary has been depleted by injury to start this season. Starting safety Jordan Poyer has missed two of five games with foot and rib injuries. Fellow starting safety Micah Hyde was placed on season-ending IR three weeks ago, and recently had surgery for a herniated disk.

Buffalo opened the season with two new starters at cornerback after losing Levi Wallace to free agency. Dane Jackson, who closed last season filling in for White, started on one side. The Bills went with the rookie combination of Christian Benford and Kaiir Elam to fill the other starting spot before Benford missed the past two games with a broken hand.