Both coming off tough losses, Browns and Bengals clash 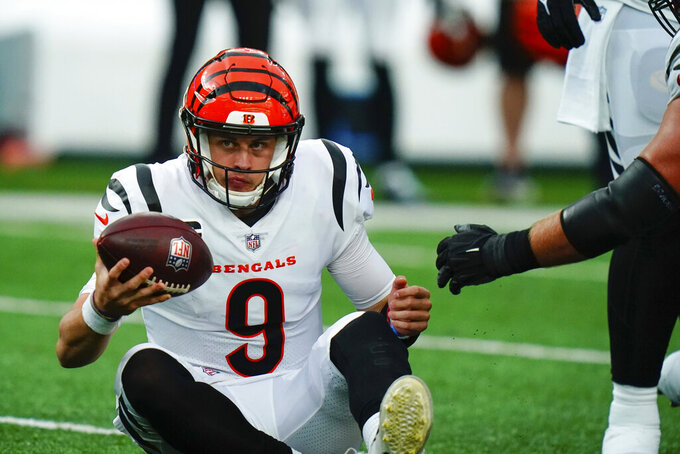 Cincinnati Bengals quarterback Joe Burrow reacts as he sits on the ground during the second half of an NFL football game against the New York Jets, Sunday, Oct. 31, 2021, in East Rutherford, N.J. (AP Photo/Frank Franklin II)

OPENING LINE: Bengals by 2 1/2, according to FanDuel SportsBook.

TURNOVER DIFFERENTIAL: Browns minus-3; Bengals minus-1.

BROWNS PLAYER TO WATCH: Blake Hance moves in at right tackle, replacing All-Pro Jack Conklin, who is out indefinitely after dislocating his left elbow. Hance has performed well while filling in over the past two seasons, but he’s more comfortable inside and not protecting one of quarterback Baker Mayfield’s flanks.

BENGALS PLAYER TO WATCH: Quarterback Joe Burrow is fifth in the NFL in passing with 2,269 and his 20 touchdowns rank third in the league. In last week's losing effort, he still threw for 259 yards and three touchdowns. But his nine Interceptions are tied for second in the league. Burrow, a second-year QB, enters Sunday 97 passing yards shy of 5,000 for his career.

STATS AND STUFF: Drama encircled the Browns this week after WR Odell Beckham Jr. essentially tried to force a trade. His father shared a social media video highlighting plays when Mayfield didn’t throw the ball to the three-time Pro Bowler. … Mayfield returned last week after missing one game with a shoulder injury and completed 20 of 31 passes for 225 yards. However, he was hurt by several drops, including two by the sure-handed Landry, who also had a costly fumble in the fourth quarter. … Mayfield is 5-1 in his career against Cincinnati with 17 touchdowns and a 111.4 rating. … Cleveland leads the league in rushing, but managed just 96 yards last week. … RB Nick Chubb returned last week after missing two games with a calf injury and had just 61 yards. He had 124 yards and two TDs in the first matchup with Cincinnati last season and has averaged 94 yards in five games against the Bengals. ... Browns DE Myles Garrett leads the NFL with 10 1/2 sacks. He had two sacks in the last meeting between the teams. ... Cincinnati has played more games against Cleveland (95) than any opponent except Pittsburgh (102). ... Before losing to the previously 1-5 New York Jets last week, Cincinnati had back-to-back wins of more than 20 points, including a 41-17 rout of Lamar Jackson and the Ravens. ... The Bengals have scored on 80% (18 of 20) of red-zone possessions, and the Browns 84.6% (22 of 26). ... Browns offensive line coach Bill Callahan is the father of Bengals offensive coordinator Brian Callahan. ... Bill Callahan was coach at Nebraska when Bengals coach Taylor played quarterback there. ... The Bengals' offense is second in the NFL in yards per pass play (9.15) and fifth in overall yards per play (6.2). ... Burrow is second in the league with nine passing plays of at least 40 yards. Burrow is third in TD passes with 20. ... Ja'Marr Chase, Burrow’s college teammate at LSU, is tops in the league with six receptions of at least 40 yards, third in yards receiving (786), and second with 14 receptions of at least 20 yards. ... Linebacker Logan Wilson is tied for second with four interceptions.

FANTASY TIP: Bengals WR Tee Higgins had four catches for a season-high 97 yards in the loss to the Jets last week. The team's leading receiver last season, he has been overshadowed by Chase, who had a down day. Chase had three receptions for just 32 yards and dropped a pass in the end zone.