Breakthrough? Young Jaguars learning how to win, or not lose 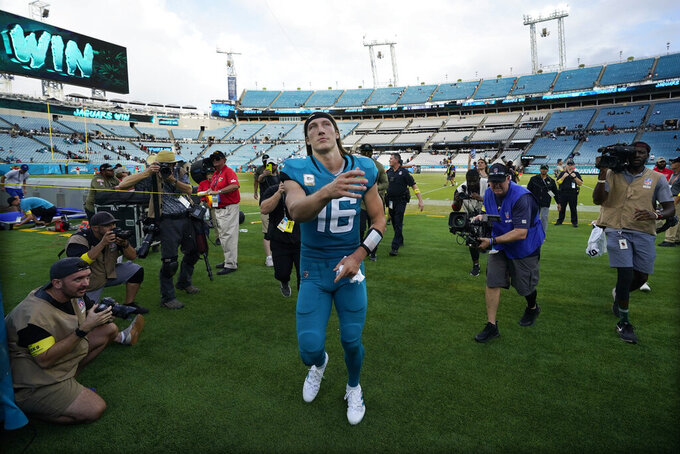 Jacksonville Jaguars quarterback Trevor Lawrence tosses his wristband to a fan after a win over the Las Vegas Raiders in an NFL football game Sunday, Nov. 6, 2022, in Jacksonville, Fla. The Jaguars won 27-20. (AP Photo/John Raoux)

JACKSONVILLE, Fla. (AP) — Maybe this was a breakthrough for the Jacksonville Jaguars.

Coach Doug Pederson has preached all season about his young team needing to learn how to win — or how not to lose — close games. The Jaguars had been 0-6 in one-score games entering Sunday against the Las Vegas Raiders, and they were tied or leading in the fourth quarter of five of those.

But something clicked down the stretch against Las Vegas as quarterback Trevor Lawrence, running back Travis Etienne and Jacksonville’s defense made the necessary plays to seal a 27-20 victory.

Lawrence’s final two drives set up field-goal attempts: Riley Patterson hit the right upright from 41 yards out and barely slipped in a 48-yarder that provided some cushion. And the defense forced a turnover on downs and a fumble as the Raiders tried to mount a comeback.

“We knew it was going to break open for us and it finally did,” Jags receiver Christian Kirk said.

Arguably more impressive than Jacksonville’s closeout was its comeback. The Jaguars (3-6) trailed 17-0 after the first 20 minutes thanks to a turnover and Raiders receiver Davante Adams getting open on almost every play.

But Jacksonville adjusted at halftime and mostly dominated after leaving the locker room. Vegas managed just 70 yards in the final two quarters, with Carr completing 5 of 15 passes and Adams being held to one catch for no gain.

Lawrence, meanwhile, completed his first 12 passes of the second half.

“Just kind of battling through the adversity was awesome,” he said.

How much the performance helps moving forward could be tested Sunday at AFC heavyweight Kansas City (6-2). The Jaguars last won at Arrowhead Stadium in 2007.

“It’s all steps in the right direction, right?” Pederson said. “It’s something now that we can build upon. Guys have that feeling, kind of the taste in their mouth. We’ve just got to capitalize and keep improving.”

Lawrence’s decision-making seemed as sharp as it’s been in two seasons. He was quick to either get rid of the ball or scramble. He completed 25 of 31 passes for 235 yards, with a touchdown, no interceptions and no sacks. He also ran six times for a career-high 53 yards.

“Some of the Raiders guys were, like, ‘Man, why do you have to get the ball out so fast?’” Lawrence said. “I’ve had to learn the hard way. I’ve learned my lessons. There’s still a lot more I’m going to learn in years to come and games to come, all those things. It’s a growing experience.”

Jacksonville’s backup running back position seems less than ideal. The Jaguars traded James Robinson to the New York Jets last month, turning the spot over to JaMycal Hasty. The deal came a week after Hasty broke free for a 61-yard touchdown run at Indianapolis.

But since that big scamper, Hasty has carried 10 times for 21 yards, with 12 of those coming on a third-and-28 give-up play against Denver in London.

Dawuane Smoot needs to play more. The sixth-year defensive end, a third-round pick by Jacksonville in 2017, has 3 1/2 sacks in the last two games and leads the Jaguars with five this season. He had two sacks against the Raiders, including one on a third-and-10 play in the final minute that essentially clinched the victory.

Rookie inside linebacker Devin Lloyd has been a stud at times this season. The 27th overall pick in the draft was the NFL’s defensive rookie of the month in September and leads all rookies with 69 tackles and has two interceptions. But he struggled against the Raiders and was seemingly pulled for part of a series.

Lloyd played 54 of 59 defensive snaps and finished with one tackle.

TE Evan Engram (back) and SS Rayshawn Jenkins (concussion protocol) could be limited in practice this week.

6.12 – Average yards per carry for Etienne in his four career starts. He has 465 yards rushing and four touchdowns in those games.

Win consecutive games again, something that has happened just four times in the last five seasons.