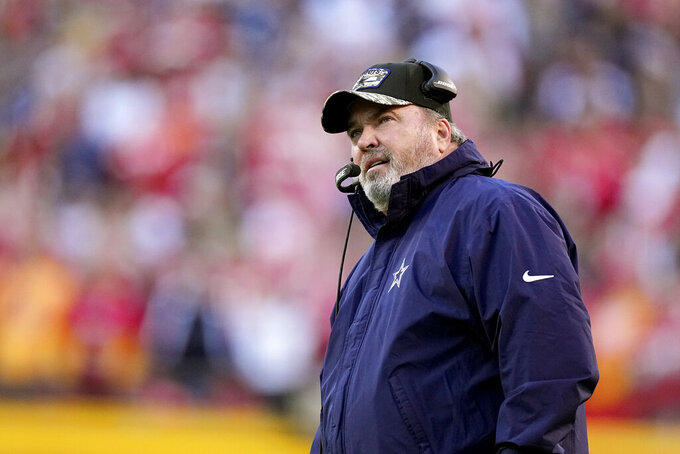 Dallas Cowboys head coach Mike McCarthy watches from the sidelines during the first half of an NFL football game against the Kansas City Chiefs Sunday, Nov. 21, 2021, in Kansas City, Mo. (AP Photo/Charlie Riedel)

The NFC East race is tightening up on Dak Prescott and the Dallas Cowboys, who could be without the quarterback's top two receivers in another game with the best pair of defensive ends sidelined on Thanksgiving.

A brighter medical outlook awaits in December if nobody else gets hurt, but the Las Vegas Raiders come first Thursday after Dallas (7-3) couldn’t overcome injuries while failing to validate its status as a Super Bowl contender against two-time defending AFC champion Kansas City.

“We went through everything that we went through last year for moments like this, to be able to move forward and for other guys to step in and take advantage of their opportunity,” said Prescott, who watched most of a 6-10 season in 2020 with a broken ankle. “That’s where playmakers and guys get better. We’re going to have to continue to do that with guys being out.”

At receiver, that list is topped by Michael Gallup, Cedrick Wilson and Noah Brown for now with Amari Cooper out for sure and CeeDee Lamb possibly joining him on the sideline.

Cooper won't play against his former team because of a positive COVID-19 test last week and the accompanying rules for unvaccinated players. The Cowboys gave the Raiders a first-round pick in a 2018 trade for Cooper. Assistant strength and conditioning coach Cedric Smith was added to COVID-19 protocols Monday.

Lamb sustained a concussion in the 19-9 loss to the Chiefs, but did participate in meetings Monday.

Star defensive end DeMarcus Lawrence is close to returning after being out since the opener with a broken foot, but the target date is more likely Dec. 2 at New Orleans. That's also the first week Randy Gregory (calf strain) is eligible to return from injured reserve.

It's also worth noting that running back Ezekiel Elliott is dealing with a knee injury that got a little worse with another awkward twist on a tackle Sunday, when division rivals Philadelphia and Washington each won a second consecutive game.

“We all understand the challenges that frankly we have to pick up as we move forward,” coach Mike McCarthy said. “We have a quick turnaround. We will take that experience and grow from it.”

Rookie LB Micah Parsons hasn't had much trouble getting pressure on quarterbacks when lining up at defensive end, a necessity with Lawrence and Gregory out. He had two more sacks against Patrick Mahomes, including a forced fumble Dallas recovered. With seven games remaining, Parsons has already tied DeMarcus Ware's rookie club record of eight sacks from 2005.

The Cowboys could use LT Tyron Smith, who has missed three consecutive games with an ankle injury. Dallas didn't protect Prescott very well (season-high five sacks) and didn't create much room in the running game.

LG Connor McGovern replaced the benched Connor Williams, but the key to making the line better could mean getting Terence Steele in the backup tackle spot, rather than a starting role, because experience is still an issue for the undrafted second-year player.

The pressure on Prescott helped contribute to his lost fumble and two interceptions. It was the 2016 NFL Offensive Rookie of the Year's fifth career game with at least three giveaways.

The defense deserves credit for keeping the Cowboys in the game when it looked like Mahomes and company might blow them out. Kansas City had to settle for a field goal after Prescott's fumble at the Dallas 22-yard line, and the Chiefs scored just three points in the final 44 minutes. The Cowboys give up a lot of big plays but still find ways to get stops.

The Dallas running game is averaging 88 yards per game over the past four outings after a five-game run at 185 yards per game. Elliott's per-carry average is at 3.2 yards the past two games when it was at 4.5 through the first eight.

The Cowboys were optimistic about Smith returning against the Chiefs, which could mean the short week doesn’t matter in trying to get the perennial Pro Bowler back in the lineup.

“If he is ready, he is ready. If he is not, he is not. Hopefully he will be ready to go on Thursday,” McCarthy said.

Elliott continues to downplay his knee injury, even though he keeps limping through portions of games. “It’s feeling better, but I rolled up on it, and kind of hurt it. Overall, it’s definitely getting better,” Elliott said.

McCarthy said S Donovan Wilson won't play against the Raiders after injuring a shoulder against the Chiefs.

The next two games are the last in a seven-game stretch outside the NFC East, which also means division opponents are bunched up at the end. If the Cowboys can make their three-game lead in the loss column bigger, their focus can be more on the race for seeding in the NFC.