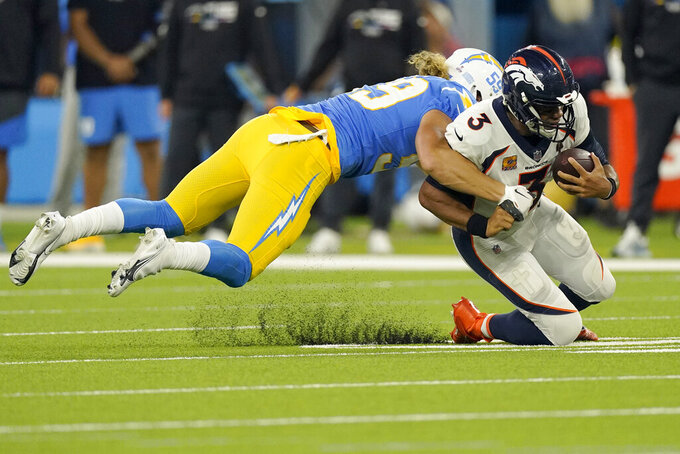 The offensive performances in prime-time games this season have been downright offensive at times.

From the more than 100 minutes of game action without a touchdown on Thursday nights to the recent Monday night slog between the Chargers and Broncos, teams playing on the NFL's biggest stage have struggled to score points.

That's more than 3 points per game below the daytime rate and a major reason why overall scoring is at its lowest point through six weeks since 2010.

Kansas City played in the three highest-scoring night games so far: a 27-24 win over the Chargers, a 30-29 victory over the Raiders and a 41-31 win over Tampa Bay.

Those are the only three night games when both teams scored at least 20 points, compared to seven of the 19 when neither team scored 20.

This past week had a couple of glaring examples of those prime time duds with Washington beating Chicago 12-7 on Thursday night and Chargers beating Denver 19-16 in overtime on Monday night.

The Broncos have been involved in four of the seven games as they have scored three TDs in prime-time games against Seattle, San Francisco, Indianapolis and the Chargers.

Denver had minus-9 net yards passing after halftime on Monday night, tied for sixth fewest in a game in the past 15 seasons. The Broncos became the first team since the 2017 49ers to lose in overtime in back-to-back weeks.

The Chargers had their marks of futility as Justin Herbert's 238 yards passing where the fourth fewest ever for a player with at least 57 attempts. Herbert also joined Warren Moon (1991 against Dallas) as the only QBs since 1950 to throw at least 55 passes and no TDs in a win.

On Thursday night, the Bears became the first team in 23 years to have at least three goal-to-go drives in a game and score on none of them. Cincinnati had four in a loss to Baltimore in 1999.

Chicago did manage to get a TD on a 40-yard pass from Justin Fields to Dante Pettis. That ended a stretch of 107:03 of game action on Thursday Night Football without a TD after Indianapolis and Denver failed to get any in the Colts 12-9 OT win in Week 5.

The Jets and Giants were tied for the worst record in the NFL over the previous five seasons at 22-59 with neither coming close to the playoffs.

Both could be in contention this season after strong starts with the Giants winning five of their first six games in their first season under coach Brian Daboll and the Jets at 4-2 in the second year under coach Robert Saleh.

This marks the sixth time since the merger and the first since 2010 that both the Jets and Giants had winning records after six games.

The Giants have gotten there thanks to three comebacks from double-digit deficits in the second half, joining the 1993 Eagles, 1981 Bengals and 1980 Dolphins as the only teams ever to do that in the first six games.

The three double-digit comebacks are tied for the most ever in an entire season for the Giants. The only other times they did it came in 2016 when they last made the playoffs and in 2007 and 2011 when they won the Super Bowl.

Atlanta's Marcus Mariota had a rare performance against the 49ers, completing 13 of 14 passes for 129 yards and two TDs and rushing for 50 yards and another score.

Mariota joined Hall of Famer Walter Payton as the only players since at least 1950 to throw at least two TD passes, have one or fewer incompletions, at least 50 yards rushing and a rushing TD in a game. Payton did it as a running back in 1983 against New Orleans.

Mariota joined Ryan Fitzpatrick (2020 vs. Jacksonville) and Frank Ryan (1964 vs. the Giants) as the only players in NFL history to throw at least two TD passes, run for at least one and complete at least 90% of passes with a minimum of 10 in a game.

Patriots coach Bill Belichick won his 324th game in the regular season and playoffs, tying Hall of Famer George Halas for the second most ever. Only Don Shula with 347 has more.

Belichick can pass Halas on Monday night with a win over Halas' old team, the Chicago Bears.

The last two wins for Belichick came with Bailey Zappe at quarterback. Zappe became the third rookie quarterback in the Super Bowl era to record a passer rating of at least 100 in his first two starts, joining Dan Marino and Andy Dalton.

Injuries to Tua Tagovailoa and Teddy Bridgewater have forced Miami to shuffle quarterbacks following a 3-0 start. The Dolphins have lost the last three games with Tagovailoa starting the loss at Cincinnati in Week 4, Bridgewater in Week 5 against the Jets and Skylar Thompson last week against Minnesota.

This marked the first time in Dolphins history they lost three straight with a different starting QB in each game. According to Sportradar, it has happened 46 times since the merger.