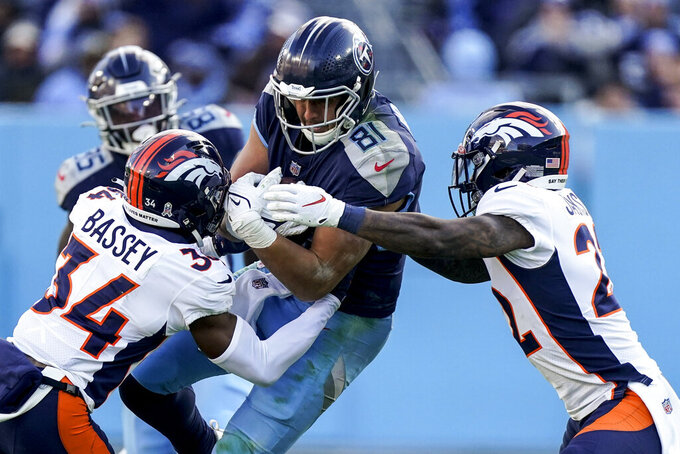 ENGLEWOOD, Colo. (AP) — Move over “Orange Crush.” Step aside “Steel Curtain.” Make way “Fearsome Foursome.” And Dallas, your “Doomsday” defense has been given fresh meaning with this year's Denver Broncos sporting their stingiest unit since 1971.

Call it the “All in Vain” defense.

The Broncos (3-6) are in danger of becoming the first team since the 1946 Pittsburgh Steelers to own both the NFL's stoutest defense and its feeblest offense.

The Broncos' 17-10 loss at Tennessee on Sunday — after a bye in which they changed nothing and actually watched their injury list grow — was a carbon copy of all their other defeats.

Stout on defense. Soft on offense.

“We’ve got to find a way to run the ball,” Hackett lamented after dialing up a season-high 48 drop-backs for Wilson in a one-score game.

Denver's only touchdown came on an audible by Wilson, but he had his eyes on the pass rushers more than on his targets after two more O-linemen got hurt, leaving the Broncos with third-stringers at both tackle spots and at center.

The Broncos entered the game without speedy receiver KJ Hamler (hamstring) and Jerry Jeudy left with an ankle injury he suffered on Denver's first offensive snap.

Wilson completed just half of his passes, got hit 18 times and was sacked a season-high six times, and the Broncos squandered a 10-0 lead, once again petering out after halftime.

They punted on their first five second-half possessions and their final drive ended with Wilson's game-sealing end zone interception.

Wilson now has seven TD throws and has been sacked a whopping 29 times in eight games.

The Broncos, who ran it just 25 times Sunday, are the only team that hasn't had a single rush for 20 yards this season.

Up next for the bungling Broncos are the languishing Las Vegas Raiders, who are 2-7 under first-year coach Josh McDaniels, who will be going for the season sweep in Denver this weekend after beating the Broncos 32-23 in September for his first win since getting fired by them in 2010.

The losing coach Sunday undoubtedly will face a growing chorus of fans calling for them to get fired.

“I learned a long time ago you're coaching for your job every day,” Hackett said Monday. "I mean, every single day you come in that building and you compete and you fight to be the best version of yourself and try to get the best out of everybody around you. That's just how this is; that's how I've always known it is. ...

But Evero made a big mistake by turning to a “prevent” defense after forcing the Titans to punt on their first six possessions. The result was a 13-play, 70-yard touchdown drive that cut their lead to 10-7 at halftime and ignited Tennessee's comeback.

The offense. So much for building off the rhythm Wilson had with his receivers on three TD drives in London two weeks ago. Hackett's halftime adjustments again went flat and Denver went scoreless in the second half. They've been blanked in the third quarter six times and only scored one third-quarter TD all season.

Hackett & Wilson. Hackett's offense is designed to be operated out of the pocket and Wilson wants to morph into a pocket passer, but it all seems so forced, robbing Wilson of the off-schedule magic that defined his time in Seattle.

At least Jeudy doesn't have a torn ACL as many feared when he grabbed the back of his left ankle after crumbling to the grass. Hackett termed it a minor injury and listed Jeudy as day to day. CB K'Waun Williams (knee) is expected to get a scope and miss a month. C Graham Glasgow (shoulder) is day to day and RT Billy Turner (knee), who has missed most of the season, is week to week.

78 penalties for 650 yards. That leads the league in both categories. The Broncos had eight infractions for 50 yards against the Titans, and they weren't even flagged for having an extra man in formation on a field-goal try.

The Beleaguered Bowl pitting Hackett and McDaniels. Throw out the records in this rivalry? Don't they both wish.