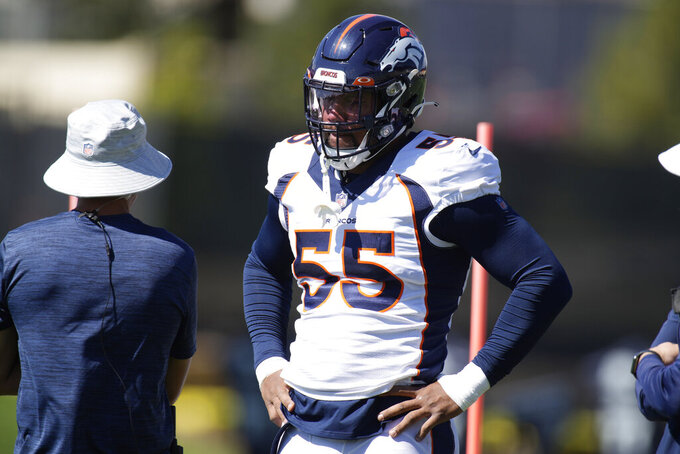 “His procedure today was a roaring success" without any complications, the Denver Broncos coach said. “And he'll be back at some point. I think it's in the six-week range would be the earliest, six to eight.”

Chubb went on IR a day after inside linebacker Josey Jewell did. Jewell will undergo surgery Thursday after tearing a chest muscle playing on special teams in the Broncos' win at Jacksonville last weekend.

With Jewell's season over, the Broncos signed inside linebacker Micah Kiser off the Los Angeles Rams' practice squad. They also promoted running back Damarea Crockett from their practice squad.

Kiser is a fourth-year pro who was drafted in the fifth round by the Rams in 2018. He's appeared in 26 games for Los Angeles, including nine starts in the Rams' first 10 games last season before he went on IR with a knee injury.

He had 77 tackles, three pass breakups and a forced fumble in those nine starts.

Kiser didn't make the Rams' roster this season, but was promoted from the practice squad last week and played on special teams in the Rams' 27-24 win at Indianapolis.

Last year he played for Los Angeles Chargers coach Brandon Staley, who was the Rams' defensive coordinator after serving as the Broncos outside linebackers coach.

Staley has patterned his defense after Fangio's, so the Broncos expect him to make a smooth transition.

“He's got a little bit of an advantage in that he spent the last year with the Rams, Staley was there, ran our system. So, there should be a quick carryover in learning for him.”

The Broncos might move rookie linebacker Baron Browning outside to give the team more options on the edge.

“It's a possibility, maybe not quite this week because we've got to see how much we can get out of Micah, if we can get him active and honed up enough. If we can't, then Baron's next in.”

Chubb sat out the opener and returned Sunday, but left in the second quarter after experiencing shooting pains while making a move to get to the quarterback.

Teddy Bridgewater was one of the first to console him on the sideline.

“I just told Chubb, ‘Man, hold your head up. There’s no reason to look down. Everything is still up from here. And everything you want is right ahead of you," Bridgewater recounted Wednesday.

“And I know it's tough in that moment, but I've been injured before and I know the frustration level, how it builds up, and I just wanted to be right there for him.”

Denver's dominant defense has already lost three starters, including cornerback Ronald Darby (hamstring), but that doesn't seem to have affected the unit.

“We played most of that game Sunday without them,” Fangio said. “So, a good bit of Sunday's game was without three starters, and all really good players and we won that game. And we'll continue to win. We've got good players backing them up and we feel confident.”

Wide receiver Jerry Jeudy suffered a high ankle sprain in the opener and guard Graham Glasgow sat out last week after playing through an irregular heartbeat at the Meadowlands in Week 1.

Glasgow was replaced by Netane Muti last week, but is expected back Sunday for the Broncos' home opener against the New York Jets (0-2). Fangio said Glasgow will be closely monitored.

“He's fine," Fangio said, "but we can't ignore what happened.”

Fangio was asked about how the Broncos will handle being a 10½-point betting over the Jets, according to FanDuel SportsBook and he said he ignores betting lines because of the whole “Any Given Sunday” philosophy.

“I don’t know Urban Meyer at all really, I met him the other day, shook his hand before the game and after the game and his comment to me was, ‘Every week it’s like playing Alabama in the NFL,’" Fangio recounted. "And that’s it. Everybody’s capable of beating everybody in this league.”

NOTES: Taking Crockett’s spot on the practice squad is OLB Pita Taumoepenu, a fifth-year pro who was with the Broncos this offseason. ... NT Mike Purcell (knee) didn't practice Wednesday.