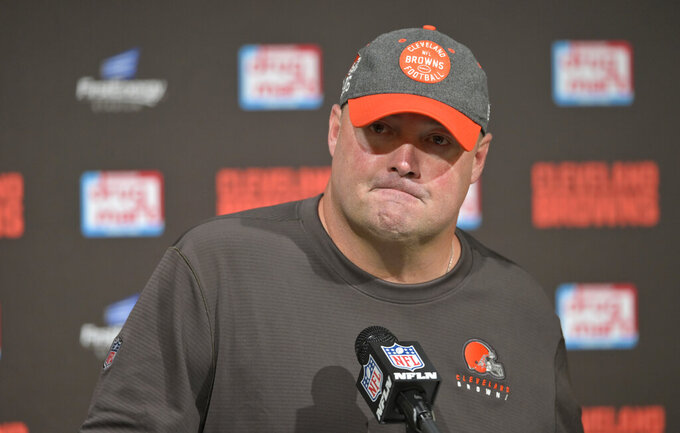 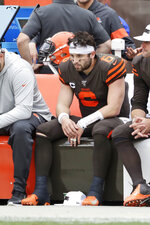 The Tennessee Titans sacked him five times, chased him all over the field and knocked some of the defiance out of Cleveland's brassy quarterback in Sunday's opener.

"I'll be all right," Mayfield said.

It's too early to know if the Browns will recover.

With the NFL waiting to see if the hype heaped upon them was deserved, the Browns fizzled and failed. They committed a mind-numbing 18 penalties and showed little discipline during a 43-13 loss that has created doubt about a talented team that might not be as good everyone thinks.

Cleveland had more yards in penalties (182) than rushing (102). The suspect offensive line leaked; tackle Greg Robinson got ejected for kicking Titans safety Kenny Vaccaro in the head; the defensive line didn't live up to its billing; and star wide receiver Odell Beckham Jr.'s debut was most notable because he played while wearing a $250,000 watch.

On Monday, first-year coach Freddie Kitchens cautioned against an overreaction to the debacle.

"It is one game in a 16-game schedule," he said. "We are very disappointed in the lack of discipline that we showed, the loss of composure that we showed at times, and just overall not doing a good enough job from a coaching perspective and a player perspective to get the job done in a positive manner."

As the final seconds ticked off the clock Sunday, the few hardy Browns fans who hung around until the bitter end booed in a scene that's been repeated numerous times in recent years.

These Browns are supposed to be different.

The Browns showed their firepower by taking the opening kickoff — with Mayfield luckily dodging an interception on his first throw — and driving for a touchdown in the first five minutes. They even overcame a 15-yard penalty and Mayfield used his full complement of weapons before backup Dontrell Hilliard scored on a 4-yard run.

This is what Kitchens has in mind for his offense: high tempo, chunk plays, electric.

The opening possession was as good as it got as the Browns converted just 1 of 10 third downs.

The lack of discipline was alarming. The 18 penalties were the most by the Browns since 1951, and it would have been 20 if the Titans hadn't declined two.

Kitchens harped on mental mistakes during the preseason, but the message didn't sink in. The Browns made silly ones, and a few far more worrying with Robinson getting tossed and defensive end Myles Garrett being flagged for swatting Titans tight end Delanie Walker across the head.

By contrast, the Titans had six penalties.

Robinson will be fined, not suspended, for the blow to Vaccaro's head. He said it was unintentional.

"I hurt the team, honestly, and I feel like if I could have it back, I would do things differently," Robinson said. "But it was basically just a reaction. I couldn't help myself."

It's never good when the punter outshines the rest of the team, but rookie Jamie Gillan lived up to his "Scottish Hammer" nickname and pounded the ball. Gillan averaged 46.6 yards on five punts, knocking three inside the 20-yard line.

There was concern about Cleveland's offensive line before the opener, and those worries have increased.

Robinson's ejection was followed by his replacement, Kendall Lamm, hurting his knee. That forced Kitchens to move Chris Hubbard from right tackle to left and play Justin McCray, who had only been with the team for a week.

But even at full speed, the group didn't open holes or keep Mayfield from harm.

Mayfield suffered a hand injury, which is not believed to be serious. However, Kitchens hesitated when asked if the QB will miss practice time this week.

58 — The number of consecutive games Beckham has made at least three receptions, the third-longest streak in league history.

Move on. One of Kitchens' favorite expressions is: "The rear view mirror is a lot smaller than the windshield. I prefer to look through the windshield."

But there's a lot coming at the Browns, who whether they like it or not have a huge target placed on them because of outside expectations.

The Titans reveled in making the Browns lose their composure. There's no doubt other teams will try the same, beginning next Monday night at the Jets.