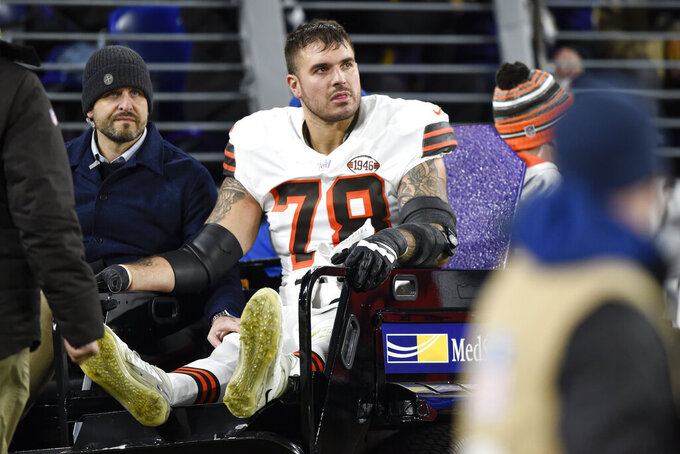 Cleveland Browns offensive tackle Jack Conklin leaves the field on a cart during the first half of an NFL football game against the Baltimore Ravens, Sunday, Nov. 28, 2021, in Baltimore. (AP Photo/Gail Burton)

Conklin ruptured his patellar tendon while pass blocking in the first quarter against the Ravens, who held the Browns to a season-low 40 yards rushing. An MRI taken Monday confirmed the diagnosis of a tear.

Coach Kevin Stefanski said he was “sick” over Conklin's injury.

“Obviously, Jack's a big part of what we do,” Stefanski said Monday. “He's a good man, good teammate.”

Stefanski wouldn't speculate whether Conklin would be back in time for training camp next year.

“It’s a serious injury. It’s unfortunate,” Browns guard Joel Bitonio said. "I know he has the right makeup to come back from this, but it’s one of those things where you never want to see a guy seriously hurt.

"We know we play a dangerous game, but that was a tough one. He’s in our thoughts right now. We’re hoping surgery goes well and he can come back from that.”

Conklin's injury only complicates matters for Cleveland's offense, which has scored 17 points or fewer in six of the past seven games.

A two-time All-Pro, Conklin was only activated from injured reserve Saturday after missing three games with a dislocated elbow. He got hurt while pass blocking on the Browns' second possession against the Ravens.

Conklin's knee collapsed under him as he back-pedaled and he struggled just walking to the sideline before being carted to the locker room.

Stefanski said tight end Harrison Bryant sustained a high ankle sprain in the 16-10 loss. Also, he said running back Kareem Hunt should be fine after being kept out late in the game after his calf tightened.

Without Conklin, the Browns' high-powered running game sputtered as the Ravens crammed the line of scrimmage with extra defenders and held Cleveland to 116 yards below the team's average coming into the game.

The 27-year-old Conklin is in his second season with the Browns, who signed him to a three-year, $42 million contract after he played four seasons with Tennessee. He helped Cleveland make the playoffs for the first time since the 2002 season.

Backup Blake Hance replaced Conklin on Sunday night and filled in for him earlier this year. Hance has had some issues at tackle after playing mostly guard.

“He’s going to compete and he’s going to fight and he’s going to do everything he can to give us the best opportunity out there,” Bitonio said of Hance. "He has experience now. We know we have James (Hudson III) and Michael Dunn, guys who could potentially play that position as well, but Blake has the most experience.

"He’s going to fight, and he’s going to try to find a way to be the best he can be out there. That’s really all we can ask of him.”

The Browns have their bye this week before hosting the AFC North-leading Ravens on Dec. 12.

(Corrects to Conklin being two-time All-Pro.)