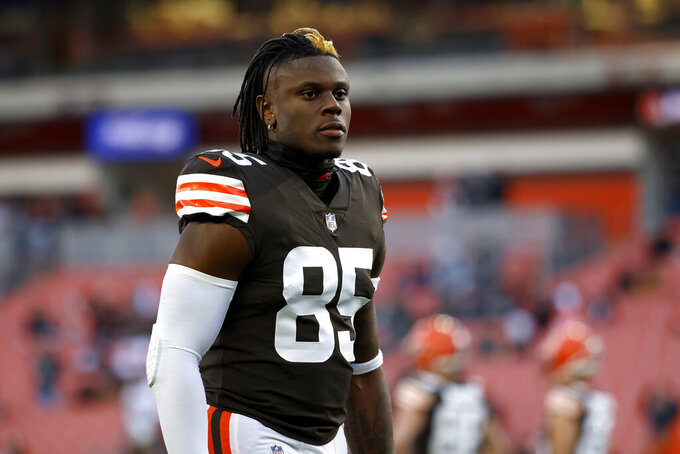 FILE - Cleveland Browns tight end David Njoku (85) warms up prior to the start of an NFL football game against the Las Vegas Raiders, Monday, Dec. 20, 2021, in Cleveland. The Browns have used a franchise tag for next season on tight end David Njoku, preventing him from hitting the free agent market. (AP Photo/Kirk Irwin, File)

CLEVELAND (AP) — The Browns are holding on to David Njoku.

Cleveland placed its franchise tag for next season on the tight end, who once asked to be traded but has become one of the team's top targets and says he wants to finish his career with the Browns.

A first-round pick in 2017 from Miami, Njoku was one of the few bright spots last season for the Browns, who went 8-9 and missed the playoffs amid high expectations. He caught 35 passes for 475 yards and four touchdowns.

The Browns believe the 25-year-old Njoku can produce even more and have spoken to his agent about a long-term contract.

It's a dramatic turnaround for Njoku, who asked to be traded when the Browns acquired Austin Hooper as a free agent and drafted Harrison Bryant. He has developed into one of the team's most dependable threats and a core member of Cleveland's offense.

The franchise tag means Njoku will be under contract through the 2022 season for roughly $11 million. The team is expected to continue negotiating a long-term deal with him.

Following the season, Njoku said his heart was in Cleveland.

“I love it here. I love it here to the core,” he said. "I honestly want to be here for the rest of my career, so my agent and the Browns are still in talks, we’re still negotiating, figuring out what we can do, and we’ll go from there.”

Njoku has 148 career receptions for 1,754 yards and 15 TDs in five seasons with the Browns. His 71-yard touchdown catch against the Los Angeles Chargers last season was the longest in the NFL by a tight end.