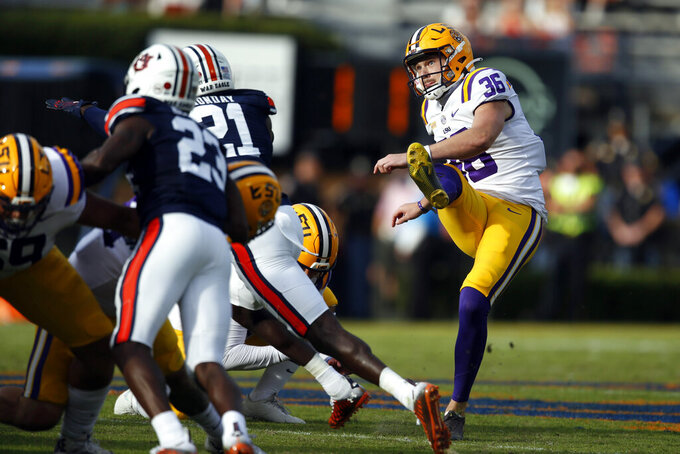 FILE - LSU kicker Cade York (36) boots a field goal during the second quarter of an NCAA college football game against Auburn, on Oct. 31, 2020, in Auburn, Ala. The Cleveland Browns selected York in the fourth round (124th overall) of the NFL draft. (AP Photo/Butch Dill, File)

CLEVELAND (AP) — Cade York has already kicked out his competition with the Browns.

Cleveland released kickers Chase McLaughlin and Chris Blewitt on Monday, two days after selecting York, one of college football's best kickers, in the fourth round of the NFL draft to upgrade its wayward kicking game.

The Browns have been plagued by poor placekicking in recent years. McLaughlin started well last season, making his first nine field-goal tries before struggling and finishing 15 of 21. He went 36 of 37 on extra points.

York's addition gives the Browns a kicker they hope can match up with the others in the AFC North: Baltimore All-Pro Justin Tucker, Pittsburgh's Chris Boswell and Cincinnati's Evan McPherson, whose stellar rookie season was a key to the Bengals making it to the Super Bowl.

York made 54 of 68 field-goal tries and 164 of 168 extra points over three years at LSU. His career-best 57-yarder beat Florida in 2020 when McPherson kicked for the Gators.

The Browns nabbed him in the fourth round with the 124th overall pick.

“Realized that is a little high for where kickers typically go,” general manager Andrew Berry said. "But we do think that he is an excellent prospect and has a good chance to be a good kicker for a long time.”

Santos-Silva spent two seasons with the Red Raiders after transferring from Virginia Commonwealth. The 6-foot-6, 260-pounder played youth football before stopping as a high school freshman so he could concentrate on hoops.