Browns' Schafrath, who blocked for 3 Hall of Famers, dies 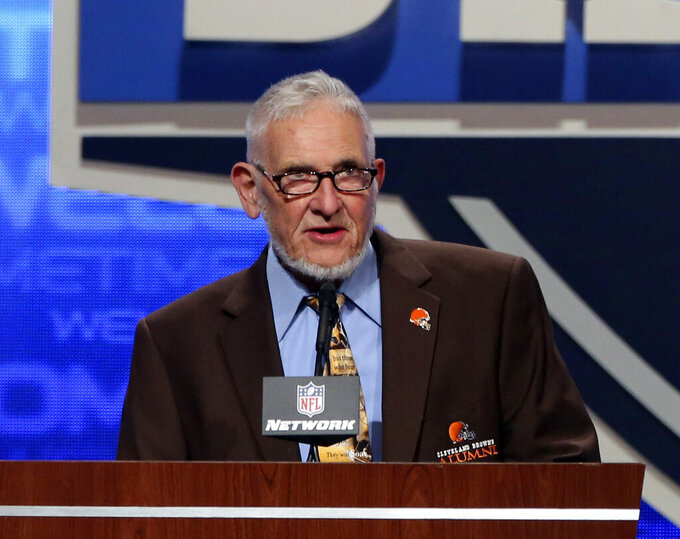 FILE - In this April 26, 2013, file photo, former Cleveland Browns player Dick Schafrath announces an NFL football draft pick during the third round at Radio City Music Hall in New York. Schafrath, an offensive tackle who blocked for Browns Hall of Fame running backs Jim Brown, Leroy Kelly and Bobby Mitchell before going into politics after retiring, has died. He was 84. The team said Schafrath died on Sunday, Aug. 15, 2021. No cause of death was given. (AP Photo/Mary Altaffer, File)

CLEVELAND (AP) — Dick Schafrath, a star offensive tackle for the Cleveland Browns who blocked for Hall of Fame running backs Jim Brown, Leroy Kelly and Bobby Mitchell before going into politics after retiring, has died. He was 84.

The team said Schafrath died on Sunday night. No cause of death was given.

“He was a Cleveland Brown and Ohioan to his core," the Browns said in a statement on Monday. "Schafrath’s unmatched work ethic helped establish what it means to be a Cleveland Brown. ... We send our deepest condolences to his family.”

Nicknamed “The Mule” by his teammates for his determination, Schafrath was a four-time All-Pro during a career with Cleveland from 1960-71. After he stopped playing, Schafrath was an assistant coach with Washington on coach George Allen's staff before entering politics and serving as a state senator in Ohio.

Schafrath played at Ohio State before he was drafted in the second round by the Browns in 1959. He was an integral part of Cleveland's 1964 team, which shocked heavily favored Baltimore to win the title, and opened holes for Brown, Kelly and Mitchell in their decorated careers.

“I played behind Dick for one season and he was just a pleasure to be around,” said former Browns tackle and broadcaster Doug Dieken. "Not a lot of guys would have taken me under their wing the way he did. He was a great player. His credentials merit the Hall of Fame, but he was also a first class person.”

Schafrath was elected into the team's Legends Club in 2003.

“Right after I was drafted, I learned about the rich history of the left tackle position for the Cleveland Browns,” said Joe Thomas, a 10-time Pro Bowler with Cleveland. "Some of the NFL’s all-time greats lined up in that spot — from Lou Groza to Dick Schafrath to Doug Dieken.

"Dick helped set the standard for left tackles in the NFL, and I am truly saddened to hear of his passing.”

He played football and baseball in high school and considered signing with the Cincinnati Reds before enrolling at Ohio State and playing for legendary coach Woody Hayes.

Schafrath played offense and defense for the Buckeyes and helped lead them to a national championship in 1957.

After being drafted by the Browns, Schafrath enlisted in the U.S. Air Force and due to his commitment hardly practiced with his teammates during his first two seasons.

Schafrath was selected to seven Pro Bowls before his retirement in 1971.