Bubble trouble? Jags' Bryan hoping to do enough in finale 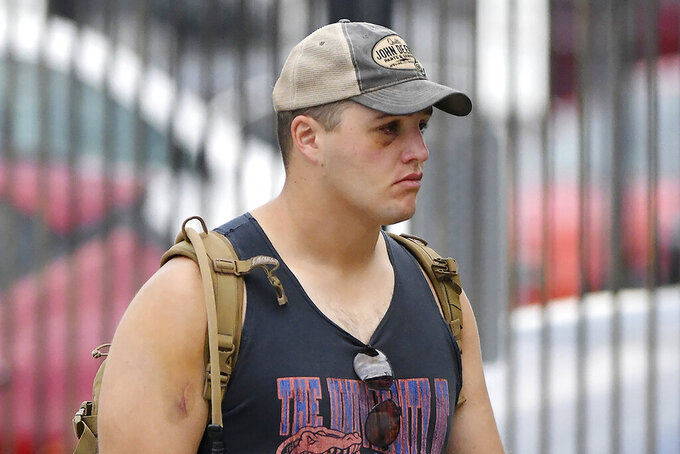 FILE - Jacksonville Jaguars' Taven Bryan arrives for NFL football training camp in Jacksonville, Fla., in this Tuesday, July 27, 2021, file photo. Taven Bryan started the month with a black eye. He might end it with a bruised ego. A first-round draft pick 3½ years ago, Bryan is squarely on Jacksonville’s roster bubble as the Jaguars prepare to close out the preseason at Dallas on Sunday. (Bob Self/The Florida Times-Union via AP, File)

JACKSONVILLE, Fla. (AP) — Taven Bryan started the month with a black eye. He might end it with a bruised ego.

A first-round draft pick 3½ years ago, Bryan is squarely on Jacksonville’s roster bubble as the Jaguars prepare to close out the preseason at Dallas on Sunday.

No one would be shocked to see new coach Urban Meyer cut the former Florida standout next week even though Bryan has been praised recently. After all, his production has yet to match his potential.

“The past is what it is, and I can’t control that,” Bryan said Friday. “But I can control what I’m doing going forward.”

Availability has been his best ability. Although coaches and teammates rave about his strength and power, he lacks awareness and often looks lost when he does reach the backfield.

Meyer said earlier this month that Bryan’s work ethic had been off the charts during the offseason.

“He’s not had the production in his career that (matches) his God-given skill, but I love the guy,” Meyer said. “Just a really talented, good person, and we’re going to coach him hard.”

Bryan, however, was unavailable early in training camp, first on the non-football injury list because of an off-the-field accident that Meyer said was “no one’s fault” – he arrived at the facility with a black eye. He then spent nearly two weeks on the COVID-19 list.

“I didn’t get beat up,” Bryan said, who added “no comment” when asked if was involved in a car accident.

“It was kind of a crappy deal," he said. “I really wasn’t doing anything bad to get injured like that. I got injured because I was trying to chill out before camp starts. And then I got sick and then just kind of postponed everything, kind of slowed down the momentum.”

He returned in time to play in the team’s second preseason game at New Orleans on Monday night, but he finished with no tackles and a quarterback hit in 26 snaps. He played more than any of the team’s other defensive linemen, quite possibly because the Jags wanted to get a better look at a player they believe might thrive in a new system and with new coaching.

“If he continues to impress like he did last week, we’ll find a place for him,” defensive coordinator Joe Cullen said.

Bryan is entering the final year of a $10.15 million rookie contract that included nearly $9 million guaranteed. He’s due to make $1.86 million this season and count $3.23 million against the salary cap. Cutting him would save the Jags about $1.16 million.

Although Jacksonville’s decision won’t be based on money, the team has been preparing to replace Bryan for months.

“Probably the biggest and most important thing to me is I don’t want to let my teammates down," Bryan said.