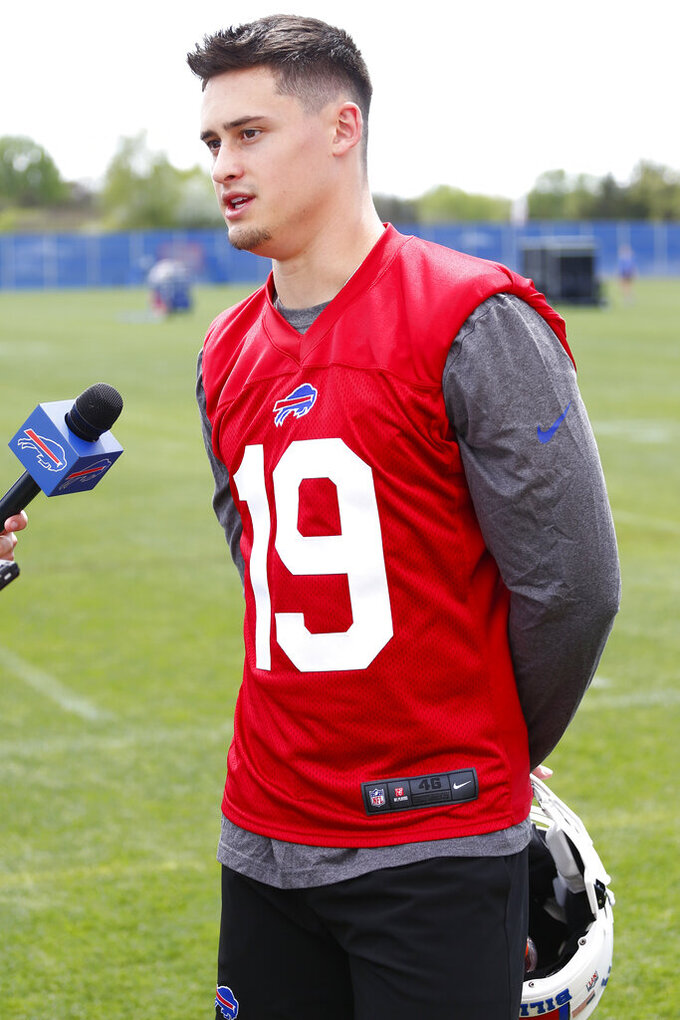 Arriving in Buffalo for the Bills' rookie minicamp, Matt Araiza was unhappy with the weather. After all, the San Diego native has plenty of experience when it comes to 85 degrees and sunny.

Araiza noting the near-perfect conditions traces to a desire to get accustomed to the winter chill and swirling winds that make the Bills’ home one of the NFL’s more challenging places for punters.

He didn't have to deal with cold weather very much during his three years at San Diego State, where the Ray Guy award-winner established himself as one of college football’s premier punters. Fourth downs turned into must-watch moments because of Araiza’s ability to flip the field in setting the major college football record with a punting average of 51.19 yards.

The 21-year-old Araiza became the third punter selected in the draft last month, when Buffalo chose him in the sixth round to the delight of a fanbase already fascinated by his ability and nickname.

To be clear, he’s not a big fan of “Punt God,” saying: “I understand it’s a huge compliment, but I think it’s a little too much.”

Though he doesn’t lack in confidence, Araiza realizes he is nowhere near a finished product after leaving school following his junior season, with just one year of handling the Aztecs’ full-time punting duties.

Aside from getting used to playing in severe weather, there are several questions he must answer to win the Bills job over returning veteran Matt Haack.

Having also doubled as the Aztecs’ placekicker, Araiza is not accustomed to holding, which has become a key duty for NFL punters. Another issue is improving his hang time from an average of four seconds at college to five, which is considered a benchmark at the pro level.

“That’s maybe one of the things that I’m most excited for is that I know that I have so much to get better at,” said Araiza, who spent the offseason improving his craft under the guidance of Patriots punter Jake Bailey, as well as former Chargers kicker Nick Novak and Seattle’s Jason Myers. “I think that was my biggest upside as a player going into this draft is that I don’t believe that I’ve really scratched the surface of what I’ll be able to do.”

Araiza’s self-awareness feeds into the slow-but-steady message Bills coach Sean McDermott delivered to his rookies preparing for their first day of practice.

McDermott specifically went out of his way to downplay the buzz Araiza has generated.

“He hasn’t even punted yet at all, so let’s just hope he gets out there and gets his shoes tied right, which I’m sure he will,” he said.

And yet, McDermott couldn’t resist cracking a joke in acknowledging how Araiza’s reputation — and booming left leg — preceded him.

“That’ll be his next trick,” McDermott said, laughing. “We’ll get a hot-air balloon out there for the guy to catch it.”

The sky could well be the limit for Araiza.

One of his more famous plays last season was dubbed “The Moon Shot,” describing an 81-yard punt at Air Force. It came on the heels of an 86-yarder at San Jose State a week earlier.

Araiza’s mere potential was enough in convince the two-time defending AFC East champions to draft him after Haack’s inconsistencies led to Buffalo finishing 31st in the NFL in averaging 37.6 yards punting. Haack, however, excelled as a capable holder for kicker Tyler Bass.

The Bills’ emphasis on punting was considered secondary in light of a Josh Allen-led offense that ranked third in the NFL with 1,143 snaps. Buffalo attempted just 52 punts, including two games in which Haack didn’t attempt one, to finish tied for 28th.

None of that makes a difference with Araiza.

“If being part of a great team means you punt less, that’s fine. When it’s my job, I have to do it well,” he said.

Araiza's commitment to improving his craft in Buffalo comes at the expense of attending San Diego State's graduation ceremonies on Sunday.

“I want to be here. I want to practice,” said Araiza, who majored in computer science, economics and stats. “I want to be in this facility and work towards earning the job. That’s a lot more important to me.”