Businesses in NFL cities bracing for possibility of no fans 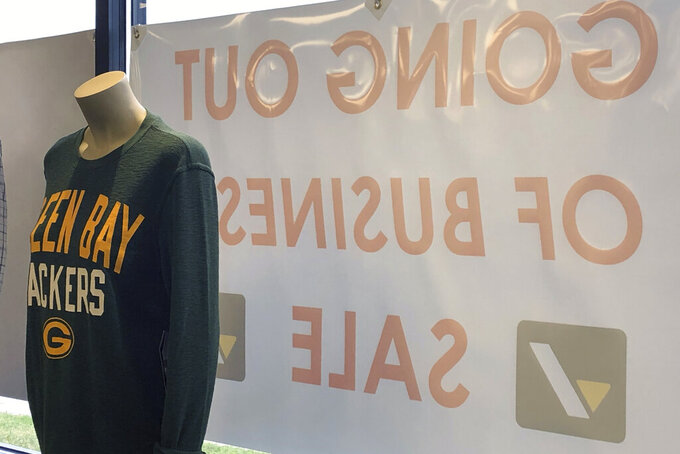 A "Going Out of Business Sale" sign is shown in the window of the Green Bay Jersey Store, several blocks from Lambeau Field in Green Bay, Wisc., Monday, Aug. 31, 2020. Businesses near NFL stadiums have been hit hard due to pandemic-imposed attendance restrictions this season.(AP Photo/Steve Megargee)

GREEN BAY, Wis. (AP) — Hotel clerks in this town know exactly when the NFL releases its schedule each year. The incessant ringing of the telephone serves as its own alarm.

“The second that schedule comes out, the phones just go off the hook,” said Kelsie Basten, the front desk manager at St. Brendan’s Inn in Green Bay. “It’s just insane.”

Now the phones are ringing for an entirely different reason.

The Green Bay Packers have announced they won’t have any spectators for at least their first two home games due to the coronavirus pandemic. All those fans who made reservations back in April are canceling travel plans.

That’s crushing news for hotel operators, restaurant owners and store managers whose budgets depend on those home football weekends.

“It’s scary times right now,” Basten said. “We’re kind of just going day by day, payroll by payroll, trying to get as much business as we can right now to keep us going through.”

Similar scenes are taking place in NFL markets across the nation as businesses deal with the fallout from pandemic-imposed attendance restrictions.

Most NFL teams won’t have fans at home games for the start of the season. That’s an additional blow for restaurants and sports bars already facing budget issues as they follow protocols brought about by COVID-19.

For instance, Detroit’s four major pro sports teams all play within a mile of one another, and the businesses surrounding those stadiums rely on fans stopping by before and after games. The Brass Rail Pizza Bar near Ford Field typically has a capacity of 260, but only 130 people are allowed in for now due to state policy.

“Whatever capacity that we have right now, if we fill it up, we’d be grateful,” said Brass Rail manager Mohamed Elmardi, who hopes fans will watch Lions games at his restaurant because they can’t be in the stands.

In downtown Nashville, Pat Martin closed Martin's Bar-B-Que Joint in April due to the pandemic. Martin has been closely monitoring whether the Tennessee Titans will give him reason to reopen.

Tennessee has only announced fans won’t be at the home opener Sept. 20 against Jacksonville. Martin needs the Titans to fill Nissan Stadium to at least 50% capacity, or opening back up wouldn’t be worth the expense.

“It’s a constant thing when you’ve got a restaurant now that it’s closed, you’re looking for the first blink of light at the end of the tunnel,” Martin said.

As the smallest NFL market, Green Bay is being hit particularly hard.

Located about 115 miles north of Milwaukee, Green Bay has a population of just over 100,000. Brenda Krainik, the director of marketing and communications for the Greater Green Bay Convention & Visitors Bureau, estimates that every Packers home football weekend brings the community about $15 million.

Krainik noted that several local businesses have pivoted their focus as they face the possibility of an entire season without Packers fans. Her bureau has increased its promotion of the area’s outdoor activities, such as fishing and hiking. She noted how a local winery had started hosting outdoor yoga classes and live entertainment.

“People are being creative about outdoor recreation in ways that they’ve just not been before and that’s amazing to see because they are small businesses making it during a pandemic,” Krainik said. “But it definitely won’t replace 80,000 fans in the stands here in Green Bay.”

Even if the Packers do have spectators for their final six home games, CEO Mark Murphy says attendance wouldn’t exceed 10,000 or 12,000.

The business impact already has been felt since spectators weren’t permitted at training camp, which typically draws flocks of fans as children loan players bicycles to make the short ride from Lambeau Field to practice at Ray Nitschke Field.

Theresa Barlament owns The Pancake Place, a Green Bay restaurant that’s been open for over four decades. She says August typically is her busiest month due to training camp but revenues last month fell about 30% from the previous year.

And now she won’t have visitors from out of town lining up during home football weekends.

“We have our regulars that will keep us afloat,” Barlament said. “It’s just so much fun when you have people from out of town all in the parking lot, the green-and-gold lining your seats inside and yelling ‘Go Pack Go’ on Packer mornings. It’s a really fun environment, and I don’t foresee that happening (this year).”

Other businesses have seen steeper declines. That’s evident from the “going out of business” signs outside the Green Bay Jersey Store, which has been selling Packers merchandise several blocks from Lambeau Field for over 20 years.

The decision was made a few months ago with the anticipation that fans probably wouldn’t be allowed at games. The store is staying open while it sells its remaining stock.

“In the end, because brick-and-mortar retail has changed so much anyway and the fact this year’s business was going to obviously be so uncertain and so far down from what it normally would be any way you look at it, the owner just made the decision to close the doors,” said Mike Walters, the store’s manager.

The lack of fans is proving especially costly for Green Bay’s hotels and motels.

Linnea Berg manages the Bay Motel and said rates are as low as $59 per night for a room with a queen-sized bed. On Packers home football weekends, that price increases to $190 per night with a two-night minimum stay required.

Berg said the Bay Motel has 53 rooms but hasn’t sold more than 30 of them for any night since back in January when it had no vacancies for the Packers’ NFC divisional round playoff victory over Seattle.

They’re trying to find ways to fill those rooms while hoping full crowds will return to NFL games by 2021.

“I don’t think we’d be able to survive two non-Packers seasons,” Berg said. “Not in Green Bay. Not with what we have seen so far.”