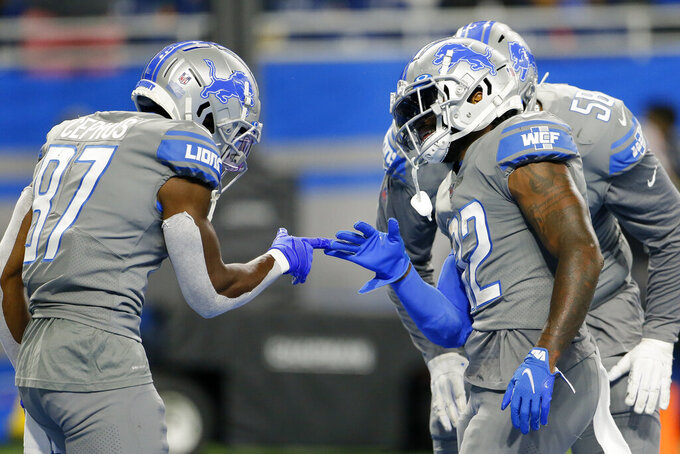 Detroit Lions running back D'Andre Swift (32) celebrates his two-yard touchdown run with Quintez Cephus (87) in the second half of an NFL football game against the Baltimore Ravens in Detroit, Sunday, Sept. 26, 2021. (AP Photo/Duane Burleson)

DETROIT (AP) — Detroit Lions coach Dan Campbell watched the film of Sunday's 19-17 loss to the Baltimore Ravens and there was one thing he wasn't seeing.

On too many plays, including Lamar Jackson's 36-yard pass to Sammy Watkins on fourth-and-19 in the final 30 seconds, Campbell couldn't find the coordination his defense needed in the passing game.

“We had a lot of communication errors, and they were really a lack of communication more than anything else,” Campbell said. "We have to get much more demonstrative and be very clear and concise and pass along the information.

“The problems we had yesterday weren't because of our scheme. We weren't communicating between our linebackers and our back end and it hurt us.”

Jackson threw for 287 yards and a touchdown, but the coverage breakdowns meant it could have been much worse. Marquise Brown got open three times for what should have been touchdowns but dropped all three passes.

Campbell said improving the communication will be a focus of this week's practices, but he realizes it won't be perfect on a young, banged-up defense.

“We've got a lot of babies out there and they made some young errors,” he said. “You are going to have that, but the veterans have to step up and be even louder. If I have to stop drills this week to point that out, I will.”

Despite Jackson's passing numbers, Campbell saw some positives in the film.

“I thought our defense was much better in terms of playing with aggressiveness and focus,” he said. “I think every player on our defensive line had a winning performance. We need them to impact Lamar's game and they did that — we got pressure, we got hits and we got sacks. I was pleased watching that.”

Campbell confirmed the team hadn’t heard from the league about the apparent delay-of-game penalty that wasn’t called on the next-to-last play of the game. If it had, Jackson would have had to throw a desperation pass; not even Tucker can hit from 71 yards.

Detroit continues to get strong performances out of running backs D'Andre Swift and Jamaal Williams. They combined for 89 yards and two touchdowns on 26 carries, and another 85 yards on nine catches. After a scoreless first half, Detroit's offense came alive when it started getting Swift more touches.

“We saw he had the hot hand, so we wanted to get the ball into his hands and let him make plays,” Lions quarterback Jared Goff said.

The Lions still haven't been able to establish a vertical passing game. Detroit's wide receivers caught nine passes against the Ravens, but for only 87 yards — fewer than 10 yards per catch. Campbell said he didn't think the passing game ever got into a rhythm after the slow start.

As the Saints were trying to save the game on their final drive, Jackson was sacked on first down by Romeo Okwara, and then hit again on a second-down incompletion. This time, while the jersey still said “Okwara,” it was little brother Julian on the hit.

“It's been a while since I've got many reps in a game, but I just went out there and attacked like I do every day in practice,” Julian said. “It was definitely exciting to get in there and make some plays.”

Whether it was because of poor communication or bad coverage, safety Will Harris was the closest Lions player to several of the wide-open Ravens receivers. It was most obvious on the fourth-and-19 play in the final minute, when Harris was chasing Watkins before the 36-yard reception.

The Lions got through the game without significant injuries. OT Taylor Decker (hand) is eligible to return in early October, and isn't likely to play Sunday in Chicago, but could be back after the bye week.

The Lions will be working hard to improve the pass defense, but after facing Jimmy Garoppolo, Aaron Rodgers and Jackson in the first three weeks, they shouldn't have as much trouble with a flawed Chicago offense.