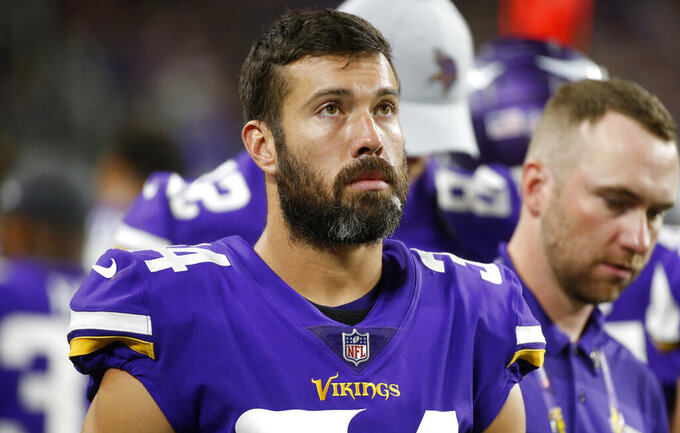 FILE - In this Friday, Aug. 24, 2018 file photo,Minnesota Vikings defensive back Andrew Sendejo walks on the sidelines during the second half of an NFL preseason football game against the Seattle Seahawks in Minneapolis. The Minnesota Vikings have released right guard Mike Remmers and declined an option on safety Andrew Sendejo's contract, clearing more than $10 million in space under their salary cap. The moves were made Monday, March 11, 2019 when NFL teams could begin negotiating deals with players eligible for unrestricted free agency on Wednesday. (AP Photo/Bruce Kluckhohn, File)

MINNEAPOLIS (AP) — The Minnesota Vikings have a little bit more flexibility to spend on offseason renovations, after moving on from two veteran starters.

By releasing right guard Mike Remmers and declining an option on safety Andrew Sendejo's contract, the Vikings cleared more than $10 million in space under the salary cap on Monday as NFL teams were allowed to begin negotiating deals with players eligible for unrestricted free agency.

The Vikings also tendered contracts to safety Anthony Harris and backup offensive tackle Rashod Hill, who were set to become restricted free agents when the market opens on Wednesday.

The 29-year-old Remmers moved from tackle to guard and started all 16 games last season, his second with the Vikings, but the offensive line continued to be a source of trouble for a team that ranked just 19th in points and 20th in yards in 2018.

Brian O'Neill fared relatively well at right tackle as a rookie, so moving Remmers back to his original position was not a viable option for the Vikings. His agent, Brett Tessler, said on Twitter that he was approached by the team about a restructured contract, but the two sides didn't reach an agreement. Remmers, who signed a five-year deal in 2017 with a maximum value of $30 million, earned $11.5 million in two seasons with the Vikings. His departure cleared $4.55 million under the $188.2 million cap, leaving the team with a $1.8 million hit for the remaining prorated portions of his signing bonus.

"This is the decision that was made," Tessler said, "and we look forward to our next opportunity."

The 31-year-old Sendejo parlayed special teams success into a place in the starting lineup beginning in 2013, but a groin injury limited him to just five games last season. Though Sendejo started 58 of a possible 96 games over the last six years, the Vikings never stopped considering other options for the back of the secondary next to four-time Pro Bowl pick Harrison Smith. With a $5.5 million salary scheduled for 2019 and no guaranteed money remaining, Sendejo was an easy target for cap savings.

The way Harris played in his place last season made the decision even easier. He had three interceptions to match Smith for the team lead, in his fourth year in the league. Harris received a second-round tender worth $3.095 million for 2019, so if another team were to sign him it would require a second-round draft pick to be sent to the Vikings. Minnesota would not receive compensation if another team were to match the contract for Hill, who received a lower tender worth $2.025 million. Hill started 15 games over the last two seasons, before O'Neill overtook him on the depth chart.

After guaranteeing $84 million over three years for quarterback Kirk Cousins in the last offseason and having extensions for defensive end Danielle Hunter and wide receiver Stefon Diggs kick in, the Vikings entered the 2019 league year with far less wiggle room but just as many weaknesses to address.

With outside linebacker Anthony Barr and defensive tackle Sheldon Richardson both set to become unrestricted free agents, the best the Vikings can probably do is bring one of them back.

"The way it is with the cap, we have to budget where we're going," coach Mike Zimmer told reporters recently. "So if it goes to if Barr gets paid $18 million, it probably ain't going to happen, you know? But if it's a reasonable deal, then I think Anthony would love to be here, too."